Mobile commerce has become widespread in the US: 80% of smartphone owners say they have used their devices to help make buying decisions in the past year and two-thirds have made a purchase with their phone, according to [pdf] a study by LEK Consulting.

Moreover, mobile shopping apps are giving on-the-go consumers new ways to compare prices across stores and channels—and the added impetus to seek out the best deals.

Below, additional findings from LEK's report titled "The Marketplace of the Mobile Consumer: What to Expect," based on a survey of 1,600 US consumers.

Many smartphone owners shop via mobile on a regular basis: 39% purchase products (excluding music and video downloads) using their device at least every month.

Such "Active Mobile Users" tend to be younger: Two-thirds of Gen-Y consumers surveyed (those now age 16-24) fall into this category, compared with just 31% of Baby Boomers (age 45-64).

Active Mobile Users like to find deals using shopping apps, and they report conducting the following activities via mobile device while shopping in-store during the previous six months:

Armed with that information, consumers are taking action: Upon learning that a different store in the same chain was selling the same item at a 20% discount, 85% of Active Mobile Consumers would either leave a store and drive to another location, or demand the lower price at the store they were in.

More than one-half of Active Mobile Consumers are willing to share their location with brands in exchange for real-time offers when they "check in" via Foursquare or similar geolocation-based apps.

In particular, 66% of Active Mobile Consumers are willing to share their information in exchange for coupons and discounts, 55% in exchange for loyalty rewards or points, and 37% for access to exclusive sales. 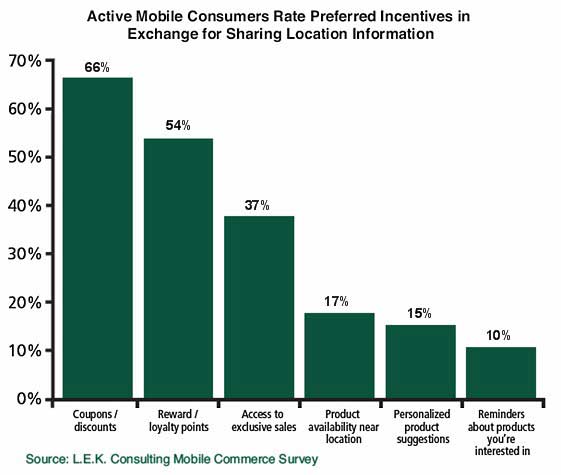 Active Mobile Consumers are less interested in receiving information such as personalized product suggestions from brands and retailers.

Active Mobile Consumers, and by extension a sizable percentage of Gen Y, are much less influenced by traditional information sources than their older counterparts, turning instead to independent reviews, friends and family for recommendations before making purchases: 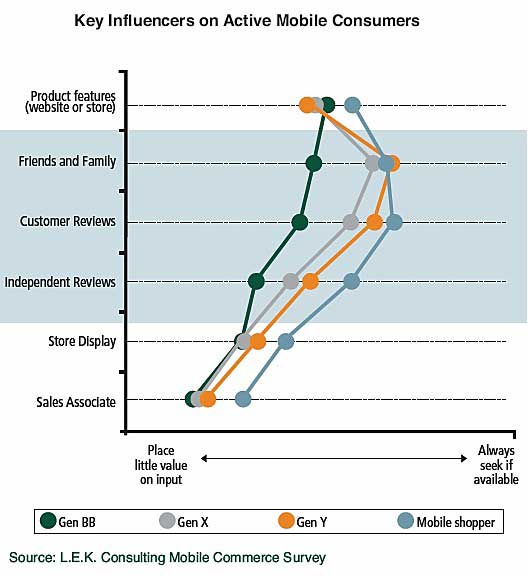 Roughly 40% of Active Mobile Consumers use flash sites (e.g., Gilt Group and Rue La La).  The immediacy of using flash sale sites via mobile creates new opportunities for consumers to keep up with the latest deals on such sites.

For example, 63% of Active Mobile Consumers made a purchase via flash sale quickly because they thought the product they wanted might sell out. 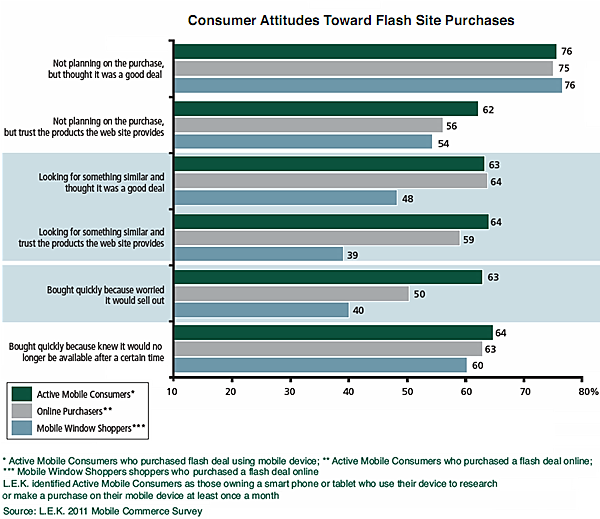 Moreover, 64% of Active Mobile Consumers made a purchase via flash sale because they were looking for a similar product and trusted the products the vendor provides.

About the data: Findings are from the report titled "The Marketplace of the Mobile Consumer: What to Expect," based on a survey of 1,600 US consumers, conducted by LEK Consulting in May 2011.