The use of blogging, Twitter, and Facebook among the nation's largest companies has leveled off in 2011, according to a new study by the University of Massachusetts at Dartmouth.

Among companies listed on the 2011 Fortune 500, the use of three key social media platforms–Twitter, Facebook, and blogs—has increased slightly or stayed flat over the previous 12 months:

Below, other findings from "The 2011 Fortune 500 and Social Media Adoption: Have America's Largest Companies Reached a Social Media Plateau?" issued by the Center for Marketing Research at the University of Massachusetts at Dartmouth.

Some 308 of the 2011 F500 (62%) have a corporate Twitter account with a tweet in the previous  thirty days; among them, 10 corporations (Wal-Mart, Exxon, Chevron, Conoco Philips, Fannie Mae, General Electric, Berkshire Hathaway, General Motors, Bank of America, and Ford Motors) consistently post to their Twitter accounts.

Interestingly, the 2010 study revealed that four companies in the medical and healthcare industries had Twitter accounts with no activity. In 2011, those same four companies (Humana Health Care, Boston Scientific, United Health Group, and Cardinal Health Care) were found to have no registered accounts. Such was the case for the food chain Winn-Dixie, which now has no Twitter presence (or public-facing blog).

The F500 companies with Twitter accounts hail from a cross section of industries.

Specialty retail industry (Home Depot, Lowe's) now has the most Twitter accounts (25), taking over first place from the Food industry (23 accounts). Insurance companies increased their use of Twitter slightly, from 20 corporate Twitter accounts in 2010, to 21 in 2011. 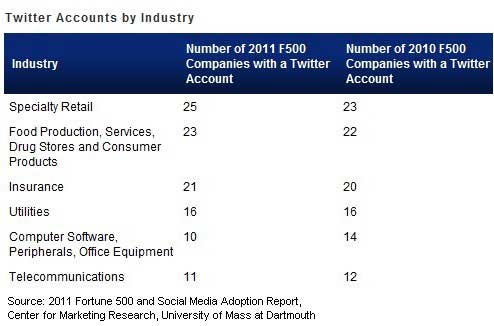 The utilities industry maintained 16 Twitter accounts in 2011 from its 2010 level, while both computer software and telecom lost accounts during the year, 4 and 2, respectively.

The position of companies on the F500 ranking also appears to influence the use of Twitter: All the top 10 companies have corporate Twitter accounts, 49% of of the Twitter accounts belong to the companies in the top 200 on the list, while 34% come from those ranked in the bottom 200.

The 308 companies with Twitter accounts have a substantial follower bases, led by Google with more than 3.3 million followers and Whole Foods Markets with nearly 2.0 million (at the time of writing, Aug-Sept, 2011). 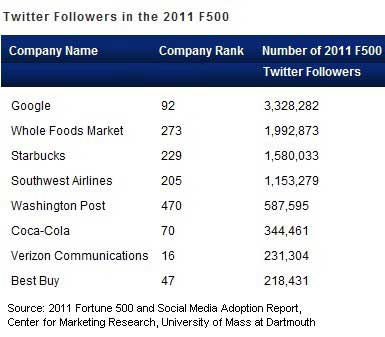 Insurance companies of the F500 are most likely to have a Facebook presence, followed by companies in Specialty Retail, and Food, Drug and Consumer Products. 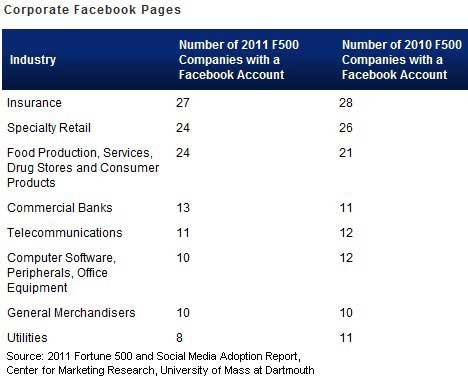 Utilities companies listed on the F500 are the least likely to have a corporate Facebook page.

The chart (below) lists the top 8 F500 companies ranked by Facebook fan levels (at the time of writing), led by Coca-Cola with 32.3 million and Starbucks with 24.1 million fans. 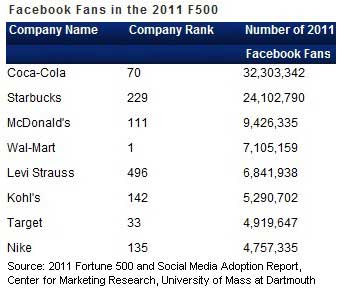 The adoption of public-facing blogs among the F500 has remain essentially unchanged since 2009 (when 22% of F500 had public-facing corporate blogs).

In 2011, the 114 companies with blogs come from a wide cross section of industries.

Tech companies such as Dell and Xerox (which sell software, peripherals, and office equipment) have had the most blogs in all three years of the study, but that sector lost its top position in 2011 to specialty retail (TJX, Dollar Tree, and Bed Bath & Beyond), which now leads with nine blogs.

A partial list (below) shows those industries with the greatest presence in the blogosphere: 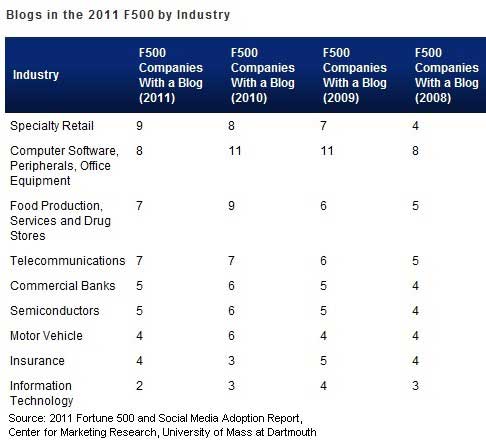 Those figures are consistent with those from 2008, 2009, and 2010. Interestingly, adoption remains lower in the bottom 200 than in the top 200 for the fourth consecutive year.

About the data: Findings are from the study titled "The 2011 Fortune 500 and Social Media Adoption: Have America's Largest Companies Reached a Social Media Plateau? " by Nora Ganim Barnes, Ph.D., Center for Marketing Research at the University of Massachusetts at Dartmouth. Data was collected in August and September 2011.