Though more than two-thirds (68%) of surveyed Internet users say they use Facebook, only 21% have "liked" a branded page on Facebook, whereas more than one-third have given a thumbs up to other Facebook content* such as wall posts (36%), pictures (37%), and comments (37%), according to a survey from Crowd Science.

More than one-quarter of surveyed Internet users say they have "liked" video content on Facebook, while nearly one in five (19%) say they have not clicked the "like" button.** 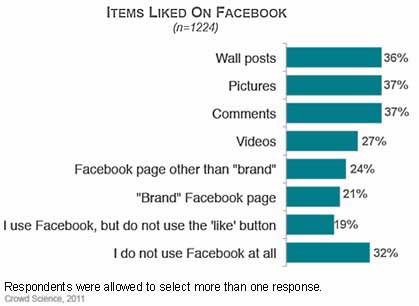 Below, additional findings from a survey conducted by Crowd Science. 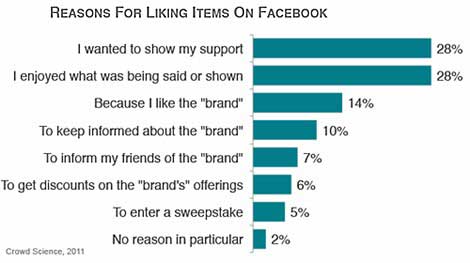 Some 14% of those who "like" brands say they have like items on Facebook because they simply like a brand and 10% want to stay informed. Keeping other friends informed (7%), discounts (6%), and taking advantage of a sweepstakes offer (5%) are less important to online users.

**Respondents were asked "which, if any of the following, have you indicated you like, by clicking the "like" button on Facebook?" Data presented in the chart were provided to MarketingProfs by Crowd Science and are actual responses by percentage of respondents.