Mobile email viewership is climbing: Some 23% of email messages were viewed via mobile device* during the six months ended September 2011, up 34% from the previous six-month period, according to study by Return Path, which also found that Monday is the worst day of the week for mobile email viewership.

The growth in mobile came at the expense of webmail (e.g., Yahoo, Gmail) and desktop viewership: 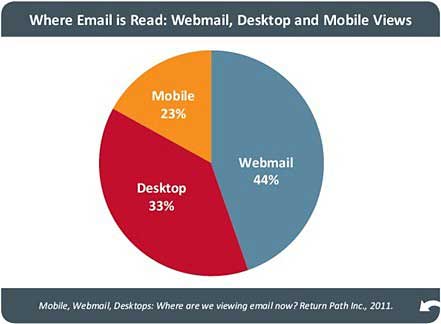 Below, other findings from the study by Return Path, based on email campaigns sent from April to September 2011.

Among email messages viewed via desktop, Outlook accounted for 63% of views, followed by Apple Mail with 31%. The next closest were Thunderbird and AOL Desktop with about 3% of email views each.

The total number of opens via iPad in the six months ended September increased 73% over the previous six-month period. Email views via iPad jumped 12% between March and April, when the iPad 2 launched, then continued steadily upward. 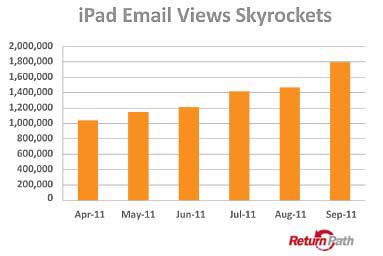 How Day of Week Affects Email Use

Email viewing—and the devices people use to access email—vary during the week. For example, there is a big dip in desktop usage over the weekend, with a corresponding rise in both mobile and webmail use: 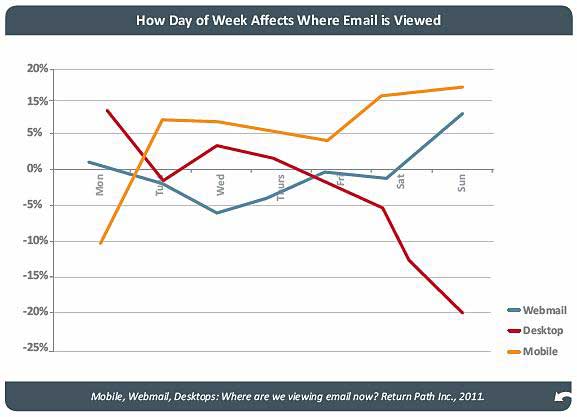 Monday seems the worst day of the week for mobile email viewership, with mobile opens at their week-long low.

* The term mobile is defined in this report as mobile email, with opens recorded wherever the user is within the mobile environment, including the native email client, as well as email opens on a mobile Web browser or within an email app. Also included are opens on smartphones and tablets.