Some 89.6 million Americans used their mobile phone to access email for work or personal purposes during the three-month period ended November 2011, up 28% (19.5 million) from the 70.1 million who did so a year earlier, according to comScore Data Mine.

In November, more than three-quarters of smartphone owners (78%) used mobile email. Among all mobile users, (smartphone and feature-phone users), mobile-email penetration was lower, at roughly 40%. 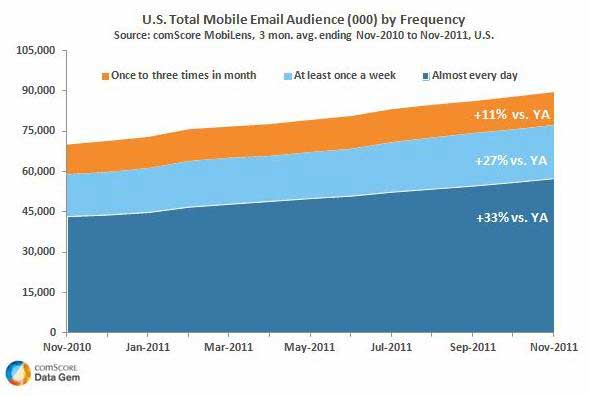 Mobile users who access email via device at least weekly also grew at an impressive 27% year over year.

One-Quarter of Email Opens via Mobile

Nearly one-quarter (23%) of email messages were viewed via mobile devices in the six months ended September 2011, up 34% from the previous six-month period, according to separate research from Return Path.

The growth in mobile came at the expense of Webmail (e.g., Yahoo, Gmail) and desktop viewership: Webmail opens accounted for 44% of email opens during the period, down 11% from the previous six-month period, while desktop opens accounted for 33% of opens, down 9.5%, according to Return Path.