Social networking was the most popular online content category in the world as of October 2011, accounting for 19% of all time spent online, or one out of every five minutes, according to a whitepaper by comScore. 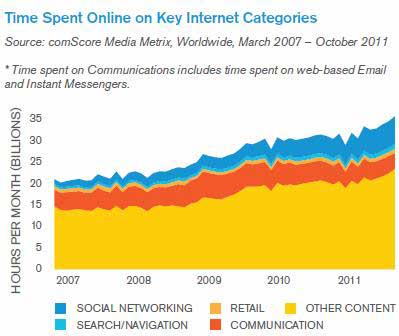 Below, additional findings from comScore's 43-country social media whitepaper titled "It's a Social World: Top 10 Need-to-Knows About Social Networking and Where It's Headed."

Social networking sites now reach 82% of the world's online population, or some 1.2 billion users around the world.

Penetration do levels vary slightly across English-speaking countries: Social networking sites reach 98% of online audiences in the US and UK; 96% in Australia; and 94% of Canadian online populations.

As global social networking use continues to expand, there is an apparent shift in geographic footprint of some of the major sites.

The top-tier global social networks have been traditionally dominated by US-based sites, but the markets where these networks have the greatest reach today are no longer limited to the US, or in some cases, even to English-speaking countries.

LinkedIn, which overtook Myspace in 2011 to become the fourth largest global network, is an example of a top US-based social network attracting legions of users outside of its local base. Similar to Facebook and Twitter, most of LinkedIn's user base (61.8%) now resides outside the US. 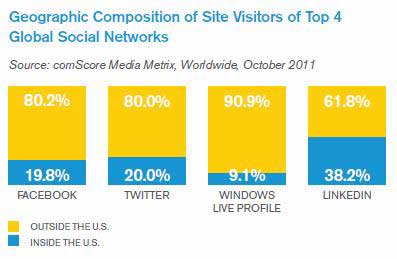 Although LinkedIn generates most traffic via US users, it has its highest market penetration in the Netherlands, where it reached more than one-quarter (27%) of the Dutch online population as of October. Ireland was No. 2  in LinkedIn penetration (20.4%), followed by the US (18.7%), Canada (17.5%), and Denmark (17.4%).

Facebook has proven to be the indisputable global leader in social networking.

In 2010, Facebook was the category leader in 30 of the 43 markets for which comScore reports. Since then, it has taken the lead in six additional markets, spanning Asia, Latin America, and Europe. 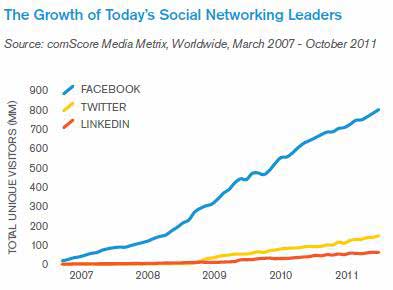 The Emergence of Google+

Google's release of its own social networking platform, Google+, earlier this year quickly generated buzz and excitement, as users clamored to try it out. The site surged to 25 million global unique visitors faster than any other social network in history, reaching this impressive number in less than a month.

To put that audience growth in perspective, it took Facebook 36 months and Twitter 33 months to achieve similar heights. 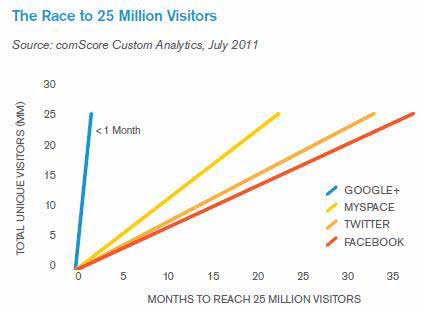 Google+ reached 65 million global visitors (as of December 2011), accounting for 5% of the global social networking audience.

Among the top five global networks, Twitter and LinkedIn have posted two of the highest growth rates for audience size over the previous year, up 59% and 55%, respectively, positioning them as strong global players. 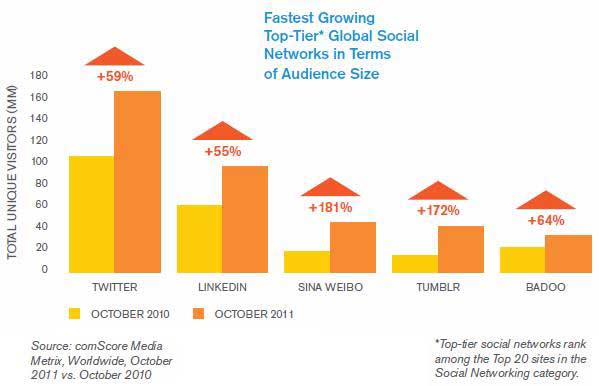 Other top-tier social networks on the rise are Sina Weibo (Sina Microblogging, now with a newly launched English version), which recorded the highest growth at 181% year over year (YOY), and Tumblr, up 172% YOY, and European-based Badoo, up 64% YOY.

If the relative growth of such sites is any indication, microblogging is likely to emerge as a pivotal force shaping the future of social networking behavior, comScore notes.

Who Spends the Most Time on Social Networks?

Across the world, people spent a total of 6.7 billion hours on social networks in October.

In North America and Europe, women spend an average of nearly two hours (30%) more than men on social networking sites per month.

About the whitepaper: Data are based on the 43 countries for which comScore reports individually, by comScore Media Metrix Worldwide and comScore Custom Analytics, October 2011.