Republican presidential candidates have made social media an integral part of their campaign efforts to win the White House in 2012—signing on to various social networks in hopes of reaching key constituents—and marketers can learn a lot by watching the political campaigns at work, according to a study by iContact.

The new study explores how the Republican candidates are using social media to share messages and engage voters, and offers insights and recommendations for businesses that use social media.

Below, findings from iContact's study.

Overall, Facebook is the top social platform among the candidates* studied with the largest volume of fans/followers and engagement levels.**

Interestingly, among the top three contenders—Newt Gingrich, Mitt Romney, and Ron Paul—each has a clear advantage on one of the three major platforms studied, Facebook, Twitter, and YouTube: 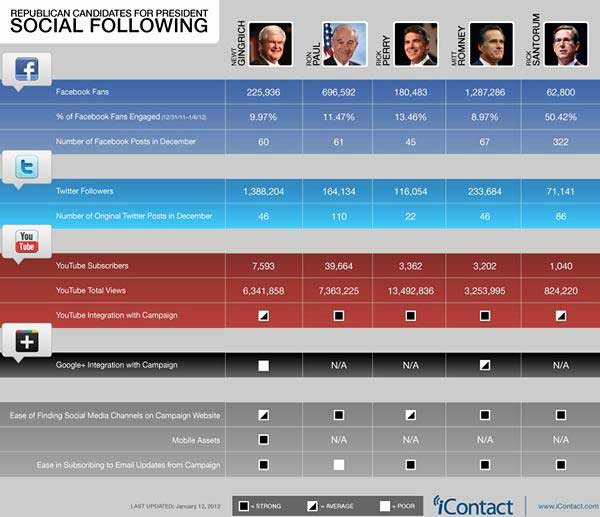 Facebook's strength is no surprise to the small business community. In October 2011, iContact found [pdf] that 76% of surveyed small businesses "favored" Facebook. Moreover, with more than 800 million users, Facebook has announced several upcoming changes aimed at maintaining its dominance in 2012.

Other findings related to the Republican candidates' use of social media, and the business takeaways they highlight, issued by iContact:

*Rick Perry was still in the GOP race on Jan 12 (when the study was conducted) but dropped out on Jan 19.

**Engagement is defined in the study as someone taking an action such as "liking" a page or page content, writing comments, sharing content, answering a question, responding to an event, mentioning or tagging the page, checking in in at a location, or recommending the page.

About the data: The iContact social media audit was conducted on January 12, 2012. Engagement levels were tracked for the week of Dec 31, 2011 to Jan 6, 2012. The findings do not reflect the political views or opinions of company. iContact's October-2011 Social Media study was based on a poll of iContact's small business customers, conducted in the third quarter of 2011.