Social Media Is a Corporate Blind Spot for B2B Execs

More than one-third (36%) of US executives say they either never consider (7%) or rarely consider (29%) their company's social media reputation when making important business decisions, according to a survey from Zeno Group.

B2B executives are even more likely than their B2C counterparts to ignore their company's social media reputation when considering a business decision, and they tend to be slower to respond to damaging online articles or social media posts.

Below, additional findings from the 2012 Zeno Digital Readiness Survey, conducted by Harris Interactive.

Among the executives surveyed: 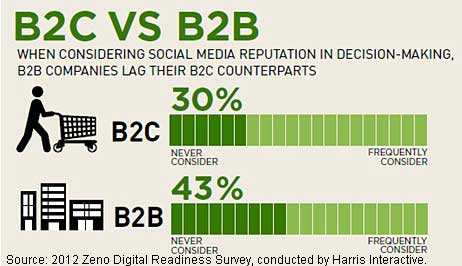 Moreover, B2Bs are slower than B2Cs to respond to negative online content.

When confronted with a damaging article or social-media post, 43% of B2B execs say they believe their firms can respond effectively within a 24-hour period, compared with 63% of B2C execs who say the same:

Some 13% of B2B execs say their firm would not engage an audience online at all to defend its reputation, compared with only 6% of B2C execs who say the same.

Similarly, the findings by company size in terms of revenue show that larger firms (with revenue of $10 billion or more) are more likely than smaller ones (less than $5 billion in revenue) to respond within 24 hours to a damaging issue online (63% vs. 42%).

Geography also plays a role in social readiness. Execs in the northeast are far more likely than those in the western region of the US to be concerned about their company's social media reputation (72% vs. 49%).

About the data: The Zeno Digital Readiness Survey was conducted online among 300 US corporate executives (VPs, CEOs, presidents, and chairmen) at companies with revenue of $1 billion or more, by Harris Interactive, October 4-11, 2012.