When Consumers Will (and Won't) Share Personal Data [Infographic]

Consumers worldwide overwhelmingly say they will share personal information to get better service from their doctors, banks, and retailers, according to a recent report from Infosys.

However, they are very discerning about what they share, and they are sometimes skeptical about how institutions use their data.

Americans, Europeans, and Australians feel comfortable sharing data with doctors (90%), banks (76%), and retailers (70%)—with caveats. Consumers won’t readily share personal medical history with doctors, and they say they want targeted ads from retailers but they are wary of sharing the information to enable such targeting.

Below, key findings from the report, which was based on a poll of 5,000 digitally savvy consumers in five countries (Australia, France, Germany, the US, and the UK) about how they share personal data in the retail, banking, and healthcare sectors. 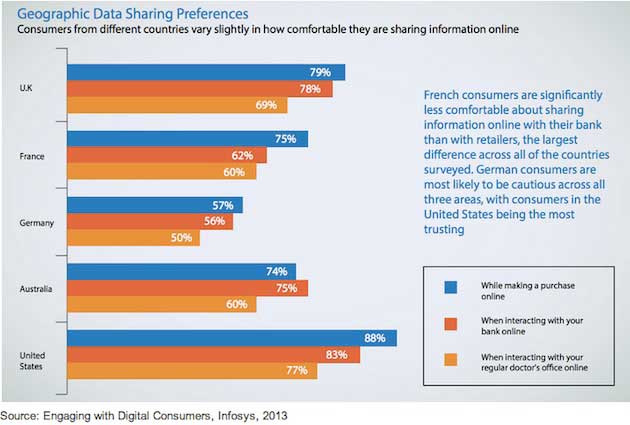 About the research: The report was based on a poll of 1,000 consumers in each of five countries (Australia, France, Germany, the United Kingdom, and the United States) via an online survey, for a total global sample of 5,000 adults age 18-69.