Digital marketers do not believe that the most commonly used tactics for acquiring Facebook fans and Twitter followers are very effective in delivering quality community and audience members, according to a recent report from ExactTarget.

The report was based on data from a survey of 395 digital marketers mainly from the United States. Respondents were asked to first identify the tactics they use to grow their Facebook and Twitter fan bases and then to rate how effective they consider those methods are in producing quality audience members. The survey also polled marketers on the effectiveness of email acquisition tactics.

Some other underutilized tactics with perceived high effectiveness are... 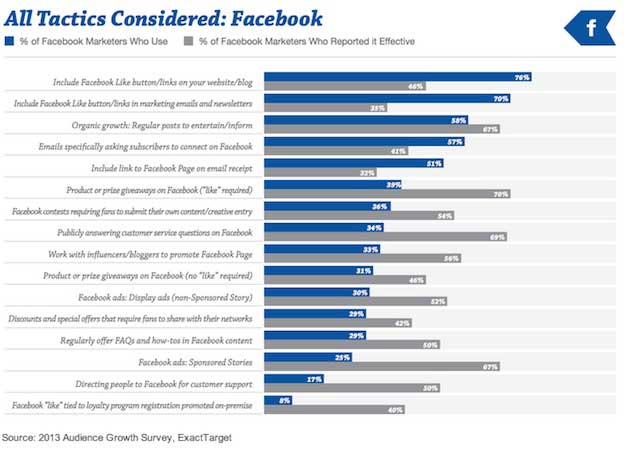 As with Facebook, many of the most popular tactics for acquiring Twitter followers are not considered highly effective in producing quality audience members.

Along with organic growth (45% use, 61% rate effective), marketers cited the following tactics as effective:

Only a small percentage of marketers surveyed use ads to acquire Twitter followers. However, the tactic shows promise: of the 6% of respondents who advertise their Twitter profiles via paid search ads 50% say the tactic is effective. 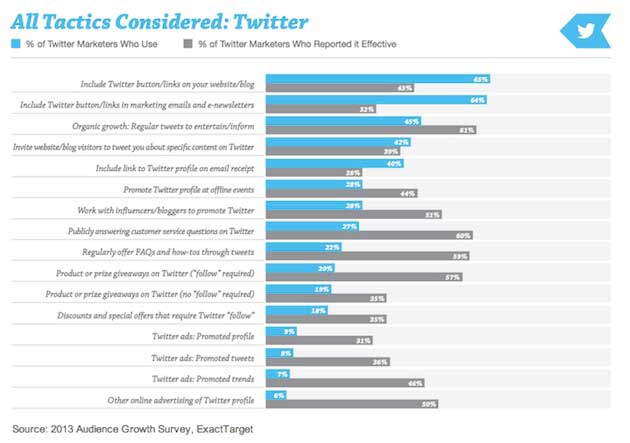 About the research: The report was based on data from a survey of 395 digital marketers predominantly from the United States. Of the marketers surveyed, 36% were B2B marketers, 35% were B2C marketers, and 29% were involved with both B2B and B2C marketing. The survey was conducted between June 20 and August 5, 2013.