Which NFL Teams Are Winning (and Losing) on Twitter?

NFL teams now have 13.2 million followers on Twitter in total, and teams have increased their follower base by an average of 27% since August 2014, according to a recent report from Encore Alert.

The New England Patriots have the most followers of any team (1.17 million), the analysis found. However, that lead is partly a reflection of the team's large market size.

To determine which organizations have the most engaged fans on Twitter, not just the largest markets, the researchers examined how many followers each NFL team has per 100 residents.

By that measure, the Green Bay Packers come out on top with 40.2 followers per 100 residents; the New Orleans Saints (39.9) are second, followed by the Pittsburgh Steelers and Buffalo Bills.

The Arizona Cardinals have the lowest level of Twitter engagement, with just 3.3 followers per 100 residents.

There is only a moderate positive correlation between wins and follower count, the analysis found, indicating that on-field success is not necessarily why some teams are succeeding more on Twitter.

The researchers also found no significant pattern among teams that share a market: The New York Giants and New York Jets both land in the bottom five, whereas the Oakland Raiders and San Francisco 49ers, and the Washington Redskins and Baltimore Ravens pairings are more scattered. 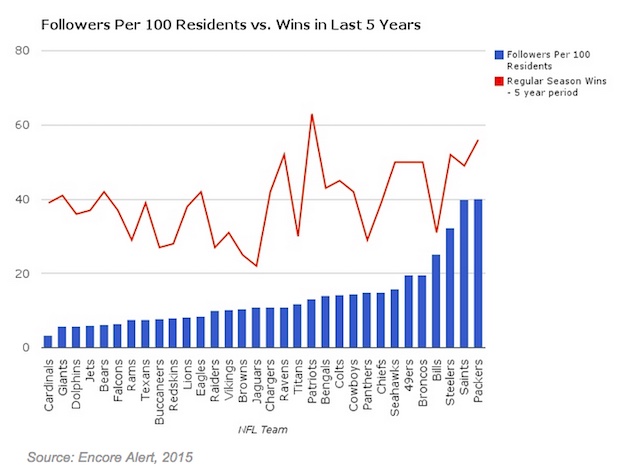 About the research: The report was based on an analysis of each NFL team's total number of Twitter followers relative to the addressable market (number of people living in the relevant Combined Statistical Area).