In What Situations Are Americans Willing to Share Personal Information? [Infographic]

Under various circumstances, many Americans would share personal information or permit surveillance in return for getting something of perceived value, according to a recent report from the Pew Research Center.

The report was based on data from survey of 461 US adults as well as in-person interviews with nine online focus groups of 80 people. Participants were presented with six situations involving privacy tradeoffs, then asked for their reaction to each.

Most respondents (54%) say it is acceptable for employers to install monitoring cameras if there has been a series of workplace thefts, and nearly half (47%) are willing to let stores track their purchases via programs such as loyalty cards in exchange for occasional discounts.

However, most (55%) respondents say they do not feel comfortable allowing a company to install a "smart thermostat" in their home that would monitor their movements in exchange for a potentially lower energy bill.

Most (51%) also would not join a new social media platform that would help them reconnect with old classmates in exchange for a real name, a photo, and permission to serve targeted ads.

For more findings from the report, check out the infographic: 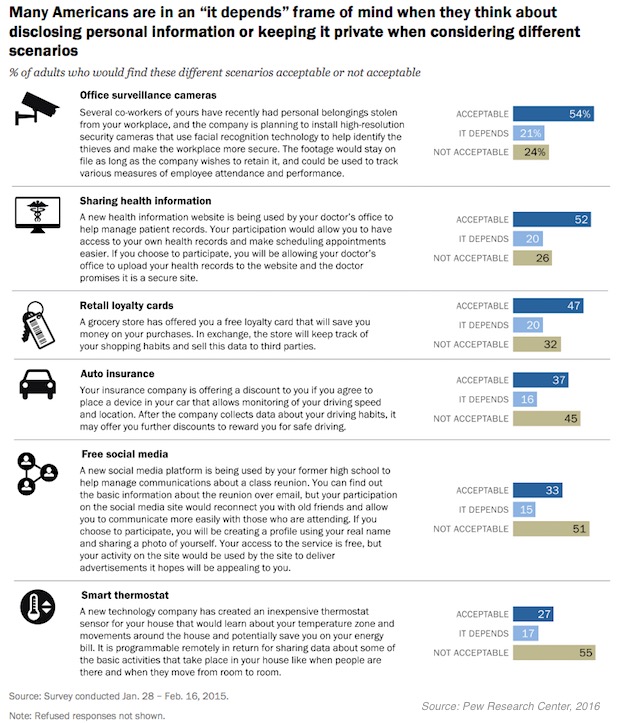 About the research: The report was based on data from survey of 461 US adults as well as in-person interviews with nine online focus groups of 80 people. Participants were presented with six situations involving privacy tradeoffs in exchange for some sort of benefit, then asked for their reaction to each.