Get the scoop on SXSW, which social brands people love most, why Facebook organic reach may vanish, and Twitter-powered Oreo cookies. And the Web turns 25. That's just surface-scratching. Skim for your social submersion!

Happy birthday, World Wide Web! This week we celebrated the 25th birthday of the World Wide Web, the visual layer of the Internet without which none of this magic could be possible. Fast Company's created a brief history of the WWW, which includes the birth of once-iconic social site MySpace. Remember Tom, your first friend? 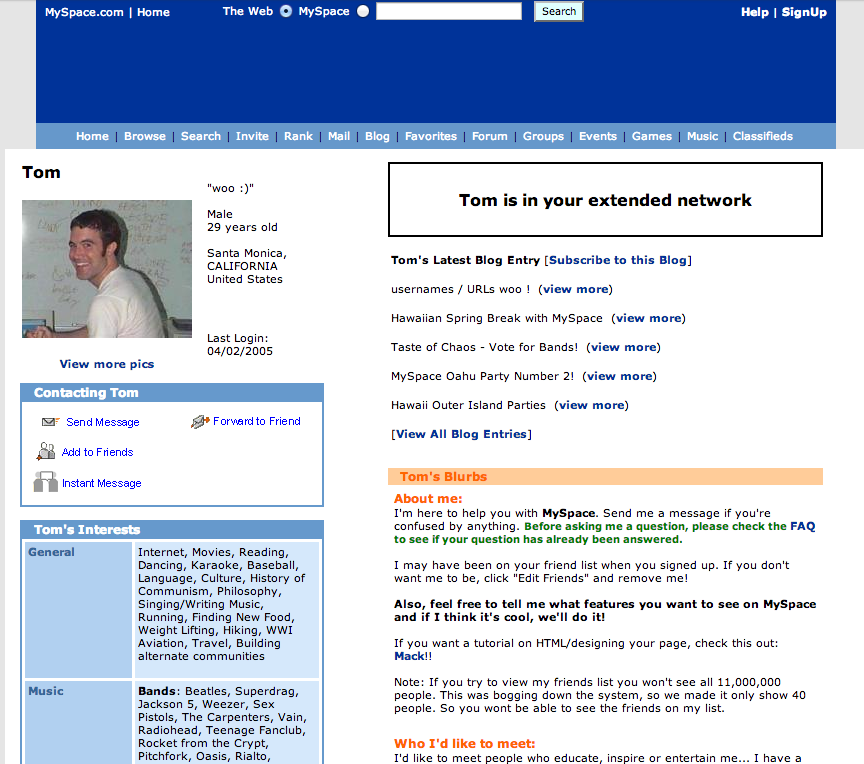 The universal language of GIFs. GIFGIF is MIT students' attempt to build an emotional dictionary out of GIFs, using a hot-or-not-style mechanism that lets users decide which GIF, between two, best expresses anger, for example. Analyses are broken down just below the images... so you'll never have to second-guess your options. 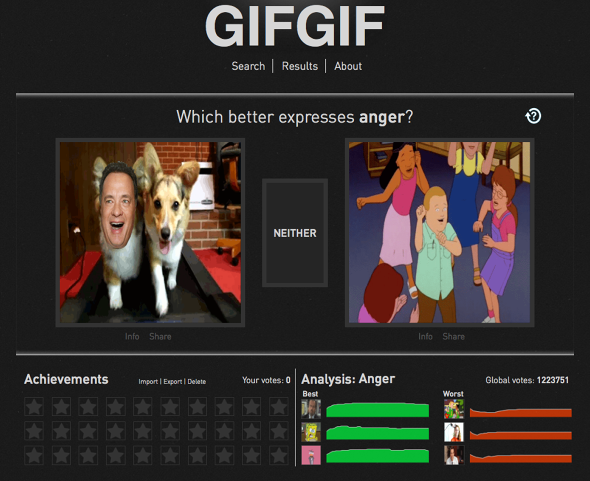 The grit and the glamour of #SXSW. SXSW Interactive happened this week. Poynter gives us the highlights: surveillance, social, and the rise of self. Twitter wowed the crowd with 3D-printed Oreos composed of trending topics (they taste normal, AdAge reports, which is to say DELICIOUS)—a clever mix of curiosity-inducing new technology and our love of the real-time zeitgeist.

Airbnb offered credits to people having #SXSW problems with housing—a more general take on its journalist-facing #Sochiproblems. The Game of Thrones Oculus, a 700-foot elevator-style shaft that bisects the fictional land of Westeros, let people experience the fantasy country for themselves. Way to go immersive!

But what won SXSW's top Activism award will ripple forward in ways that illustrate the change social makes in our world: a campaign that uses the power of countless people to find missing persons, developed by the Australian Federal Police:

The Missing Person Pre-Roll from VML Australia on Vimeo.

Bad news about native. Native advertising is the latest Big Idea, interpreted as marketing that resembles real content. Chartbeat conducted a study to see whether they're effective: 71% of users will read a real article for more than 15 seconds, but only 24% will if the article is actually a marketing promo. That doesn't mean content-rich advertising is a bust; it does mean investing in content that adds value versus just trying to trick people into thinking it isn't an ad. 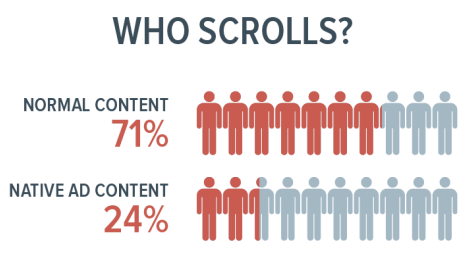 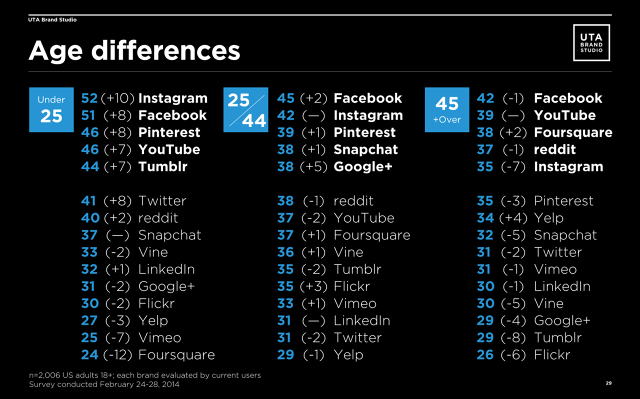 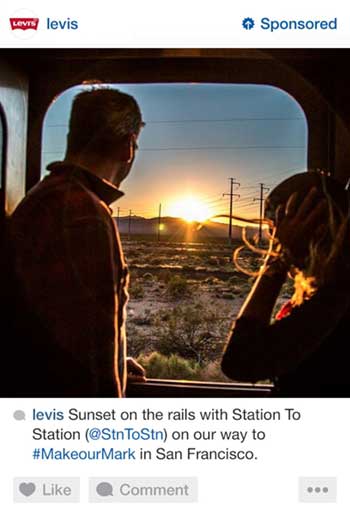 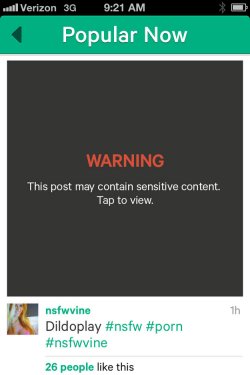 How to make an epic (stop-motion) Vine. Stop-motion animator Dylan Blau did a Q&A with Mashable that operates (handily!) as an artsy Vine guide. (Helpful hint: he storyboards. Ideation is the hardest part.)

Watch for falling prices. Twitter's average ad rates dropped 81% in the last two years—18% in the last 3 months in 2013 alone, meaning a Sponsored Tweet may be within reach of everyday SMBs (and not just Oreo). Per Twitter: "As we continue to optimize for advertiser value and the overall user experience, the cost per ad engagement may continue to decline over time, and we expect the cost per ad engagement to decline in the near term." Hooray for market maturity? 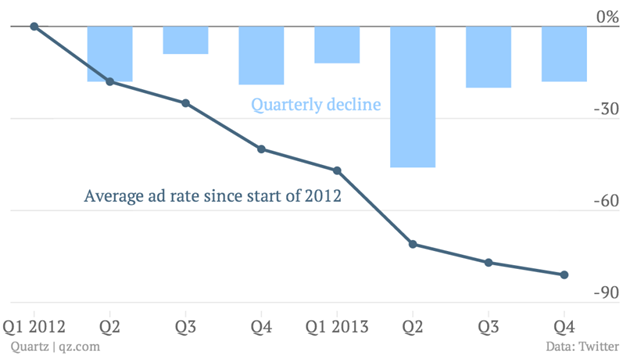 To cash in on direct response, Twitter also plans to beta-test a click-to-call feature, which could drive local businesses to make the jump to 140 characters.

Case of the Mondays? Twitter's using its data to give context on real people, who are more likely to tweet that they're "feeling sad" on Sundays in December or Mondays in October. Late for work? It's probably mid-week in July... or Fridays in January. "Hangover" occurs most in tweets on Sundays in March, and Thursdays and Fridays in November. 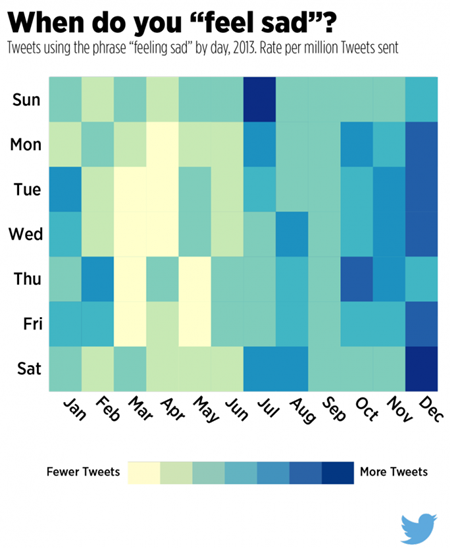 Feelings are contagious on Facebook. PLoS One gathered anonymized status updates from cities between 2009 and 2012, then ran it through a feelings auditor. What did it find? Venting on Facebook makes other people ragey, too. In happier news, positive emotions are more contagious than negative ones—maybe because we all want to be happy in the end. 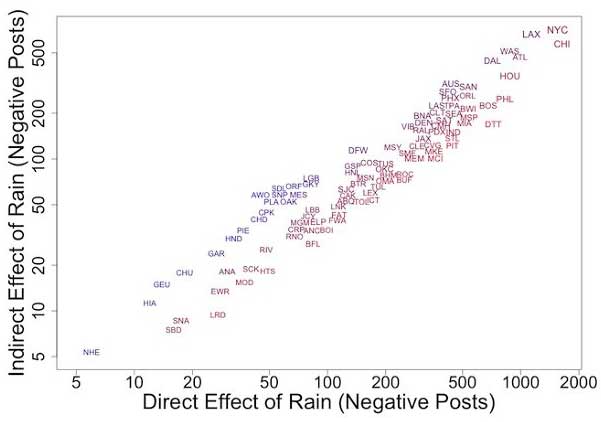 Life after organic reach. Social@Ogilvy posits why organic reach on Facebook will fall to zero, at least for content brands. Last month, organic reach fell to 6%—a vertigo-inducing fall from October 2013's 49%. For pages with over 500,000 likes, it fell to 2%. Does this mean there's no point in improving your Facebook content? No, because it ensures better cost-per-engagement and cost-per-likes if you're advertising. But if you haven't already, whip out your credit card if you want to be seen at all.

Facebook Zero: Considering Life After the Demise of Organic Reach from Social@Ogilvy

Don't let FB shut your page down! MakeUseOf compiled four good tips for making sure Fans see your ads, keeping ads compliant (they should never be more than 20% text), avoiding sweepstakes that will upset Facebook, and more. The advice is basic but critical.

Why should YouTube have all the fun? Wonder PL wants to take on YouTube and Vimeo with a video site dedicated to lifestyle content. Its features include video recommendations based on mood, and the ability to customize your video player. Content partners include Universal Music (also an investor), House & Gardens, and the National Film Board of Canada. Careful, though: producing content for Wonder will cost about $300 per year (for users, it's free). The app is only available on iOS (but an Android version's coming soon).

Don't plan, Popp. WePopp lets you plan hangouts or meetings without having to field 40 back-and-forth emails with five other people. Propose your date and event, get consensus, then launch. Extra details (like who's bringing the picnic basket... or the TPS reports?) can be managed in a chat feature.

Don't ride bad news. Today in hard-earned lessons: a community manager at Volvo Cars used Chinese Twitter-style service Sina Weibo to promote Volvo's safety priorities... on the back of the missing Malaysia Airlines plane. The post: "The rescue operation for the missing Malaysia Airlines MH370 plane is in full swing. Passenger safety is also a top priority at Volvo Cars, let's pray together for the 239 lives that were on board the plane. Bless them, and may a miracle occur."

All hell broke loose, and an apology was quickly dispatched. Never use a tragedy as a marketing opportunity—unless you can improve the situation. It's just bad form. And train your CMs (and social media managers) to be sensitive to these types of situations! Too often people are just looking for the next big wave to ride, and lose their sense of which waves to avoid. 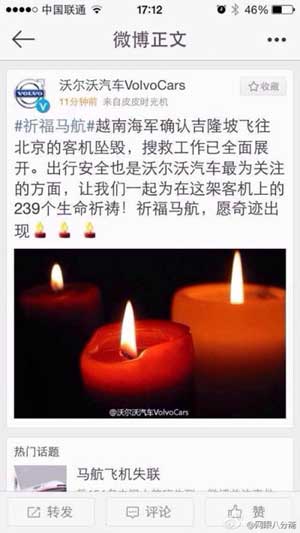 We wrap with an epic vintage selfie, taken of (and by) Colin Powell a whopping 60 years ago. We love that it was posted on Facebook... with a special dedication to Ellen DeGeneres. Fast Company's also compiled a brief history of vintage selfies. You thought we were the only generation that navel-gazed with cameras in hand? Please!