Facebook buys Oculus, and the crowd cheers (or does it?)! Twitter enables photo collaging and tagging. And one powerful project takes you back in time... via The Office. It's all in this week's #Socialskim!

Take a trip back without leaving your cubicle. To highlight the importance of fair use and show how prevalent borrowed culture is in making anything good, Joe Sabia created The Office time machine. The project lets you pop in a date, then provides a supercut of "The Office" references about that time period. From Joe: "Culture is...what surrounds us and unites us, and it allows us to collectively laugh at a joke in The Office about Ben Franklin or M. Night Shyamalan. Culture, simply put, is the seasoning in a meal." A Google Docs working group has also been created to help Joe correct any mistaken references in the videos. Don't you love the crowd?

Facebook buys Oculus. Facebook's purchased Oculus VR, a virtual reality tech provider with the capacity to immerse you in a fictional environment. Why? Facebook is betting on virtual reality's becoming tomorrow's Facebook. In Zuck's words: "This is really a new communication platform.... Imagine sharing not just moments with your friends online, but entire experiences and adventures." Think of it: You could LIVE in Facebook, all the time. Some think the purchase bodes well for the future of Oculus for its growth attitude toward acquisitions: Instagram's still running strong, and that's more than what we can say for social sites that Twitter or Yahoo have purchased (RIP, Posterous and Flickr). Many, though, are terrified—a reaction so strong it drove Oculus co-founder Palmer Luckey to defend the company's decision, promising there wouldn't be any "specific Facebook tech tie-ins" with future products. 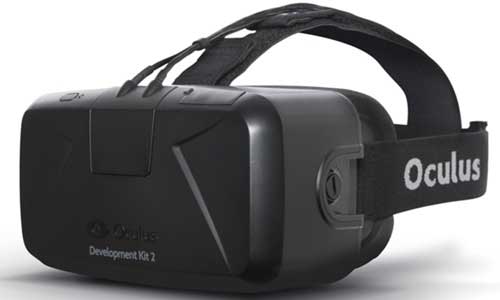 Twitter Instagrams it up. iPhone and Android users can now upload up to four photos in a tweet—and tag up to 10 people in a single photo—without affecting their 140-character limit. (Adjust notifications, and make decisions about who can tag you, in Settings.) Multiple photos create a four-photo collage that appears nicely in streams. This is a big step in making Twitter more visual, and adding a social element to photo-sharing that Instagram's had for a long time. 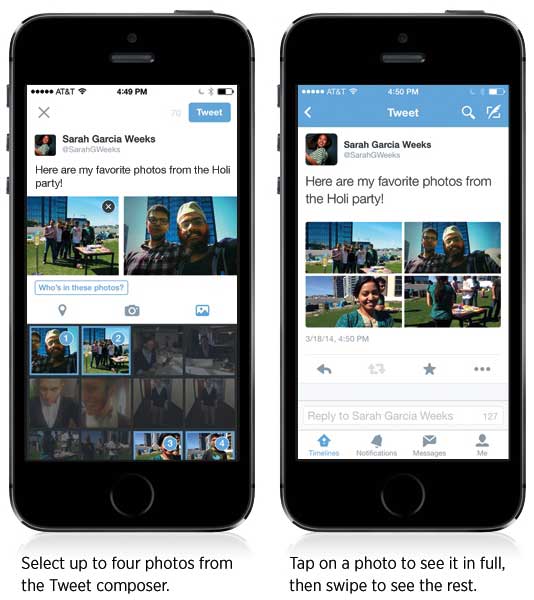 Ford will make you love electric cars again. Super Bowl Sunday last month left us with plenty to argue about—but at the top of the pile was Cadillac. Its elitist, pro-Manifest Destiny "Poolside" ad actually got people to hate luxury electric car buyers. Ford got scrappy and shamed Cadillac with its own electric car ad: A risky move that left it smelling like roses because it defended people who care more about improving their communities—a resonant social media value—than about acquiring more stuff. Talk about a social statement! Plug that car back in.

The infographic guide to new Facebook image ratios. Want to make sure your images are totally visible, and not cut off, on Facebook? Gain, maker of a paid app that lets you schedule social content and ensure that your images are optimized for Facebook, released an infographic that details the new image sizes required for Facebook's revamped newsfeed. It's more convoluted than you think, so this is one you'll definitely want to print out and pin to the cubicle wall. (Or your graphic designer's.) 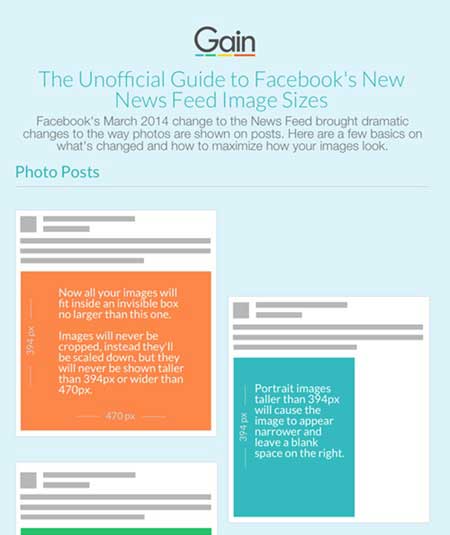 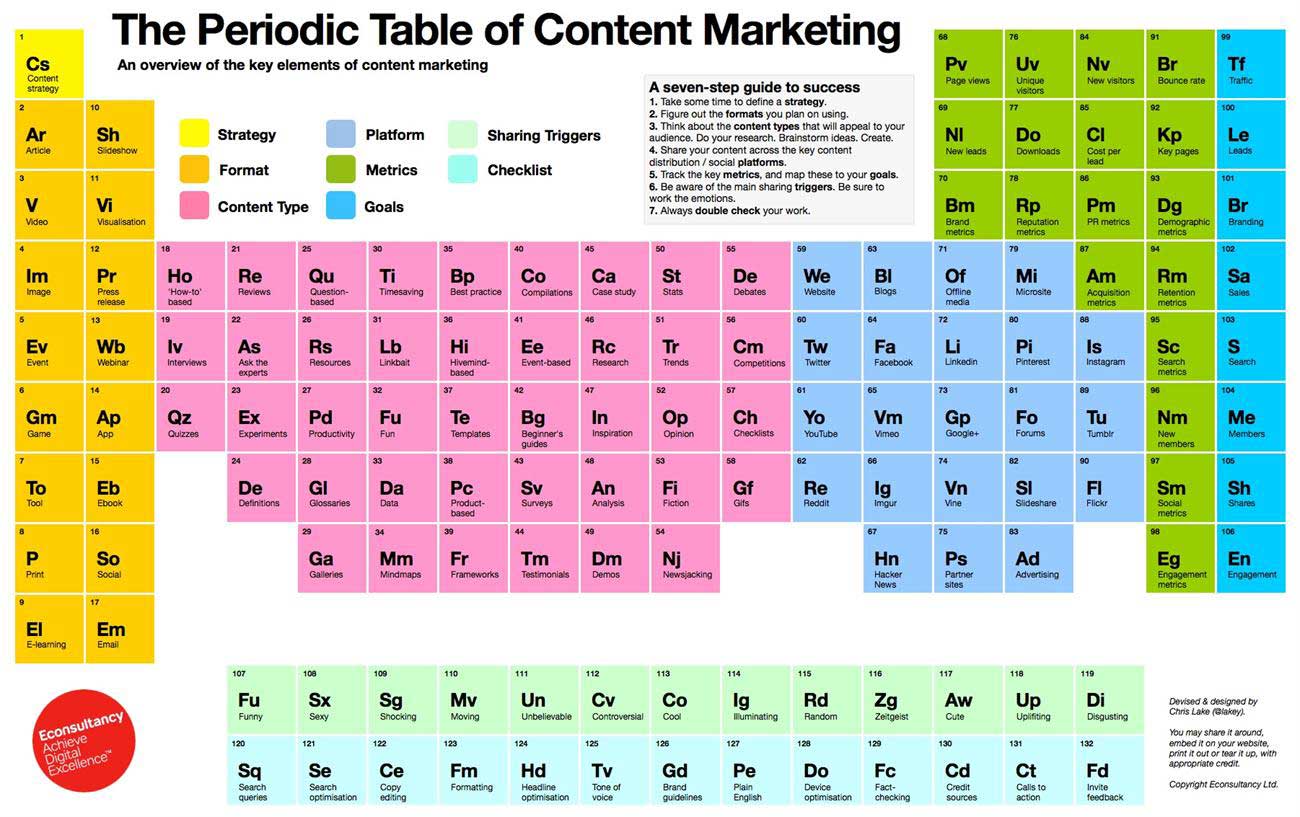 Hot for Instagram. An eMarketer study finds that US Instagram use jumped 35% in 2013, rivaling Twitter among smartphone users. 17.6% of the internet user populace used Twitter once a month last year, while Instagram accounted for an equally impressive 16.1%. But by the end of this year, nearly 25% of US smartphone users will use Instagram monthly—which explains why Twitter's so hot to steal a slice of that pie. 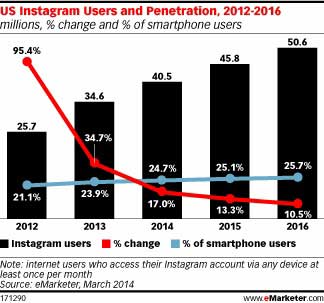 Twitter helps, and doesn't hurt, TV! Here's happy news for networks and producers: a study by Fox, Twitter, and the Advertising Research Foundation finds that 92% of Twitter users take immediate action around a show based on what's appearing on their feeds. That is, after seeing related Twitter activity, a user might watch a show for the first time, or go back to a show they've dropped, or change the channel, or look for the show online. Tweets from actors, hosts, judges, or other show participants are the most influential, followed by friends and family, then official show handles. 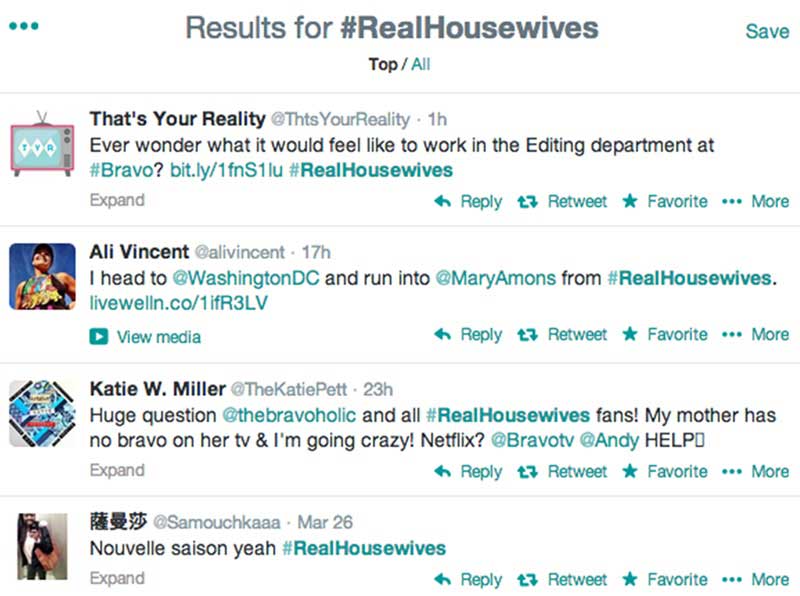 You can't trust Facebook organic reach. We've drilled the point home before, but a Social Media Today article explains clearly why Facebook organic reach will soon hit zero. And that's within Facebook's rights—it isn't Google, after all, so the laws of SEO don't apply here. The bright side? Buying Facebook advertising yields more views for less money than most other options—including newspaper ads, magazine ads, Google AdWords, and LinkedIn ads. You'll still have to produce great content, though. (Just remember to "boost" it.) 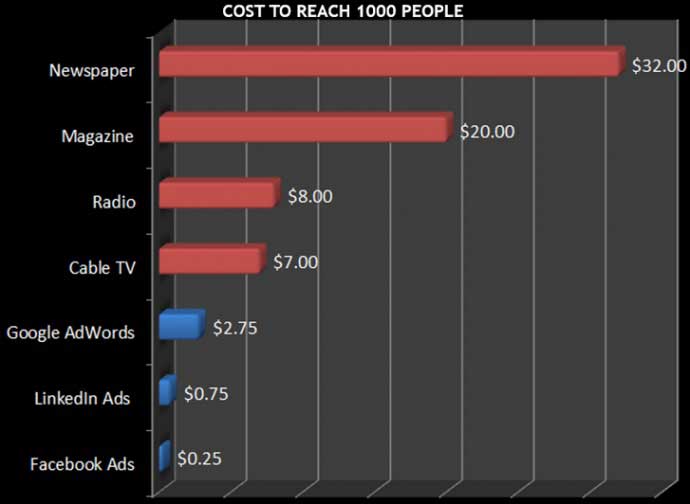 Hashtag-happy? Hit the brakes. New Socialbakers data found that the more hashtags a brand uses in a Facebook post, the less engagement it gets. One or two hashtags is the sweet spot (generating an average of 593 interactions across 200,000 brand posts); your engagement drops significantly once you start drifting into the 3-5 range (416 interactions). 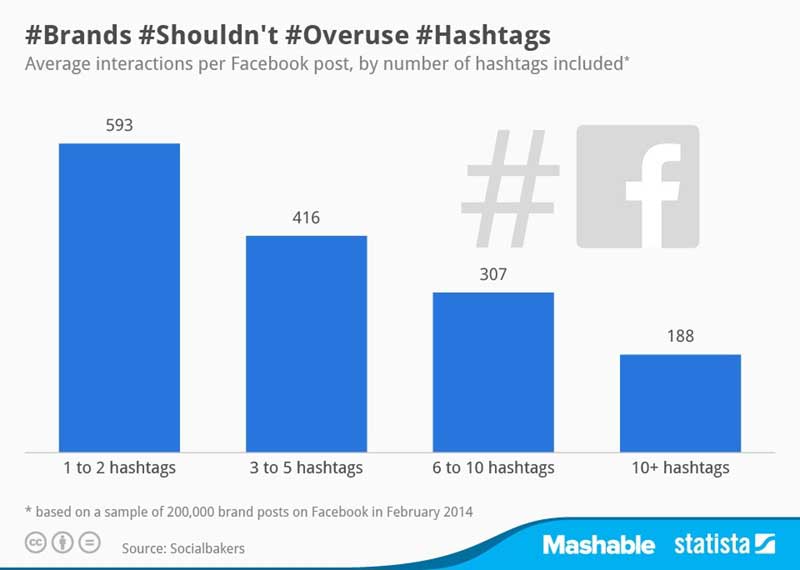 Focus on the bottom line. Later. Herbert Lui provides a strong argument for shunning ye olde "pageviews" metric in favor of something more holistic. Instead of chasing pageviews, chase engagement: Focus on telling a story that encourages people to spend time with you, or in this case your page (which is more valuable than pure pageview numbers). Instead of building traffic, which amounts to an anonymous number of heads, build a loyal audience that returns frequently. Finally, conversion isn't your enemy; you should always keep it in mind. Channeling 99U managing editor Sean Blanda: "Most branded content has a conversation in mind—an email sign-up, a purchase, etc. That's what you measure. I'd rather have 1,000 dedicated readers and convert 10% of them, than have 100,000 and convert no one."

All the newsy stock footage you'll ever want. Reuters launched Access, which offers thousands of its photos and videos for purchase. Because why go Getty when you've got teams of photojournalists on your side? Think of all the majestic bird photos at your beck and call.

We'll wrap with something befuddling. For McSweeney's, Kendra Eash wrote a poetic advertising takedown called "This is a Generic Brand Video," listing the tropes often seen in your typical multimillion-dollar spot. Stock video provider Dissolve then took the text and set it to stock video clips that are available for sale on its site. From Dissolve: "The minute we saw Kendra Eash's brilliant 'This Is a Generic Brand Video' on McSweeney's, we knew it was our moral imperative to make that generic brand video so. No surprise, we had all the footage." Watch it below. And if you like a scene... well, you can buy it.