Get the scoop on Instagram's new spin-off app Hyperlapse, Twitter's plans to send agencies to #FlightSchool, Facebook's latest ad offering, and why the Feds are watching tweets way more closely than they used to. Skim to take your savvy to the streets!

Whats in a name, anyway? Google has nixed authorship, dropping authors' bylines (names) from search results. The move was made official with an announcement on Google+: "we've made the difficult decision to stop showing authorship in search results," wrote Google's John Mueller. Google authorship launched in 2011, including author images, which also appeared in search results (and had already recently disappeared). That said, "Search users will still see Google+ posts from friends and pages when they're relevant to the query," Mueller wrote.

Say hello to Hyperlapse. Instagram's just released Hyperlapse, a separate app that lets you make tracking shots and time-lapse videos with surprisingly steady shots. It's already available for iOS, but an Android version is also expected. Wired, which has the full story from the developers, calls it the equivalent to having a $15,000 video setup in your hand. Blow Instagram and Facebook friends away with your impressive video skills:

Before running off, though, also check out Instagram's spankin' new business tools, including Account Insights (for tracking brand awareness via impressions, engagement and reach), Ad Insights, and Ad Staging (preview your creative before it goes live!). 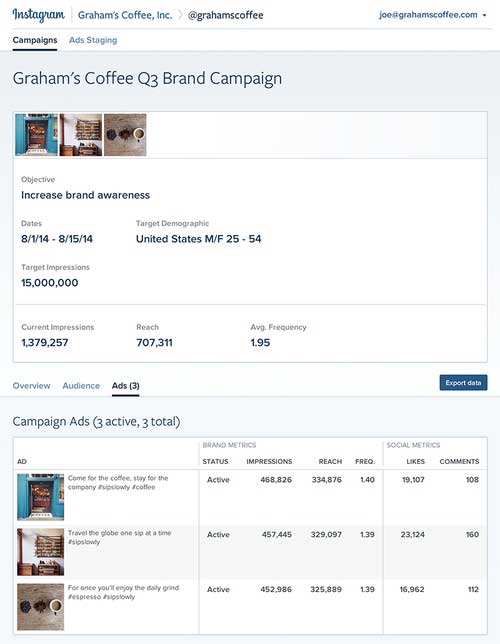 Using YouTubers for back-to-school promos. To promote a new line of jeans, PacSun jumped on the back-to-school wave and partnered with online fashion site StyleHaul, which has over 150 million YouTube subscribers. Four different StyleHaul creators were enlisted to wear the jeans and provide ensemble suggestions to teens headed back to the halls of academia. Tellingly, CEO Gary Schoenfeld of PacSun said, "We know that YouTube stars have influential power with their fans—even more so than celebrities, in some cases—so for us, it was the perfect opportunity to showcase PacSun and its product in a new way." (The proof of that is here.)

Transform YouTube videos into GIFs. If you want the easy spreadability of a GIF without having to work too hard to make one, this YouTube hack may do the trick: simply visit the YouTube video you're pulling your GIF clip from and add "GIF" to the URL, after "www." but before "youtube.com." Example:

This page will lead you to where you can set the start time and duration of your GIF, which you can post where you like. For GIF beginners, this'll be a godsend. But if you want frame-by-frame control or something more precise, try something like GIFGrabber or GIFBrewery instead. (GIFs via TechCrunch.)

Bandwidth targeting is brighter targeting. Facebook now allows advertisers to target ads based on users' network connections: 2G, 3G, or 4G. Users are segmented based on the connection they use most when they access Facebook, meaning you can optimize your creative for each. (Example: target video ads to 3G or 4G users, versus wasting them on 2G users who may not be able to run them.) 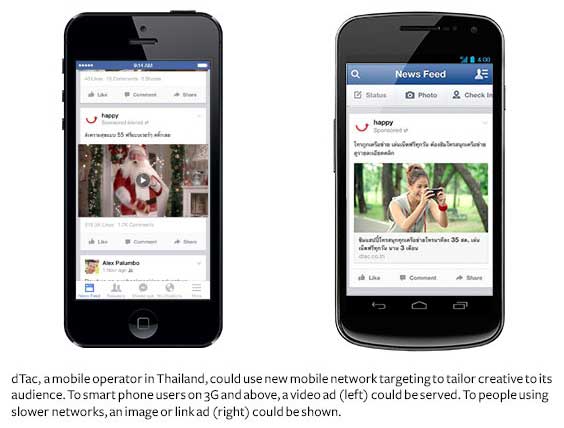 Get to #FlightSchool, become a Twitter Ads maverick. Twitter's launched Flight School, a program meant to educate agencies about its business offerings. The Web-based program is free, and anyone with a US agency email address and a Twitter handle can sign up via desktop, mobile phone, or tablet. Training is divvied into four sections individually targeted to account directors, planners, media buyers, and senior executives. Twitter ad sales already exist in 12 European markets; it hopes to introduce Flight School internationally by Q4.

Facebook Messenger #Mythbusting. In response to widespread angst about the Messenger app (which users must now download separately if they want to read their Facebook private messages), Facebook published a mobile missive that explains why people must download Messenger separately (people respond to their messages 20% faster) and how it uses the camera and microphone (for making calls, sending videos or voice messages, but the mic and camera won't turn on while you're not using it)—the two biggest concerns people had. Good on the 'Book for addressing those concnerns clearly, even if it took some time to do it. 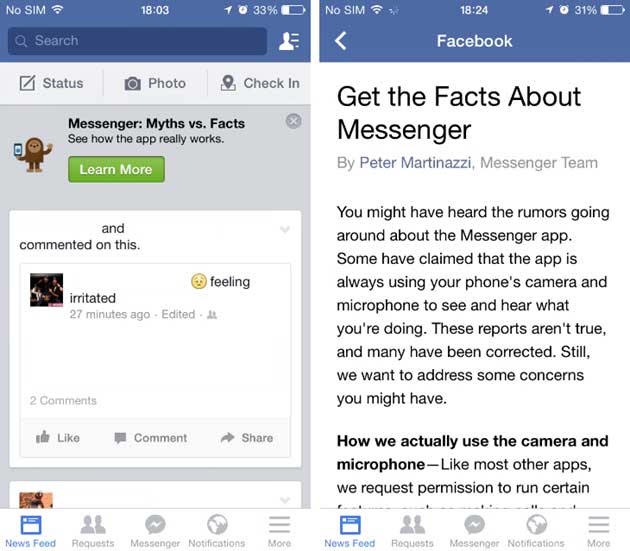 Tag! Your Facebook Page is It. One irritating aspect of using a third-party platform to post to Facebook is that you're not permitted to tag other Pages in posts (unlike Twitter, where you can @mention anybody). To tag a Page, you had to post natively on Facebook. Now an API update lets you tag Pages that you don't manage from third-party platforms, pending review by Facebook. The first platform to integrate it was PerfectPost, used mainly by direct marketers and e-commerce firms. Note that PerfectPost will set you back about $499 a month, but other platforms will likely jump aboard soon. 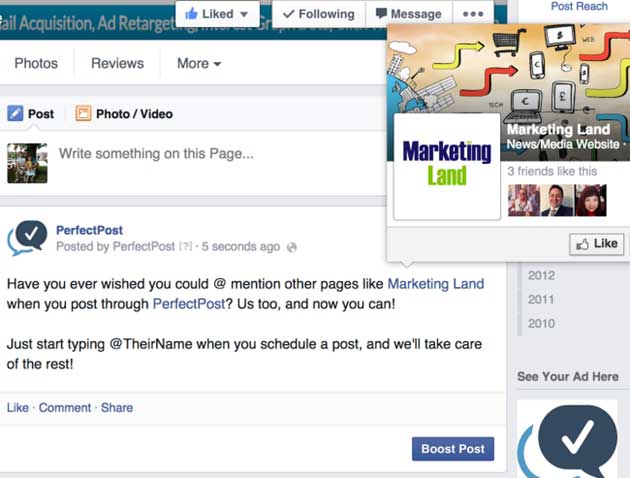 The Feds are monitoring your memes. The US Federal Government spent $1 million to create an online database called Truthy, designed to "detect political smears, astroturfing, misinformation, and other social pollution" on Twitter. (If you're raising an eyebrow, we are too.) Backed by the National Science Foundation and created by Indiana University researchers, Truthy tracks the spread of memes by collecting random samples of tweets and analyzing the contents. Its team hopes the public will eventually use it to report others: "We rely on users like you to flag injections of forged grass-roots activity. Therefore, click on the Truthy button when you see a suspicious meme!" Looks like Big Brother's just enlisted a few helpers (your actual brother?). 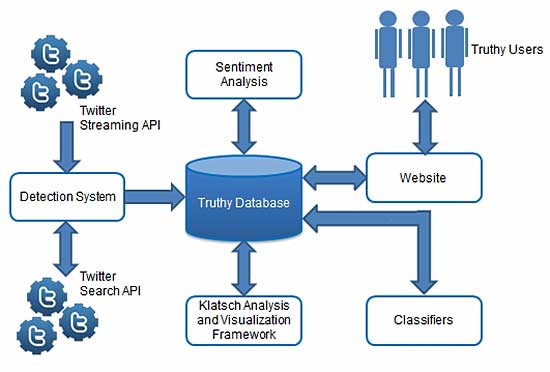 There's a price for privacy, and Snapchat's cashing in. Snapchat—now more popular than Twitter among 18-34-year-olds and freshly valued at $10 billion—is now used daily by 70% of US college students (age 18-24), per a Sumpto study. Compare that with just 11% on of daily posts by the same demographic on Facebook and 46% on Twitter. Interestingly, college students seem to think Snapchat offers the most privacy of any other socnet: 35% ranked it the most secure. Facebook, meanwhile, was rated the least private, with 45% saying so. 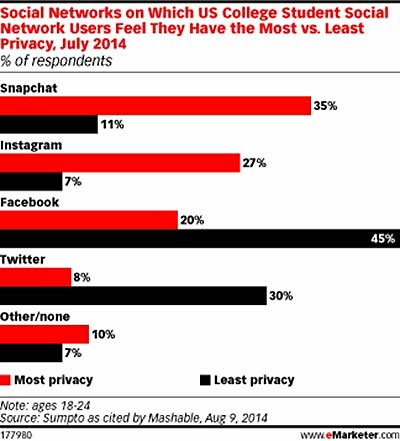 All the celebrities who took the #IceBucketChallenge. The ALS Society has raised $70 million resulting from the enormous exposure it's gotten from its crazy-viral #icebucketchallenge. Here's an infographic of the celebs who participated—and just because we want to, one last video from Old Spice's Isaiah Mustafa, who, while his muscles made icing him impossible, nonetheless pledged $1,000 to the cause.

Tumblr growth is slowing, but we still love it. This year Instagram—which, like Tumblr, had 30 million users when it was acquired—hit 200 million users. According to eMarketer, Tumblr's growth is flattening and will likely never make that figure. Despite stagnation since its Yahoo acquisition, Tumblr's nonetheless slated to grow another 25% by the end of 2014. If you're looking for a creative and arty demographic, and you have an idea for a long-form posting campaign, it's still a great place to post: One artist used it to playfully highlight IKEA furniture doppelgangers in classical art. 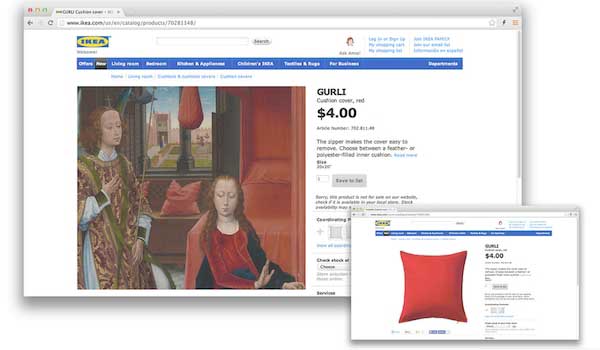 Does social networking make people less opinionated? A Pew Research study finds that people who use Facebook and Twitter are less likely than others to share opinions about contentious issues... even when they're offline. But the team hypothesizes that short of censoring people, social media sensitizes them to different views: "Because they use social media, they may know more about the depth of disagreement over the issue in their wide circle of contacts," says Pew's Lee Rainie. "This might make them hesitant to speak up either online or offline for fear of starting an argument, offending or even losing a friend."

Pair this with research that shows if you remove the "Anonymous" feature from your comments, you won't hear from most of your readers. There's something about tying your opinion to your name on a public forum that makes you think twice about them.

We'll wrap with a stomach-turning show of product commitment. To prove how much he believes in the power of the Bissell Symphony vacuum/steam cleaner, senior brand manager Ravi Dalchand vacuumed a small space on the floor of Toronto's busiest subway station and ate pasta off of it. To a parade of "ews," he even sopped the extra sauce up with bread! Talk about a show of commitment.