Every week brings us fresh social surprises. This week, we'll show you the latest offerings and campaigns from Twitter, Facebook, Pinterest, and Instagram; a gorgeous kickoff video for the launch of BBC music; and a bevy of tools to help you create social media images with ease. Skim to slide happily into the weekend!

God only knows how catchy this is. BBC Music launched with a cover of The Beach Boys' "God Only Knows," featuring a group it calls the "Impossible Orchestra": Everyone from Pharrell Williams to violinist Nicola Benedetti and Elton John are involved, not to mention the BBC's own concert orchestra. At just over 3 million views, it's rising fast in the viral video charts—likely because fans of each artist can't help but watch and share. Still, the pull you feel in your heartstrings is hard to resent: Far from feeling like a cheap celebrity shot, it's a proper romp into the fantasy world of music.

Because who doesn't miss Hogwarts? Author JK Rowling of the Harry Potter series started tweeting clues to an upcoming spin-off film, based on Fantastic Beasts and Where to Find Them, a textbook in Harry's magical world. The first clue was an anagram, often used in the Potter stories, and is shown below. The anagram's answer can be found here, along with a fuller description of Rowling's teaser tweets. How can you cultivate social engagement with creative play?

Share that photo for a scare. Halloween's around the corner, and movie ticket vendor Fandango's launched the Scare-Off (#FandangoScareContest), a contest inviting movie fans to Instagram re-enactments of scenes from horror flicks. The winner gets a walk-on role in an upcoming film by Blumhouse Productions, the fine people who gave us Paranormal Activity and Insidious. But to attract great content, you need great content: To drive participation, Fandango partnered with MovieClips to create videos like this supercut of cinematic screams (slide your volume knob down):

No PhotoShop skills? No problem. To maximize social engagement, it helps to use strong imagery. But not everyone's a graphic designer (or has funds to hire one), so Buffer put together [23 tools for creating social-media-ready pictures. Goodies include Canva (see below), a super-simple design program for those who lack PhotoShop savvy; Skitch , which lets you capture and annotate Web screenshots; and CloudApp, which lets you share images internally, take screenshots, and make GIFs. 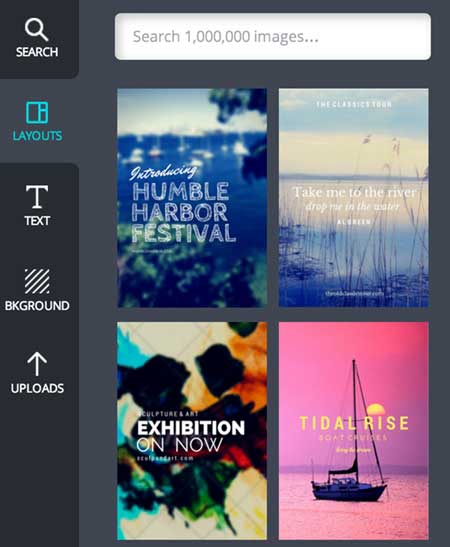 You don't need to follow to be interested. Mary C. Long explains Interest lists, a little-known (and little-used) feature on Facebook that lets people group public pages and brand pages into interest groups so they don't have to scroll through their News Feeds to see those updates. Though it's too much work for a brand to try convincing fans to add the brand to their Interest lists (assuming fans use them), it's handy for brands who need to keep an eye on inspiring public pages or publications... and to track competitors, since you don't have to follow them to add them to an Interest. To create Interest lists, look at the left side of your Timeline and scroll way, way down to "Interests." From there, create lists as you see fit.

Need some local love? Facebook's launched its Local Awareness Ads. Slated to launch in the US in the coming weeks, and globally in months to come, the service lets brick-and-mortar businesses target people based on how close they are physically. To make an ad, visit your Ads / Create section, hit "Local Awareness," and choose the Page of your business. You can then select your radius of ad coverage on a map. You'll then be asked to enter your ad text and image, as well as a call to action. Use Local Awareness to target people who live near you, or those just strolling through your 'hood. 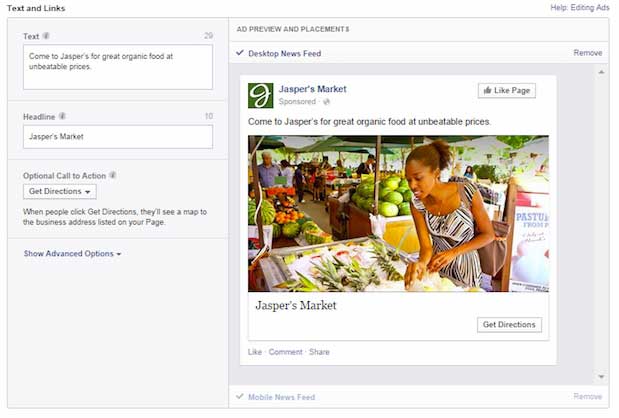 Trending on Facebook. Some iOS mobile users may have noticed that when they run a search on Facebook, a Trending module appears below search results. Think of it as Facebook's version of Twitter's Trending Topics. The feature's still in test mode, but its imminent rollout means you'll more easily keep your finger on that ever-changing pulse—especially if you want to jump on trends like the #IceBucketChallenge while they're still hot. 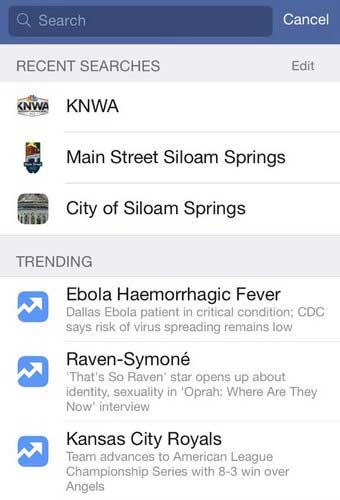 When John Doe will have to do. In deference to people seeking anonymity on the world's most popular social network (consider Ello and Snapchat), Facebook's quietly developing a standalone app that will let users interact without having to reveal real names. The hope is that the project—due to roll out in coming weeks—will empower people to discuss topics they don't feel comfortable talking about under public scrutiny. It isn't yet clear whether the app will interact with Facebook itself.

Say hello to ads on Snapchat! Soon, anyway. CEO Evan Spiegel says they're on the way, but "they aren't fancy. They aren't targeted"—so don't expect the rich granularity of targeting you enjoy on Facebook. Not to say Snapchat's audience isn't worth it: 50% of users are below 25. Ads will likely appear in the app's recently added "Stories" feature, which lets users (and brands) build "snaps" into a feed that can be viewed multiple times in 24 hours.

Not to be confused with a pinprick. Pinterest launched "Pin Picks," a set of curated collections meant to drive users directly to subjects and current events: Fashion Week, home hacks, and pre-gaming, for example. The collections will be updated weekly; they are created with content partners, whose pins, of course, are featured. This offering presents interesting opportunities for marketers to get their Pins to a wider audience if they're relevant to a given topic—meaning more motivation to Pin. You can also use them to glean inspiration for how to organize your own Boards for freshness and topicality.

Speaking of Pinterest, WhoIsHostingThis made an infographic to help you double Pinterest followers in just five minutes a day. In addition to handy tips (avoid commenting at random! Pick a specialty), it also provides stats about why Pinterest is of interest (one Pin generates an average of $0.78 in e-commerce sales). 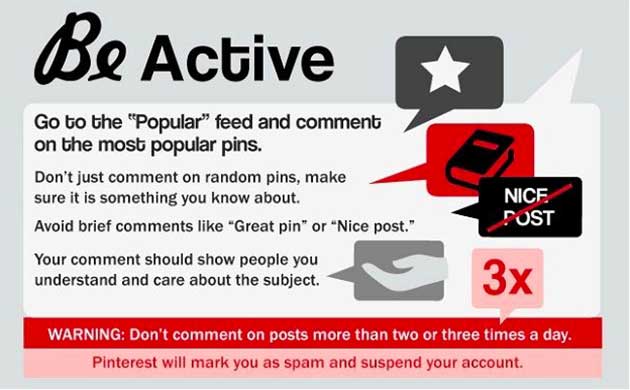 Mirror mirror on the wall, who's the best socnet of all? For teens, it's Instagram: 76% use it now, up from 69% in the springtime, per a Piper Jaffray study that also found only 45% of teens say they use Facebook, a huge drop from 72% in the spring. Behind Instagram, Twitter is used by 59% of teens—a drop from 63% just a few months ago, but still a higher rate of use than Facebook. Pinterest and Tumblr trail behind at 22% and 21%, respectively. 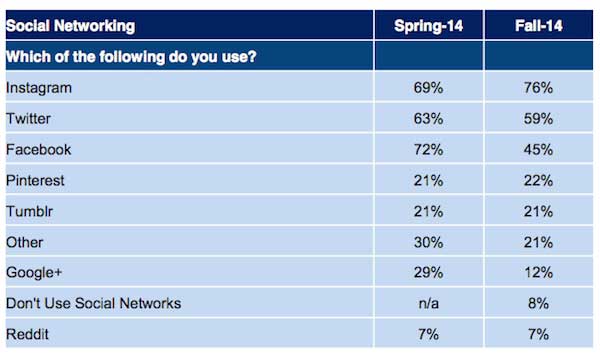 Want the youths? Be positive. Facebook published a Crowd DNA study to teach us how to reach younger users (age 13-24). Among the findings: 58% of young people are optimistic, with 13-15-year-olds expressing the most positivity (64%). They rank happiness as more important than other ambitions, including financial independence, loving families, or the discovery of their own interests and skills... which we always thought influenced happiness, but that's just our age talking. Despite that, 73% say their lives revolve around friends and family, especially on social networks.

Couple that knowledge with a Havas study, Hashtag Nation, which finds that young people are more receptive to brand adoption. "If you can create a friendship with these consumers, you really take it to the next level. They will go to great lengths to support you," the study reads. The brands teens choose make a statement about their lives—but they also have an "innate understanding" of marketing and their value as consumers, so don't underestimate them. The article wraps with tips on how to attract the "dream demo."

How well does Twitter engage? ExactTarget found out. Engagement rates on Twitter vary by Tweets and industry, but media and entertainment brands get the lion's share of average replies (7.7) and retweets (23.8) for the whopping 199,000 tweets the industry published out the 3 million tweets in the study sample. Compare that with travel and hospitality, which accounted for 287,000 tweets but scored low in average replies (1.8) and average retweets (5.6). The infographic also provides engagement rates for photo versus text tweets. 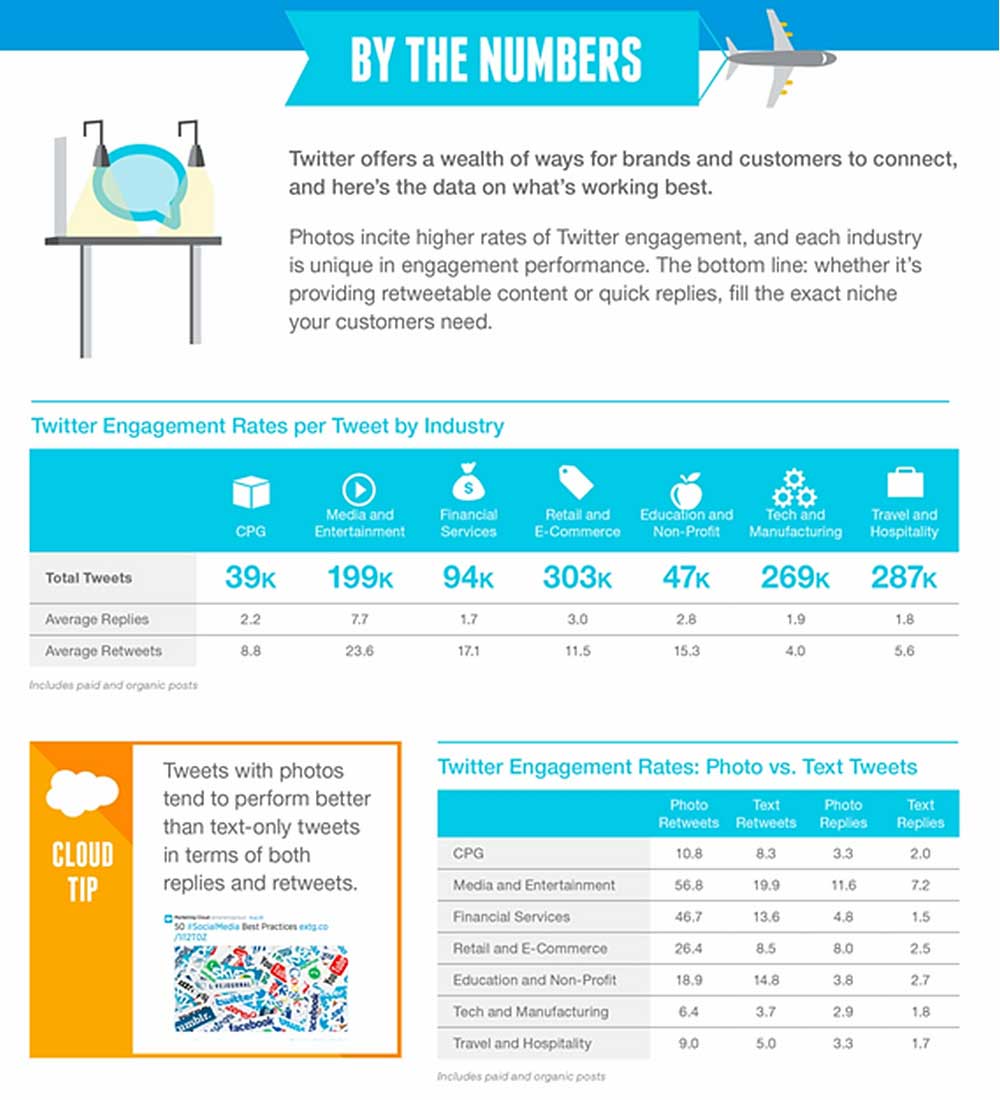 We'll wrap with some musical nostalgia. This week, to the dismay of Millennials and Gen-Xers everywhere, Buzzfeed reported that last weekend marked the death of Saturday Morning Cartoons—the first time in over 50 years that none were broadcast. The reasons for their demise are many, but a swift final blow to cartoons can be traced to technology such as cable, streaming, and DVDs. Today your kids' most memorable early entertainment experiences will likely be on-demand or iPad-based. (Also worth noting: Brand budgets are also following this trend from TV to online.)

To honor an era past, below is a video of the Carnegie Hall orchestra playing theme songs from 43 cartoons. Can you guess which ones they are?