Learn about Facebook's plans to elevate Amber Alerts and colonize your work life, Twitter's newest ad strategy, and brands that are using the latest (and weirdest) slang. Skim to get on fleek.

Today in unexpected winning business models... Last week, Mathew Carpenter launched ShipYourEnemiesGlitter.com, a site that for $9.99 in Australian dollars sends an envelope of glitter to people you hate. It's simple and straightforward: Passive-aggressive revenge that's more funny than harmful, the perfect response to everyday petty grievances. The site exploded on Reddit and spread to other Millennial-targeted publications like The Daily Dot. Within 24 hours, it was overwhelmed with orders, prompting Carpenter to beg the Internet to stop buying. A typical response to his plea: "You have made your glitter-coated bed and I'm afraid you will have to lie in it."

Why we loved it? Ship Your Enemies Glitter is tongue-in-cheek, easy to understand, and more deprecating than salesy (the polar opposite of headlines like these). Like Cards Against Humanity, its language was catnip to users whose purchases aren't always aspirational; they express a skeptical humor toward consumerism. Carpenter's quick rise to fame, and consequent regret, also make a great story to follow.

We've come far from the simple days of #yolo. Now here's a lesson in how not to win your brave new world of youthful critics. Shareen Pathak highlights how brands adopt teen slang to make themselves more relatable. It is weird. A quick primer: "Bae" (already an overused hashtag) refers to a real or potential girlfriend or boyfriend, but can also be used to refer to something cool. "Fleek" is a way of saying something is on point. Now you know. Brandwatch reports nearly 17,000 mentions of brands' and consumers' using "bae" or "fleek" online, with #bae co-opted by the likes of Taco Bell, Burger King, and Applebee's (someone's even made a Twitter account of brands saying bae). 360i's Shankar Gupta has a good rule of thumb: "If a teenager would hate setting foot inside your offices, your brand probably shouldn't use the word bae." (Or fleek.) We know it's harder now to win attention, but you won't do it by sounding like their overeager "cool" uncle.

Google Search now features brands' social profiles. Now when you Google a brand, you'll see links to its social profiles on the right-hand side of the search results—drawing more potential traffic to your social network pages. Recent posts on Google+ will also appear below the social network links on both desktop and mobile. Start sprucing up your brand pages... and don't forget to post something on G+ every once in awhile! 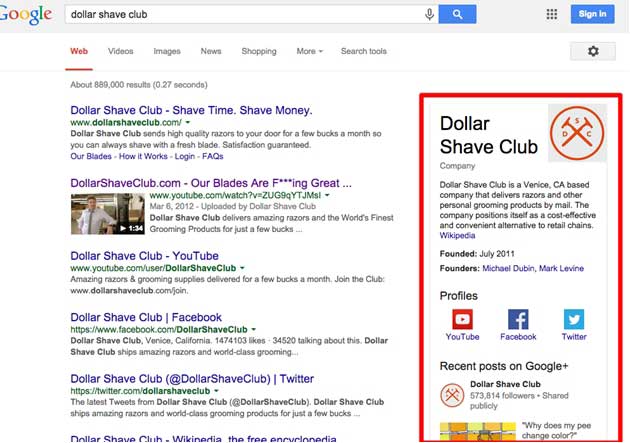 Your punishment for wasting time at work. Facebook's finally launched Facebook at Work, so if you're on Facebook all day anyway, you can have your cake and eat it too (but it's gonna taste like fiber). Now available on iOS, Android, and desktops, Facebook at Work lets businesses create internal social networks for employees. Either create separate employee logins, or link the page with people's existing accounts so they can access it easily. Companies with 100 or more employees will be targeted first (smaller ones often already use Facebook Groups for similar purposes). It isn't clear how or whether the app will be priced, or whether third-party apps will be allowed later, but this does herald Facebook's entry into the enterprise social network space, where it's got a huge head start on brands like Yammer: Your employees are already on Facebook all day long. 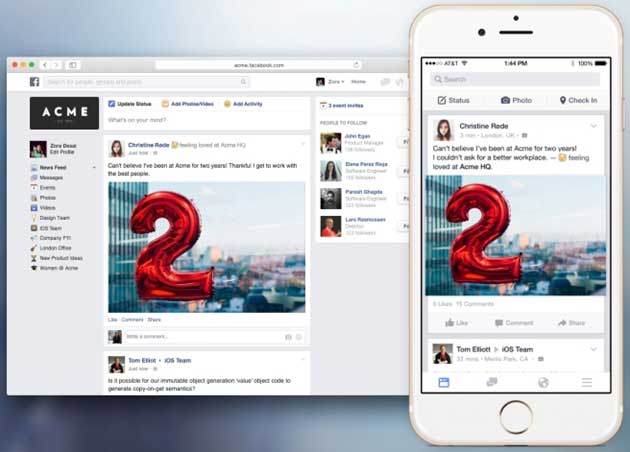 Now in your News Feed: Amber Alerts! The National Center for Missing and Exploited Children can now issue Amber Alerts via Facebook, which will spread the notice on the feeds of people in the area, including a photo of the child and the possible abduction location. The post will appear with an "Active AMBER Alert" mention and will be shareable. Facebook is the first social media site to partner directly with the organization, which also works with Google and Bing. If you have information that can help find a missing child, users are asked to call 911. Notably, Facebook recently also added warnings over graphic content that can potentially "shock, offend and upset." 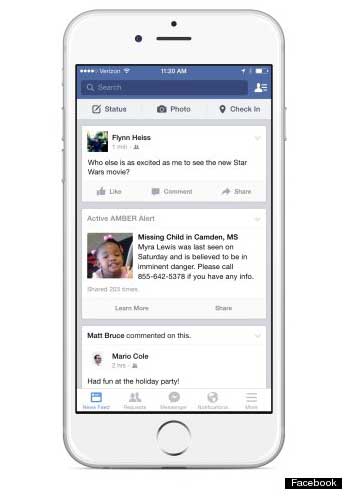 Most questions posted on Facebook go unanswered. A Quintly report finds that 45.4% of questions left on brand pages that have over 91,000 Likes get answered, which means over 50% don't get addressed. The rate of response rose from 37.4% in January 2013 and 42.4% in the first half of last year. Engaging in social networks implies you are open to feedback and receptive to concerns; ensuring a high response rate shows you honor that understanding and is the best way to keep sentiment high. Speaking of, the airline industry boasts the best overall response rate of any industry, clocking in at 76.4% of questions answered in Q4 2013, per Social Bakers.

Logging out won't protect you from Twitter ads. Twitter's announced a number of new features, including an autoplay video ad product and an ad model for "logged-out users," where ads piggy-back on tweets that appear on other publishers' apps and websites. The revenue will be split between itself and publishers. In addition to extending the reach of its ad arm to media pubs, users who log out of Twitter will also see advertising. Here's to more eyeballs!

What's the price of a disappearing ad? Snapchat, which topped 100 million monthly users, is asking brands for a minimum commitment of $750,000 a day for its disappearing video ads. The pricepoint was solicited to category leaders, who are told a Snapchat Story can attract tens of millions of viewers a day. The minimum investment is more expensive than a YouTube masthead, which costs about $500,000. Still, repeat advertisers like Universal and McDonald's appear happy; NBC Universal and Electronic Arts claim the format won them a receptivity rate three times higher than normal for their feature film Dumb and Dumber To.

The 10 most-loved social media brands. Hootsuite's published its latest Love List, a ranking of over 450 of the world's most valuable brands, categorized by social love. Food and beverage dominated the top 10, with Starbucks at No. 1 (Chanel, Friskies, and Urban Outfitters follow, which presents an interesting user picture: Cappuccino-sipping fashion lovers with cats?). Holiday promotions and products affected rankings (think Pumpkin Spice Latte), as well as being able to straddle the line between being both aspirational and accessible (like the friendly cool girl at school). 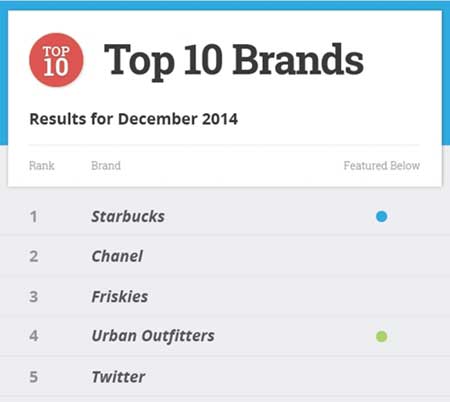 A new social index for big brands. If you like stalking big brands' Twitter stats, the brand-new SocialRank Index will now let you do it regularly. The Index tracks Twitter stats for global brands, including follower figures, level of engagement, and rankings of "best" followers (based on follower value and engagement level). Co-founder Alex Taub calls it "Moneyball for brands." Later, users will be able to create their own lists, making it easier to follow brands you want to be like, as well as competitors. 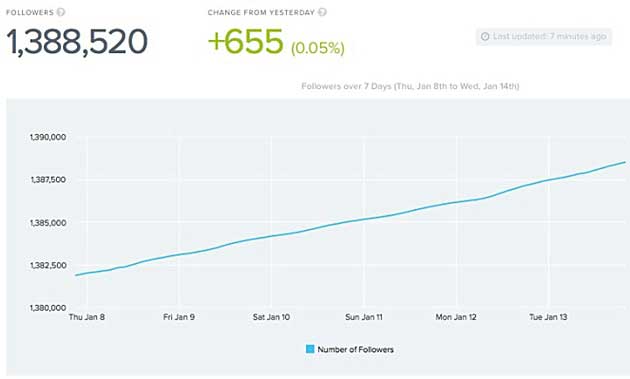 Dailymotion: Going for gaming gold. Dailymotion's launched a livestreaming platform for gaming. Dailymotion Games lets users launch live-streamed gaming broadcasts and manage them via its control panel. They can also monetize their videos or e-sports competition streams with video ads that they control. This puts Dailymotion in competition with super-popular gaming hubs like Twitch, which itself just launched a free music library for video game streamers (because a pro-gamer video is always better with background music). 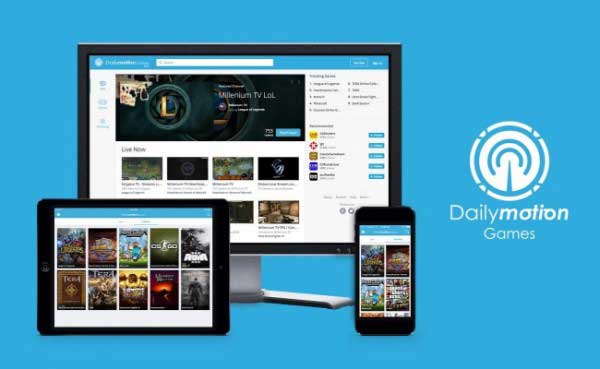 Vimeo and Maker Studios partner up. Maker Studios, purchased by Disney last year, represents Millennial-friendly online video stars like Pewdiepie and Epic Rap Battles of History. It's inked a distribution deal to produce exclusive content for Vimeo's On Demand platform—a blow to YouTube, where Maker Studio celebs built their followings in the first place. This marks another step in transforming Vimeo into a premium programming hub: The more users come ready to pay for quality content, the better it is for content creators who get in on the ground floor.

We'll wrap with some ad-laced emojis. Emojis have changed the way we text and chat online. You might recognize a few: The smiling poop-shaped emoji, or the see-no-evil monkey. They've become so prevalent that brands have begun to hijack them. Naturally, Scott Wolf, Jordan Miller, and Johnny Michael have banded together to create Admojis, which takes popular existing emojis and pairs them with statements that reflect working life in ad land. You'll never look at that little alien head the same way again. 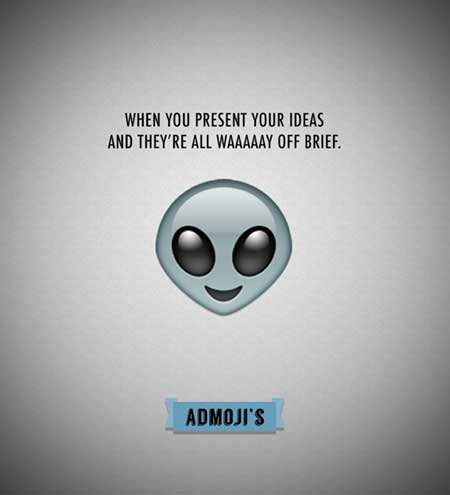