#SocialSkim: Mary Meeker's State of the Internet, Plus 11 More Stories in This Week's Roundup

Get a sense of the scope of Mary Meeker's much-anticipated yearly State of the Internet. Learn how improved Twitter Analytics will help you better target buyers. We'll also share which social networks are most effective for marketing, and we'll surprise you with music that can be listened to only in the woods. Skim for the latest!

Big takeaways: Internet user growth has begun to slow. It grew 8% in 2014, versus 10% the year before. Smartphone adoption is also slowing: 23% growth last year versus 27% the year prior. Video made up 64% of Internet traffic and 55% of mobile traffic in '14, which is huge—and Facebook specifically enjoys 4 billion video views per day.

Mobile viewing on its own accounts for 29% of our total time spent on screens this year, and Meeker predicts that messaging apps, like WhatsApp, Snapchat, and Facebook Messenger, will transform into global communication hubs. Read the full deck:

It will also help you identify new and relevant audiences for campaign targeting. Insights include demographics, interests, purchasing behavior, trends they like, and even their TV viewing behavior. 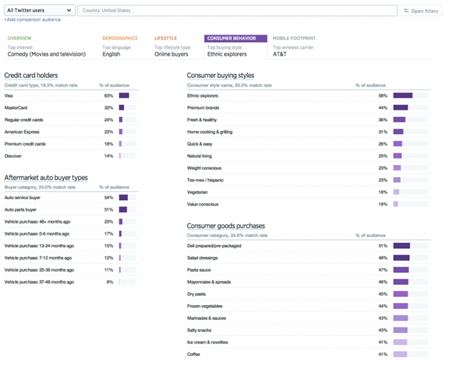 Here's some creative inspiration. MedExpress wanted to get people thinking about it whenever they have a virus, so it decided to declare war on anything that could go viral—including viral videos.

The company purchased a bunch of unskippable pre-roll ads that pop up whenever you're trying to watch content that is currently going viral. To stop the virality, an awkward medic proceeds to do the most annoying things he can think of. (Think terrible accordion- and harmonica-playing.)

How can you take advantage of online norms (like the "Skip Ad" feature) to create content that captivates?

3. Which socnets are most effective for marketing a business?

Half of marketers call Facebook the most important social network for growing and marketing their businesses (using the metrics of increased exposure and higher traffic), a cording to Social Media Examiner's 2015 industry report. (Of those surveyed, 61% were B2C; 39% were B2B.)

Some 21% of respondents called LinkedIn the most important socnet for them (although it was the top one among B2B marketers, at 41%); Twitter scored a distant third (12%), followed by—surprise—YouTube and Google, both at 4%.

If you look at use, however, figures vary: Facebook is the most-used network for marketers at 93%, Twitter comes in second (73%), and LinkedIn comes in third (71%). Guess we won't be quitting the 'Book anytime soon. 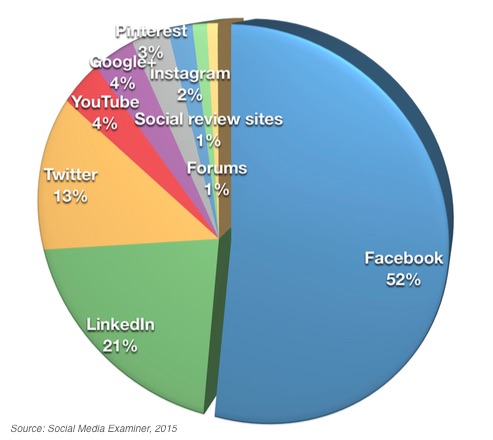 Marketing's one kind of animal, sales is another. A Forbes sales survey found that salespeople consider Twitter more valuable than LinkedIn for prospecting! Several pros weighed in on why.

Vanessa DiMauro of Leader Networks called Twitter "the bar after work," where relationships truly begin, whereas LinkedIn is more like a conference room. And John Barrows of Sales from the Streets called Twitter a powerful search engine, citing the ease of searching by hashtags to find out what people discuss most. He also said it's easier to connect with people on Twitter—you can follow them without permission, whereas to see LinkedIn updates, people must validate your connection.

So, for research and engagement, Twitter: 1; LinkedIn: 0. (At least for salesfolk.) 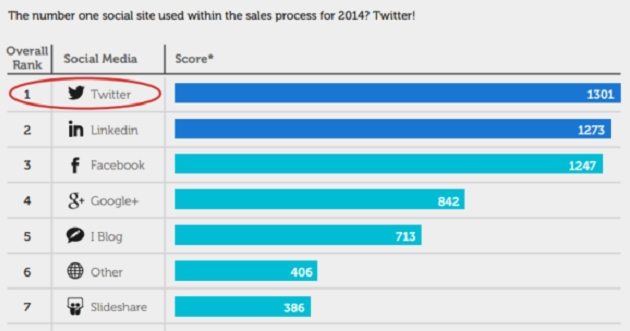 You'd think that with video exploding, YouTube would be king right now—but that's not the case.

Per AdAge, Google announced this month that YouTube video ads have a 91% chance of being seen—but it won't let advertisers use third-party viewability companies to check that figure, so means big brands like Kellogg are pulling their budgets.

Many are concerned that despite big investments and charming promises, their ads aren't actually being seen. And if the numbers are as good as Google claims, they say, there shouldn't be an issue with permitting brands to hire independent companies to check viewability numbers and compare rates on their own.

We'll see whether big publishers let up. If they want to follow the money, they'll have to.

6. Facebook updates Messenger payments and extends them to NYC

In March, Facebook launched the ability to send money to others via Messenger. The option's now been extended to New York, and usability's also improved: In Messenger conversations, dollar amounts are hyperlinked automatically. When the link is tapped, Messenger will start the process of transferring payment to the person you're messaging. Senders must confirm the payment before sending.

This feature is especially handy for party planning, for one, where a group of people in Messenger can quickly pay one person to buy a gift without having to leave their chat. They'll also be able to see who paid whom, and how much. 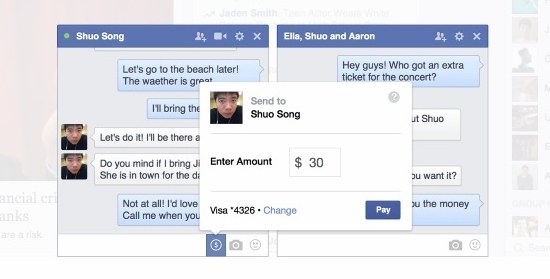 This is just one more simple and intuitive effort to incorporate higher-quality, value-adding content to the socnet that consumes most of our online time anyway.

The reviews will appear as short summaries and are optimized for mobile. When clicked on, they'll drive people to the full reviews on publishers' sites. All the way from here, we can feel Yelp trembling. 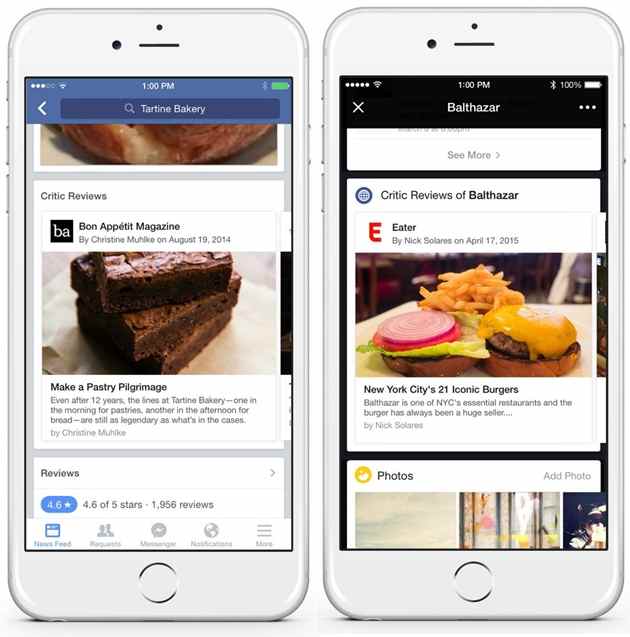 A Maximillion infographic provides tips and stats for using social media to power up your events. Advice includes creating a visual countdown: "share photos, infographics, or any other kind of interesting imagery to gently remind your audience about upcoming events."

And one piece of low-hanging fruit: "Invite a social media celebrity" with a big following to speak at your event. The fans that follow him or her will likely also boost event discussion on social. There's more where that came from. 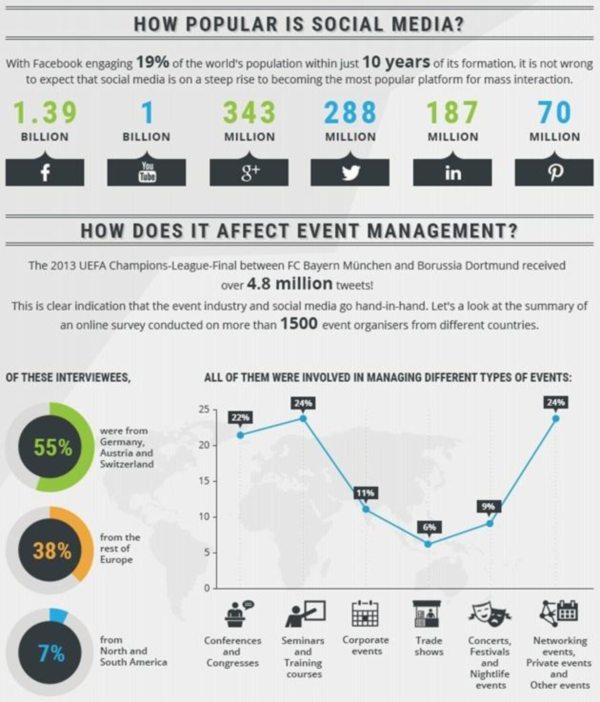 As part of its ongoing effort to be more than just a pretty sext, ephemeral content platform Snapchat's hired Marcus Wiley as Head of Program Planning and Development. He'll be running Snap Channel, an original programming vertical on Snapchat's Discover section.

Part of his job will lie in building short-form narrative series in scripted, musical,and experimental formats, made to appeal to users age 13-34. That's a big margin, but it also means brands will be expected to come with higher production values and richer storytelling if they want to compete or make a mark on this coveted group.

Per Snapchat, users currently watch 2 billion videos a day on its app. 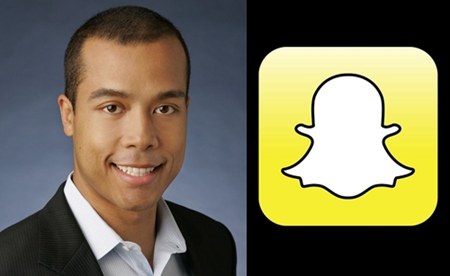 Too few people, which should surprise... just as many. A Scoopshot report finds that over 30% of people surveyed never read the Terms of Service agreement when they join a socnet; 50% read them "sometimes"; and 18% "always" do.

Of those who do read the agreements, their top concern (43%) is how companies will use the content after they've uploaded it; 27% read them because "you always should"; and 24% read them because they want to protect their personal info.

As for trust: Facebook is trusted least of all in terms of how people perceive it as protecting their digital rights; Foap was trusted most.

11. We'll wrap with a sensory surprise

If you thought it was cool how Beyoncé dropped an album last year using just Instagram and word-of-mouth, you'll perhaps be more impressed by John Moose, a lesser-known group that needed to generate buzz about its debut album.

The Swedish band feels its music is best appreciated when listeners are surrounded by nature… so it created an app that would let people listen to all the tracks before the album was released. The catch? The app is outfitted with GPS technology—and the music will play only when you're in the forest.

We love it for taking advantage of longtime technology in a new way... and cultivating a rich, multisensory and compulsively shareable experience for fans.

For a sense of what kind of music John Moose makes, listen to Flower.