Find out how Facebook's latest ad product will fuel the growth of its next billion users (it hopes). We also tell you about Pinterest Shop, the anatomy of the perfect Instagram ad, and how Insta plans to take on Snapchat with its own take on Live Stories. Skim to stay in step!

What's the next move for a company that calls 1.5 billion online users customers? Find a billion more. The catch? They're all in emerging markets and stuck with slow 2G mobile network connections.

To target them, Facebook's new ad unit, Slideshow, lets advertisers stitch together images that emulate video ads but require far less bandwidth and mobile network power. Coca-Cola, Netflix, and Brazilian cosmetics brand O Boticário are already on board. And it looks like users in emerging markets are receptive to video ads. 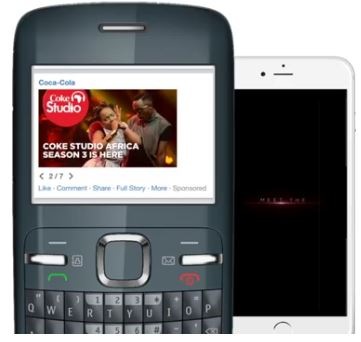 And its concurrently launched Pinterest Shop is a landing page featuring "trend reports" of Buyable Pins that are trending among users, divided by category and shown below. Note that it looks a lot like a retail site, nicely optimized for mobile devices. 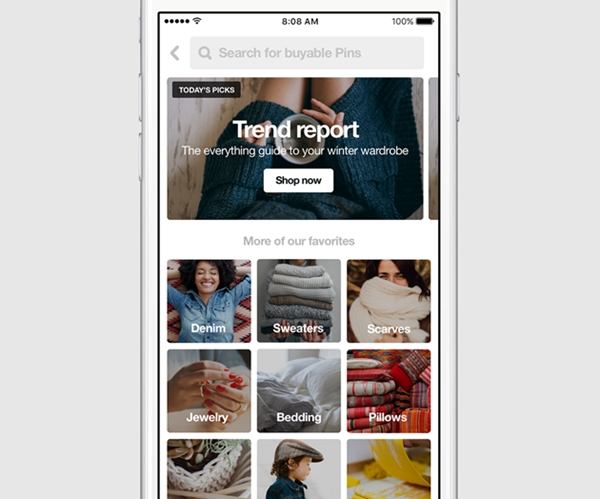 2. Instagram built its own version of Snapchat Live Stories

Slowly encroaching on Snapchat—and Twitter—territory this week, Instagram spooked competitors on Halloween with curated content streams: American users logged in on Hallow's Eve and were invited to "Watch Halloween," a video-only stream assembled by Instagram employees.

The takeaway: Instagram has yet to perfect its ad model, but this opens new doors for event-based advertising and brand sponsorship. And in case you didn't get enough ghoulishness last weekend, here are 10 highlights from Instagram's Halloween collection. 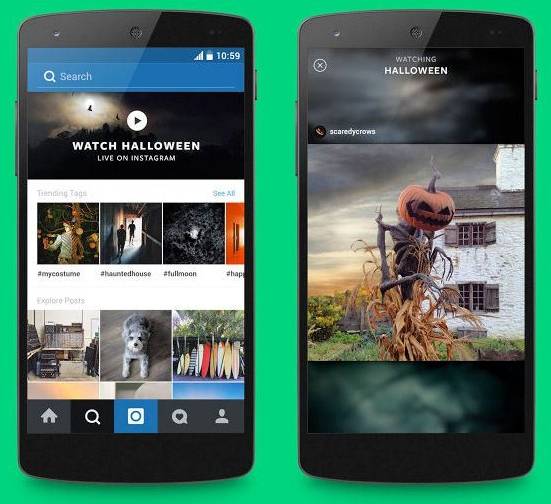 A few tricks can help maximize your ad potential. This infographic breaks down available ad formats, conversion types, useful stats (44% of Insta users are researching products!), and free tools like Layout, Boomerang, VSCO Cam, and Bannersnack—the proper use of which can really add production glam. 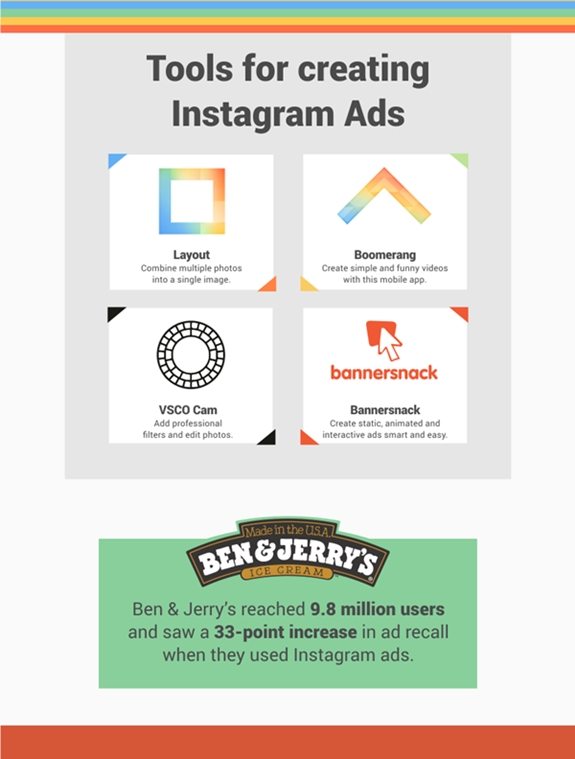 4. Like VSCO? Meet DSCO, its iOS app for GIF creation

Leaping into the GIF-maker craze, image editor and Instagram competitor VSCO introduced its first-ever standalone iOS app, DSCO, which you can use to make artsy GIFs at the drop of a hat. If you're an iOS owner who still hasn't found the right GIF-maker, this might just be the one.

5. Where are Millennials most likely to use social media

You can probably guess: At work, per a CompTIA survey. But they aren't goofing off: If those in their 20s and 30s use social media most at work, it's because three in 10 are using it for work. Just 20% of Baby Boomers use Facebook for work; 25% don't use Facebook at all, not even at home.

And here's a stat that'll surprise you: Across all age groups, 64% of workers feel social media negatively affects productivity, and face-to-face collaboration is still important.

The solution isn't banning social but making sure it's used strategically and productively... as well as leaving room for trying new things, says CompTIA's Seth Robinson.

Some things, though, don't change. Here's what young people spend most of their money on:

6. Snapchat reserves right to keep and use... selfies?!

Uproar occurred in the Snaposphere when Snapchat rewrote its TOS to assert its right to store users' snaps and data for later use and potential sale... without compensation. This is a big deal: In 2013, it claimed it deleted users' data upon the opening of a snap.

Amid the current hullabaloo, Snapchat clarified: It's not planning to use your moment's-notice duckface in ads, but it added language to its TOS to accommodate services like paid Replays—which, to be frank, is still kinda like selling your face without compensating you.

Snapchat wasn't the only social platform thrown into controversy this week: Twitter quietly replaced its time-tested, star-shaped "favorite" icon with what it considers a more easily understood, rewarding symbol: A heart, which you'll recognize if you ever Liked anything on Tumblr or Instagram. The hope was to make Twitter feel more accessible to potential users—and a heart is more universally understood across platforms than a star.

Maybe every little bit helps, but people got stuck on semantics: The star was distinctive and made Twitter special, some say; and the symbol also changes the concept of a "favorite" to a more basic, nearly meaningless "like." Something sparkly got lost in translation.

You can say a lot with a heart. Introducing a new way to show how you feel on Twitter: https://t.co/WKBEmORXNW pic.twitter.com/G4ZGe0rDTP

8. LinkedIn beats earnings and expands its (and your) opportunities in China

LinkedIn surpassed analysts' revenue expectations, with ad revenue rising 28% over last year, and user growth of 20%. Its Chinese base also exploded: It now exceeds 13 million. LinkedIn also mentioned that 55% of its traffic came from mobile, which should come as no surprise, because we know all your social efforts are already mobile-friendly... right?!

Lauren Donovan, the community manager for Search Engine Land and Marketing Land, says no, and it's worth reading why. Among other issues, Groups now don't require validation from managers for a conversation to be posted on their forums—which strips CMs of their ability to ensure the quality of a discussion.

Groups are also now private, which means LinkedIn assumes that because managers are vetting all members, they should be able to trust their posted content. The truth is, it negatively affects group growth while foregoing quality: "I don't have the time or resources to do background checks on everyone or investigate their behavior in every other LinkedIn Group of which they're a member," Donovan writes.

Confirming her views, community manager Megan Singley of Moz announced plans to close her LinkedIn Group—30,000 members strong—for the same reasons. It merits watching to see whether LinkedIn reverses these changes to accommodate B2B community managers who've incorporated Groups into their strategy, or leaves them in place to watch Groups wither for its biggest market.

10. We'll wrap with some compelling sociology

Everyone knows people work to make their lives look more enviable on social networks, but the depth of that truth was probably never more obvious than this week. Australian model Essena O'Neill, who accrued a huge following with more than her fair share of bikini photos and gorgeous meals, decided to opt out and reveal the truth behind her photos.

Insisting on her new site, Let's Be Game Changers, that celebrity social media culture is "fake" and almost entirely staged, she adds that social's way of judging success—Likes and Dislikes, views, follower numbers—amount to "perfectly orchestrated judgment." To prove it, she deleted thousands of Instagram images and recaptioned old photos to explain what was really happening behind the scenes. (Her Instagram account has since been deleted.)

We believe in social media's ability to bring communities together and empower businesses, but O'Neill's point is powerful: It's easy to get caught up in the sum total of Likes and Followers without considering the quality of engagements and fans you're attracting, or considering what aspects of your brand helps enrich people, not just amuse them. As in all things, social succeeds when used thoughtfully—and not just in the interest of #winning a visibility contest. 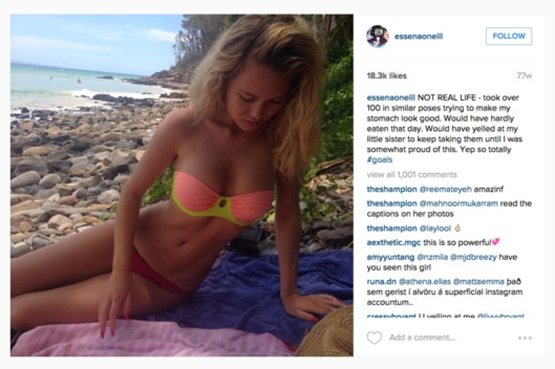