Read closely, because this week's 'Skim spells out the future of social. Twitter threw the most recent punch in social's quest to conquer sports and livestreaming, and WhatsApp finalized encryption that makes Apple vs. the FBI seem like peanuts.

We'll also dive into Kik Messenger's new bot store, discuss how Slack could be the platform that finally brings social to your office, and let you in on the perfect post lengths to drive the most engagement on different social channels. Skim to set yourself up for success!

The latest on social's desire to conquer sports broadcasting? Twitter walked away with a big "W" this week after the National Football League announced it would livestream 10 Thursday night games on the platform. The roughly $10 million deal comes as Twitter marches downfield to boost its stagnant user growth, and as the NFL aims to increase its reach and revenue via international business and livestreaming.

Facebook benched itself during negotiations because of a disagreement over monetization models: The NFL wanted to keep ads in, and the social network preferred an ad-free model.

NBC and CBS recently bought rights to broadcast the same games on your TV, so the Twitter agreement means the social network will be displaying the TV networks' ads. It's big news in the social sports world, and a likely indication of what's coming to the platforms in the future.

This fall Thursday Night Football will be streamed live @twitter so fans will see more of this. https://t.co/s6tbr9FjvY

1. WhatsApp just finished encrypting the conversations of a billion people!

Forget Apple vs. the FBI. The Facebook-owned messaging app just completed end-to-end encryption of its users' communications across all of its mobile platforms—text messages, voice calls, voice notes, videos, photos, and attachments included.

Advocates are calling it a great day for privacy rights; critics are saying it puts the public in danger, pointing to the likelihood that the app's encryption was used by terrorists to coordinate the November 2015 attacks in Paris.

The level of encryption put in place by WhatsApp means even the company's employees can't decipher the content of messages, likely making it impossible for the app to comply with government warrants even if it wanted to. We see some court challenges in our crystal ball.

A week ahead of Facebook's anticipated reveal of its own bot shop for Messenger, competing platform Kik launched a store featuring 16 new bots with partners including Funny or Die, The Weather Channel, and Sephora. As we said recently, the 275 million user-strong messaging app also thinks bots represent a great shift in tech, and also a big new distribution channel for brands to (carefully) tip-toe into.

The goal of Kik's new store is to give users quick and easy ways to do things such as access information, set reminders, find funny GIFs, and get makeup tips; but the company is inviting developers to build their own bots to diversify the offering and utility for users.

Kik may have beat bigger fish like Facebook to the launch, but the usefulness of its chat bots will determine whether it can help the platform grow. Stay tuned!

3. B2B consumers love Instagram, so here's how to get the most from it

A recent TrackMaven report finds that although B2B brands can consider LinkedIn the key source for followers, Instagram actually leads the pack in social engagement.

Many B2B-ers think their products are too boring to result in great Instagram moments, but posts from brands like Cisco and Oracle reveal top-notch ways to engage a community on Insta. From taking a "Geek Chic" approach and showing off your brand in an educational way, to relating your company to current events and showing off the fun-side of your company with after-hours posts, the possibilities—and filter combinations—are endless...

"With you May the Fourth be! Shared our favorite, have we." Happy #StarWarsDay!

4. Facebook wants to make Live the sports broadcaster of the future

Twitter isn't the only one prioritizing sports in social. Facebook launched a dedicated feature called Sports Stadium in January to help fans interact on the network.

Despite the loss of NFL streaming to Twitter, it appears Zuckerberg won't be stopping there. The platform's jump into livestreaming has proved promising for broadcasters like ESPN, which have turned to Facebook to take advantage of the fact that Live videos on the network retain viewers on average three times longer than pre-recorded ones.

Brands are mostly using Live to supplement their existing TV broadcasts with behind-the-scenes reporting and previews, but offerings will likely evolve as the format ages and companies get a better grasp on what makes users engage.

Sports may have a particularly rabid fan base, but as Facebook continues to prioritize its new product, it's time think of ways your brand can use Live.

comScore, a leading cross-platform audience measurement company and reference for advertisers worldwide, could soon let Snapchat Discover partners connect to their service—allowing the publishers to measure audiences and include Snapchat performance numbers in their overall pitches to advertisers.

Snapchat has been searching endlessly for ways to measure the engagement and reach of its service, most recently revealing its plans to use Nielsen to track ad performance. The comScore move would give advertisers an even better understanding of traffic, and could also legitimize the publisher's investment in the platform.

6. The day of never needing to leave your messaging app draws nearer

Facebook and Dutch KLM airlines introduced a way for travelers to receive all flight-related info via Messenger: The airline will send itineraries, boarding passes, check-in reminders, and flight status updates directly in the app. Perhaps even more handily, consumers can now chat with customer service!

We've talked about the future of chat apps before—that everything users will need (from customer service to transportation and payments) will be found within their messaging app. Keep an eye out for how this space develops, as brands will play a big role!

Receive your booking details via Messenger

Use Messenger to get on board. All your travel info in one place.

7. Slack's numbers indicate it could become the king of social in the workplace

The Cloud-based work collaboration platform just announced $200 million in new funding at a $3.8 billion valuation, giving the startup mounds of cash to fund acquisitions and develop new products. What's more, each of Slack's 2.7 million daily users (up 3.5 times from this time last year) spends an average of 10 hours per weekday plugged into the platform!

Social collaboration tools are likely the future of the office, with platforms like Slack making headway in businesses such as NASA, LinkedIn, and Spotify as they endeavor to kill emails and make communication simpler. Does ysour company use Slack? Let us know your thoughts below! 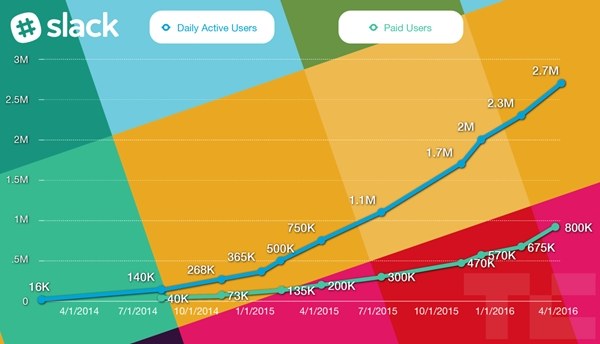 8. Mobile now accounts for nearly 80% of all social media traffic

comScore's 2016 US Cross-Platform Future in Focus study is chock-full of insightful tidbits—the most interesting of which are all about social. We encourage a read-through of the report, but we've wrapped up the key takeaways here, but only because we like you… 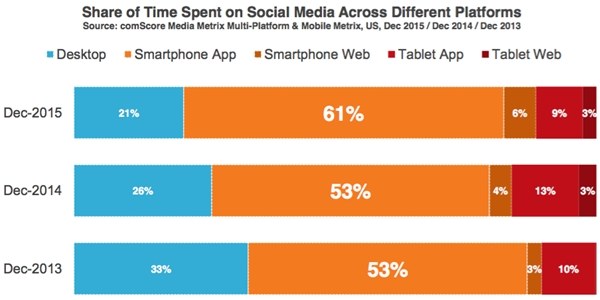 9. Why you should consider image recognition to strengthen your social strategy

We're all about influencer marketing, but how exactly can brands go about finding influencers relevant in their community? Image recognition could help. The tech lets brands peek behind the curtain of otherwise untraceable mentions to see how people are sharing and interacting with images of their brand on social.

Today's age of user-generated content means such a capability can be helpful in uncovering deeper brand image insights, as well as tracking misuse of logos, or tracking ROI of events and sponsorships.

Sure, most of us don't have the brand love Starbucks does, but sometimes our industry's equivalent of One Direction or Elon Musk (below) might send a photo of our product into the twittersphere—and it's best to know when that happens.

10. How much is too much? Here's the perfect number of words for your social posts

Stuffing as much text as possible into a post isn't always the right idea, and our friends at Express Writers have a cheat sheet infographic that details the ins-and-outs of optimal copy length for social posts and (bonus!) blogs. 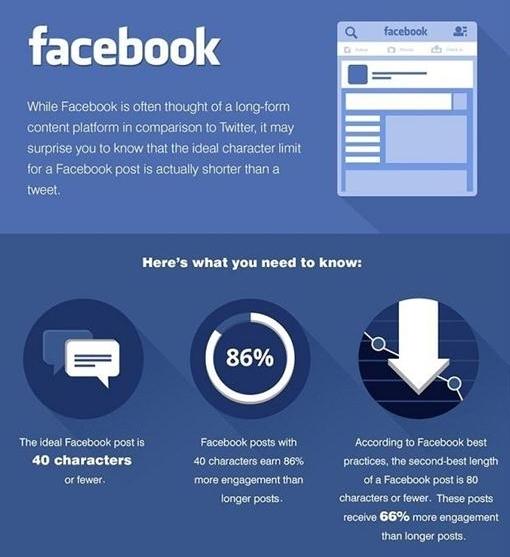 11. Three analytics tools to help you take charge of your Instagram success

We wouldn't have written about the importance of Instagram for B2B without providing ways to measure your performance! With Insta's new algorithm, it's time for brands to take a serious look at their performance on the platform in order to provide valuable content that keeps them at the top of feeds.

Simply Measured, Iconosquare, and Sprout Social are three tools for getting started, all of which offer either free trials or some free reports to make sure they work for your business. With the power and might of Facebook behind Instagram, it's more important than ever to figure out how to develop high-performing content that resonates with users. These tools should help!

12. Brands fooled around on April 1, and we were watching

Let's talk about April 1. Hulu made a dating app, Gmail ruined a lot of people's emails, Hamburger Helper dropped a mixtape, and Expedia Canada launched an airline exclusively for gingers. Like other years, brands reached far and wide to connect with consumers on April Fools' Day, with some big names missing the mark completely, and others enjoying rave reviews.

Some feel companies should do away with the holiday completely, but we still think it can lead to genuine moments of humor and serve as a way to show off the personality of your otherwise "professional to a T" company. We've included our favorite prank below!

Photos have been an integral part of Facebook since 2005, and it's nearly impossible to imagine the platform without them. But for millions of blind and visually impaired users, the Facebook experience isn't quite the same. That began to change this week when Facebook's accessibility team launched a new feature it calls "automatic alternative text"—a technology that uses machine learning and voiceover technology to describe the elements of photos aloud to users.

The product is still in its early stages, but it can reliably identify concepts in categories, such as transportation, food, people, and nature. The company is also developing ways for AI to identify content within a video and to let users ask questions about photo contents to receive responses.

It might seem like a minor step in a long road toward making the Facebook experience available to all, but it's a praiseworthy one that we think deserves attention and accolades. Check it out: