#SocialSkim: All You Need to Know About Facebook's F8, Plus 13 More Stories in This Week's Roundup

Let's talk Facebook. Because that's what this week was all about, as the social giant held its annual F8 conference where we learn about all the shiny new things the company is working on. This week's 'Skim is a Zuckerberg extravaganza, so we'll jump into the company's big announcements, what they mean for brands, and how other platforms are reacting.

We'll also discuss Periscope's latest move to take on Snapchat, dive into why social video might not be able to save struggling digital publishers, and share 25 hacks to help you get the most bang for your social media buck.

Facebook continues to look less like a social network and more like a Google-esque tech goliath. During this week's developers conference the company revealed its 10-year road map, and a trove of new features, updates, and inventions that we've wrapped up with a nice bow for you below. Go ahead, stay Facebook-savvy!

1. But will the bots take off?

Facebook's foray into bots took off this week. But in the aftermath of Microsoft's disaster when its AI bot—named Tay—turned into a racist, genocide-promoting Twitter user, companies will likely wade into the bot swamp carefully, noting the risks of automated, artificial intelligence-powered "representatives."

Facebook certainly brings a new level of legitimacy to the bot crazy with its 1.6 billion users, but it could be that the AI elements don't catch on with consumers, considering humans' predisposition to hate talking to machines for customer-service purposes. The success of bots will likely depend on developers' ability to make them useful for users, as well as brands' ability to control them.

Messenger reached 900 million users last week, and now Facebook is welcoming the business community to Messenger with open arms and a new set of business-friendly tools meant to help synergize communication with customers.

First, Twitter handle-like usernames (e.g., @CornerCafe) derived from the page's vanity URL (e.g., Facebook.com/CornerCafe) will soon appear directly on a brand's page; companies that haven't claimed such a URL so that consumers can easily reach a page may want to do so immediately.

Facebook will also introduce new ways for users to start conversations with businesses. The first, Messenger Links, will enable consumers to quickly open a chat with the desired business by clicking a link in the form of short URLs with the format "m.me/username". Codes will serve the same purpose, but come in the form of unique, Snapchat-like codes that users can scan in Messenger using their phone's camera. The same codes can be used by businesses in ads, websites and other marketing materials. Messenger for business is about to get serious. 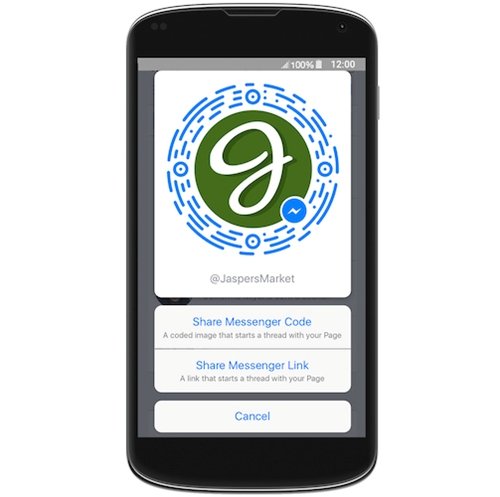 The messaging platform's 62 million monthly users can now interact with bots in new ways, including a @music bot that lets users send tracks to other users directly form the input field, as well as a @foursquare bot that uses location data to send addresses of places and venues nearby.

Telegram says it's happy to welcome Facebook to the bot game, but we think the internal struggle is just heating up. 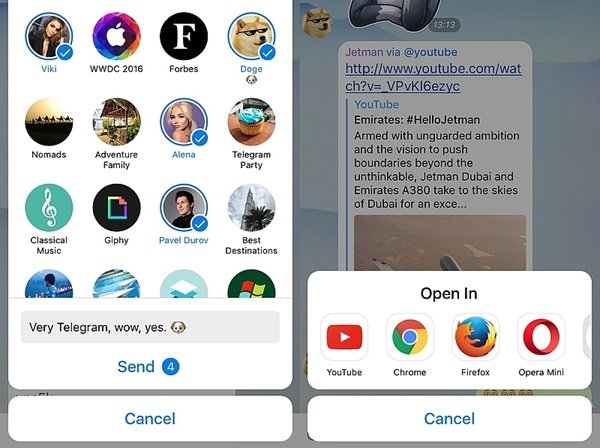 That was fast. The social network is already looking for ways to use its new bots to monetize the platform, currently testing Sponsored Messages. They serve as a way for businesses to re-engage consumers who have previously started communications with them.

Another ad type, Click To Message, would appear in a user's News Feed and act as a call to action to start a conversation with a brand in Messenger. Here, the brand could personalize its offering based on the user's bot interactions on a platform the customer is already familiar with, rather than sending the user to an unfamiliar e-commerce site where he or she might find difficulty navigating.

5. Periscope giving some the ability to live-stream doodle

The social media emulation game is still strong, this time with Twitter's Periscope testing giving streamers the ability to doodle over their broadcasts in real time. Beta users can doodle in three colors, but the markups disappear in a few seconds, indicating they'd most likely be used to highlight specific objects or people in a broadcast.

No word whether the feature will make its way to the app so that everyone can give it a shot, but it appears to be an effort to make the platform more interactive, and it's oddly reminiscent of Snapchat's more permanent doodles that have become an integral part of the platform. 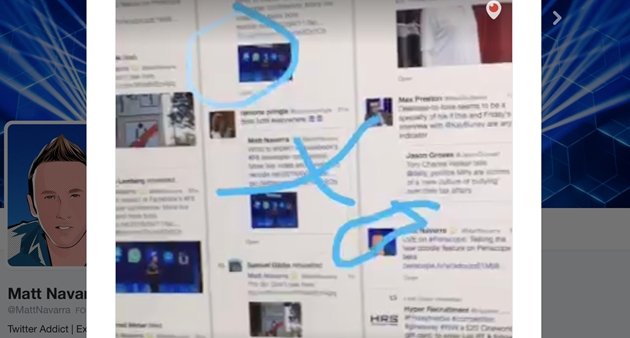 Facebook introduced two new features even before taking the stage at this week's F8 event. Users can now use Chat Heads while video calling friends, so those talking are no longer limited to a full-screen chat and can instead multitask. If you're an Android user, you can also switch between apps, all while keeping the conversation going.

The social network also added support for Dropbox to make it easy for users to drop files from the platform directly into Messenger conversations by selecting the "More" button on the platform. Images and videos will appear instantly, and other files will appear as a Dropbox link. 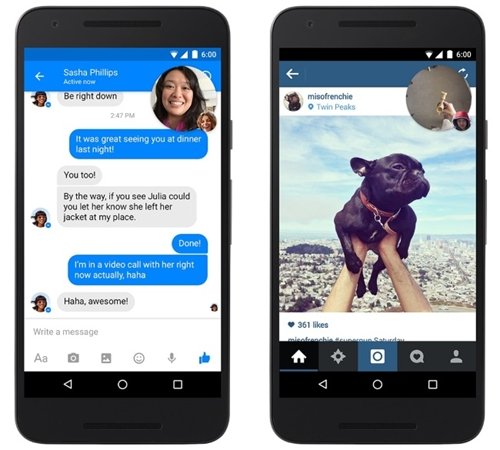 7. Despite the hype, video probably can't save struggling digital publishers... for now

Social networks and revenue-starved publishers are prioritizing video, and big brands are investing heavily in it in an effort to reap the benefits of a medium that works well on both big screens and mobile.

However, big barriers stand in the way of video's saving the day: It's costly and time-consuming, and it's incredibly difficult to scale.

In a lesson for big and small brands alike, both barriers go to show that video made for video's sake is a losing strategy, and that value-adding content—whether text, photos, or video—has a better chance of succeeding.

Facebook might provide scale, but until the company's video ad products provide a source of revenue for publishers, brands must weigh the costs and benefits accordingly.

Facebook-verified pages can now share any type of sponsored content they'd like (text, photos, videos, Instant Articles, links, 360 videos, and Live videos) on the platform, so long as a sponsor is tagged.

There are still some notable exceptions to the rule—persistent watermarks, pre-roll ads, and sponsored profile pictures or cover photos are still forbidden—but the change gives Facebook's heavyweight publishers a new way to make some cash as they increasingly host their content on the social network.

9. Social media hacks from the pros

Twitter might say you're limited to 140-characters, but what if we told you there was a workaround? From muting trolls on Facebook without deleting their comments to verifying the effectiveness of an influencer, we've got 25 largely unknown tips and tricks that will help you get the most out social!

Planning a night out via Facebook just got a little bit easier, with the two ticketing giants announcing plans to begin selling tickets to a select events directly on the social network.

Facebook will collect an affiliate fee, and the Ticketmaster initiative set to launch by the end of the month, but buyers will still have to claim their purchase on the Ticketmaster website or app. Eventbrite purchases and retrieval will be completed within the app itself, with users receiving a QR code for easy entry. 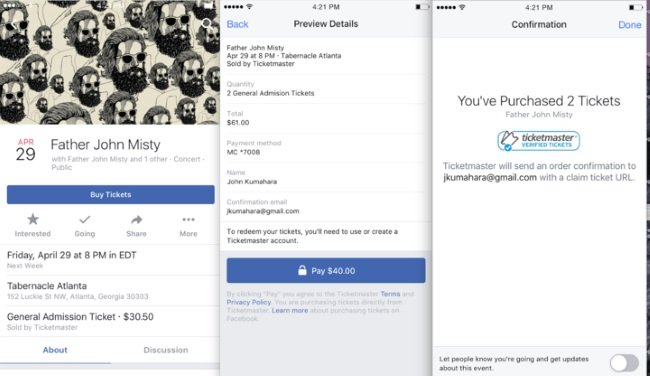 Sometimes we get so wrapped up in our social media analytics software of choice that we forget how valuable a tool a social platform itself can be.

From using the Twitter analytics dashboard to tailor content for custom audiences, to using it to analyze pasts posts and replicate key characteristics of high-performing tweets, you've got four indispensable tactics for brands to maximize their Twitter potential. 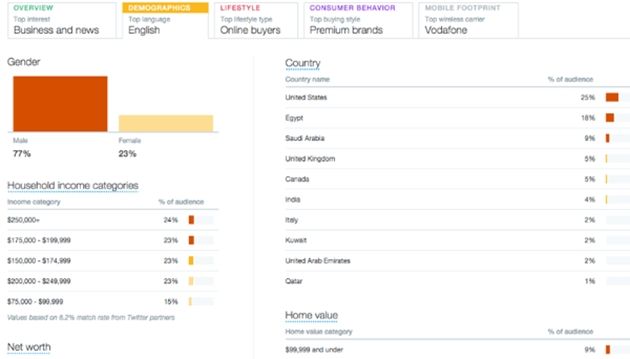 The company revamped its mobile app last week, adding a dedicated Facebook Live tab at the bottom to push users to consume and broadcast live video streams on the platform. Now, it's stepping into YouTube territory by incorporating a video search engine whose results will show both Live and other videos based on keywords and trending topics.

In a plea to attract Snapchatters, Facebook is also introducing a set of five Live Filters, soon to be followed by the ability to draw and doodle on a video while broadcasting. Shots fired! 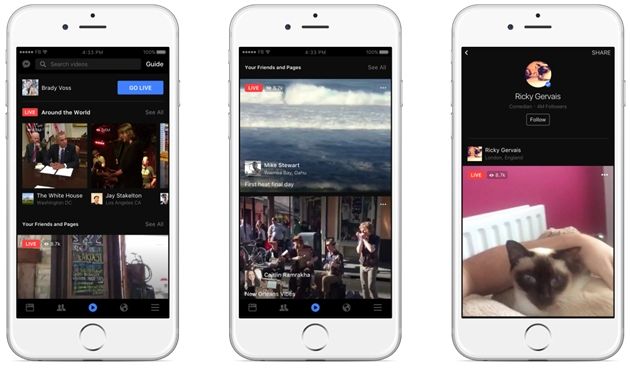 Buzzfeed took to Facebook Live video last week, and its results could have Hollywood shaking in its boots. In true Buzzfeed fashion, the social news and entertainment company used Facebook Live to show the world how many rubber bands it takes to blow up a watermelon (nearly 700, it turns out).

The results? The broadcast peaked at 808,000 viewers—more than the average number of viewers for TV shows, including TBS's Conan, HBO's Girls, and AMC's Halt and Catch Fire!

TV's certainly not dead, and live video might not be the next great shift in media consumption, but remember that it's all about where the eyes are. And, right now, it seems that Facebook and Buzzfeed have all eyes on them.