Making the rounds on social media this week: Twitter and Pinterest were targeted in a massive cyberattack; Instagram made headlines as the latest social network to make a foray into live-streaming; Microsoft plans to compete with Slack; Facebook introduced new features for business pages; Twitter plans a massive round of layoffs; Snapchat viewership declines; five ways B2B marketers can effectively use Facebook; and much more...

Skim for all the important bits!

Twitter announced on Thursday it will shutter Vine, the seven-second looping video social platform it purchased in 2012, in the coming months. Vine has been struggling as many of its famous viners have moved to YouTube, Facebook, and Instagram.

The move is likely a bid to appease Wall Street and make a buyout more appealing, but also makes sense considering more than half of the platform's top 9,725 accounts had either deleted their profiles or not posted any content since the start of 2016.

Don't worry, though, Vine will warn you before it's no longer accessible so that you can download your former creations and relive the magic forever.

Three waves of cyberattacks, which also affected Mashable, Reddit, Spotify, The New York Times, and others, mostly on the US East Coast and in Southern California, made worldwide headlines and dealt a damaging blow to business owners.

Although senior US intelligence officials are saying it doesn't appear the cyber attacks were state sponsored or a directed effort, the way they were able to take down critical infrastructure so quickly and so widely puts into question the security of our economy, which has become so intertwined with social media and online commerce.

In an unsurprising move, Facebook-owned Instagram appears to be testing a live-streaming ability for users. Although the company hasn't officially commented, images on a Russian news site show a live video embedded within the recently introduced Instagram Stories feature.

The feature was noted by a user running a beta version of the app on Android. Considering the explosion of livestreaming, the capability seems a natural next step after Instagram's successful clone of Snapchat Stories. 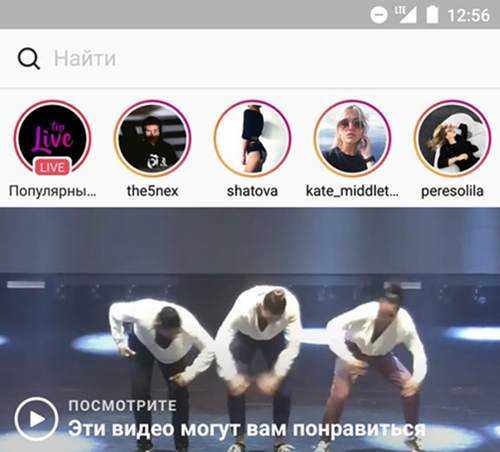 3. Microsoft to take on Slack with new collaboration platform

Although Microsoft hasn't acknowledged that it's building a Slack competitor, it's set to unveil what it has dubbed "Microsoft Teams" at event in New York next week. The platform appears to integrate channels for live chat, groups, private messaging, Skype for video and audio, Office 365 for access to the company's suite of office tools, and more.

Based on screenshots, the platform looks a lot like Slack, and Microsoft appears ready to take on the enterprise software/social media crossover field that's made Slack such a success.

Messenger, at the moment accepts only debit cards as a payment method, so the addition of PayPal provides users a new way to shop as well as pay back friends via the platform; for PayPal, it's a new opening to enhance consumer reach—important for a company some see as an old-school form of payment.

The update, first rolling out to a subset of US users, will let those with Messenger easily link their Facebook accounts to PayPal and receive payment notifications directly within the Messenger app. For loads of small and large businesses, this can be a new way to buy and sell on Facebook, helping it move one step closer to its fully integrated e-commerce ambitions. 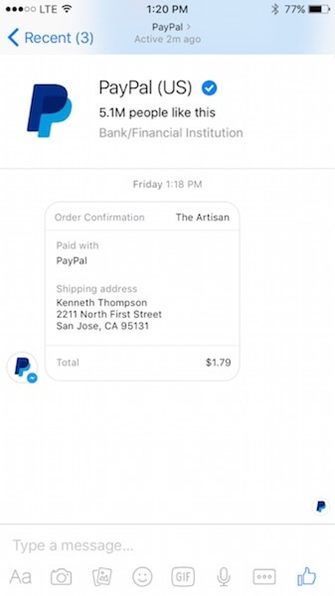 5. Has Snapchat hit a plateau?

The ephemeral messaging app nixed autoplay recently, and brands are registering a big decline in viewership as a result, leaving some wondering whether the platform has met its match in Instagram Stories.

Data from Snapchat's analytics system Delmondo found that of 100 accounts with more than 10,000 views per snap, they've averaged a 15% decline. However, many brands aren't changing their strategies; that's because they haven't seen a decrease in engagement, and because of the idea that a strong community of brand advocates outweighs a slightly higher view count. 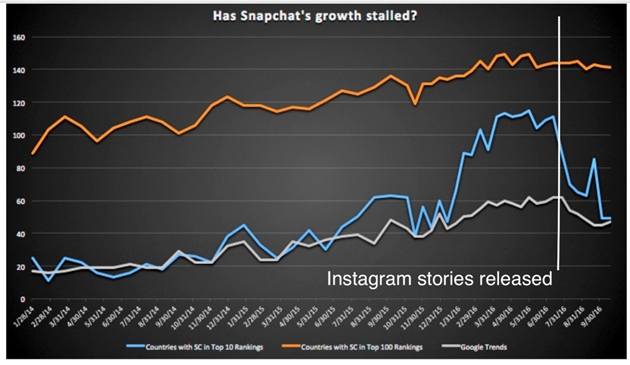 Connecting with other business on Facebook may not be as straightforward as it is on LinkedIn, but that doesn't mean the social network isn't a worthwhile platform for B2Bs. Social Media Examiner takes a look at five great ways B2B brands use Facebook to reach and build close relationships with other businesses.

Covered in detail: building an expert narrative with visuals, capitalizing on interest with a regular Facebook Live show, generating prospect audiences via Facebook ads, bolstering engagement and reach through Instant Articles, and building on visibility and engagement with native video.

As we covered in last week's Skim, the struggling social network can't seem to find a buyer, and now is reportedly planning a round of job cuts that amounts to about 8% of its workforce.

The company's losses and a 40% reduction in share price have made it difficult for the social platform to pay its engineers with stock, thus making it less appealing for top talent, which is likely to go elsewhere, such as Alphabet Inc. or Facebook. It's starting to become more questionable whether what once appeared as Facebook's biggest competitor can make the comeback it needs. 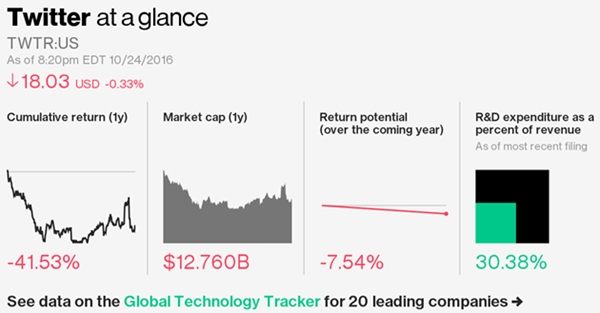 In a recent blog post Facebook announced integration with food-delivery and takeout services Delivery.com and Slice. Users now have no need to leave the social network to plan dinner because they can order food directly from the business pages of restaurants that use those services.

More importantly, the blog post introduced appointment booking, job quote, and ticket purchasing for business Pages, a big upgrade of benefits. Pages can now spur users with more specific calls-to-action, with less hassle for consumers, who have one less website to visit or number to call.

Why use a bunch of apps when you can just use one? That's the thinking for Facebook, at least. 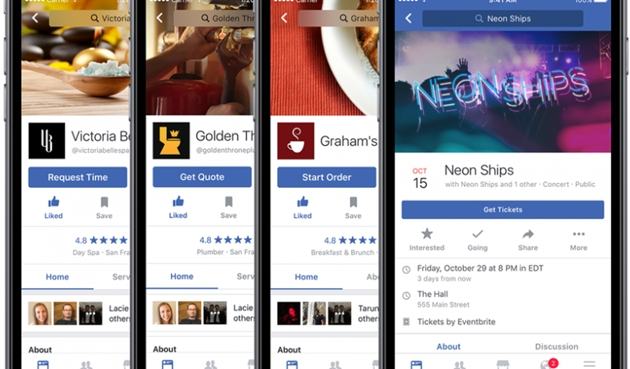 9. Think twice before your brand decides to become political this election season

Basically, nobody thinks posting about politics on social media improves our political discourse, so your brand may want to think twice about including election-centric content in your social media calendars.

A recent survey shows that roughly 50% of social media users think political discussions on Facebook and Twitter are less respectful, more angry, and less likely to solve problems than political conversations that happen... basically anywhere else.

The Pew survey also reveals that 37% of users are worn out over political posts, and 39% have blocked, unfriended, or unliked users in an effort to see fewer posts of the sort.

Even if you think your brand is publishing content in a way that ties it to current events and promotes your business, you may want to think twice before jumping on the political bandwagon, because it might just leave your business unpopular with all sides. 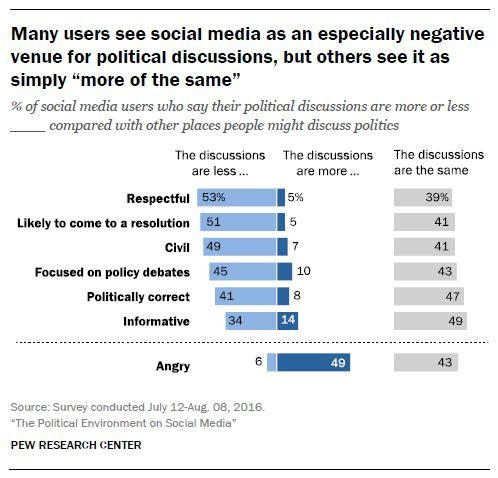 10. Some numbers to make you seriously think about using Facebook Live

With the number of users broadcasting live on the social network increasing fourfold since May, Facebook is setting out to make live-streaming as ubiquitous as status updates, and launched a new offensive of television, online, billboard, bus, and airport promo ads to do so.

Why consider incorporating Facebook Live into your social media strategy? People comment 10 times more on live broadcasts than normal videos, and watch three-times longer than non-live content. Most Facebook Live broadcasts now come from "regular" people, and the social networks wants everyone to know it's not just for public figures and celebrities. Watch below!

The future of social media have insurance companies looking at new ways to price premiums for policyholders, with sentiment analysis bolstered by advances in artificial intelligence and big data helping them create even more accurate predictive models.

Research has shown a direct link between optimistic tweets and reduced risk for heart disease, and insurers are keen to highlight these types of "safe behaviors" that they believe could reduce claims.

Some critics cite eroded consumer privacy as a concern should such modeling become commonplace, but the wealth of data housed on people's social media pages seems too appealing for brands—health insurers and others—to pass up.

Would you let your insurer access your private social media data if it meant lower premiums?

12. We'll wrap with Facebook's breaking its own community guidelines

Facebook can't seem to keep up with differing cultural norms and expectations regarding what's acceptable on the social network, and the team has thus decided to allow more posts to stay live on the site that might violate its community standards—provided that the posts are considered newsworthy.

The change in policy comes after the social giant received backlash for what some saw as inappropriate censorship in several instances, and now means Facebook will likely experience backlash from those on the other side of the fence who believe the social network doesn't do enough to monitor and protect users from inappropriate posts.

What do you think about Facebook's new approach?