Email and search marketing still have the greatest influence on consumers' online buying behaviors, whereas social media, though it generates awareness, is rarely associated with direct revenue, according to a study by Forrester Research and GSI Commerce.

Most online consumers are influenced by Web marketing messages: 77% of buyers of hard-goods items (e.g., sporting goods, toys/games, and health/beauty products) during the 2010 holiday season interacted with some type of marketing tactic prior to purchase.

Similarly, 82% of buyers of soft-goods items (apparel and accessories) during the same period were influenced by digital marketing before making a purchase.

Below, other findings from The Purchase Path of Online, conducted by Forrester Research on behalf of GSI Commerce.

The above data exclude purchases made during the peak, promotional periods of Thanksgiving weekend and Cyber Monday. 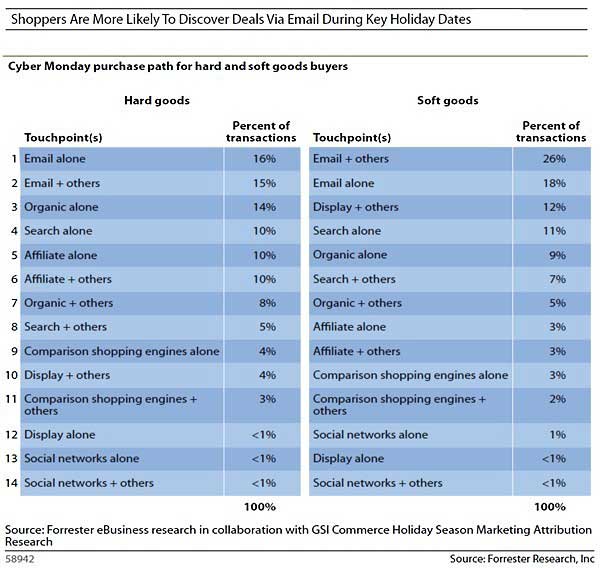 Social tactics were largely in ineffective in driving direct sales: Less than 2% of orders were a result of shoppers arriving via social network.

Even so, roughly 7% of consumers say they learned about 2010 Cyber Monday deals via Facebook, Twitter, and other social networking sites.

Display and affiliate marketing influence the purchase funnel.  For example, display ads are the first touch-point for roughly 12% of soft-goods buyers on Cyber Monday, but those shoppers then click on other marketing messages, which ultimately receive "credit" for the sale, according to the report.

Most retailers employ "last-click" analysis, so any tactic that is primarily "first click" is likely to be undercounted in its contribution to sales. Similarly, because of the last-click attribution framework, affiliates (3%) may be undervalued in ROI analyses.

Read more about the report on the Forrester and GSI Commerce Tweet Jam.