Using a personal, human voice when communicating via social media leads to much higher user satisfaction ratings than impersonal communication from businesses and nonprofits, a University of Missouri researcher has confirmed.

Moreover, users have stronger intentions to engage in positive word-of-mouth (WOM) on behalf of organizations when their social networking site has a human presence rather than merely an organizational presence, according to the study.

Titled "The Use of Human Voice as a Relationship Building Strategy on Social Networking Sites," the study is authored by Missouri School of Journalism doctoral candidates Hyojung Park and Hyunmin Lee.

"There is great value in using a human voice when communicating and developing good relationships with the public," Park said. "Levels of trust, commitment, and satisfaction from users all appear to be positively affected by the use of the human voice in social media," she added.

One way for companies to build positive relationships via social media is to use names and images of company representatives, the research found.

"Perceptions of relationships with an organization seem to be significantly more favorable when the organization's social networking page has a human presence rather than an organizational presence," Park said.

In the study, the researchers presented participants with mock social media websites of large for-profit and nonprofit organizations, complete with user comments and direct responses from the organizations' public relations representatives. The user comments ranged in tone from positive to negative and neutral. Some of the mock social media sites included the name and picture of the organization representative with their messages, whereas the other sites included no names or pictures—only an organizational presence.

Researchers had made four hypotheses before performing the study:

Only the third—stronger intentions to engage in dialog with the organization—was not supported by the research findings, which are summarized in the following table: 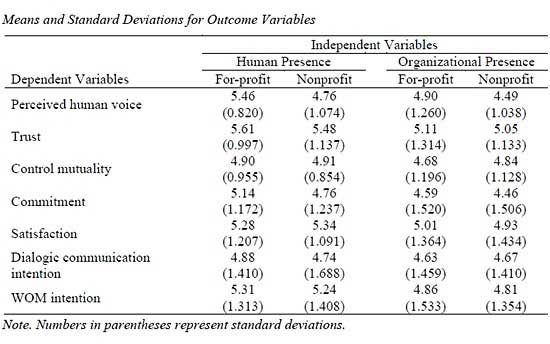 "Communicating in a human voice adds a sense of personal and sociable human contact to the interaction with the public," Park said. "We have evidence that perceived conversational human voice may promote trust, satisfaction, and commitment in relationships between an organization and the public, which in turn results in favorable behavioral intentions toward an organization."

Park presented the study at the International Public Relations Research Conference in March and won the top student paper award for her work.