LinkedIn continues to dominate the executive corner of the social media universe with a highly-engaged member base: 61% of registered LinkedIn users say LinkedIn is the social site they use most for professional networking, and 35% check the site daily, according to a survey from Lab42.

Another 32% of registered LinkedIn users check the site several times a week, and 16% check it a few times a month. 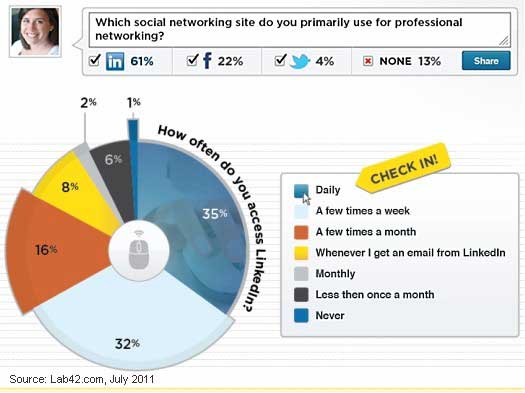 Some 8% of LinkedIn users log in whenever they get an email from LinkedIn.

Below, additional findings from Lab42's survey of 503 LinkedIn users.

Most Users Keep Profiles Up to Date

Most LinkedIn users (42%) say they update their profile information regularly and 38% say they change it every now and then; only 7% have never updated their information. 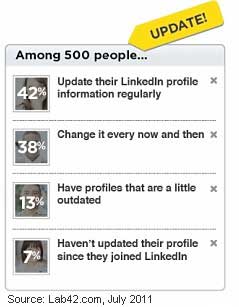 Most (81%) LinkedIn users say they belong to at least one group; among them 52% participate in group discussions.

How People Use LinkedIn

Nine in ten LinkedIn users (90%) say the site is useful to them. Asked how they use the site most, LinkedIn members cite the following top 5 activities:

Professionals' priorities do tend to vary by job level. For example, entry-level professionals use LinkedIn for job hunting most (24%), whereas fewer top-level (9%) and middle-management (8%) professionals do. Industry networking, however, appears to be a top priority for roughly 20% of LinkedIn professionals, regardless of job level. 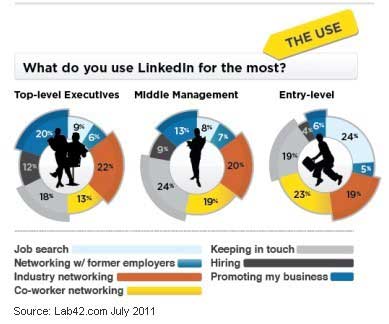 Only 18% of LinkedIn users say they don't have a profile picture.

Roughly one-third of LinkedIn users (37%) say they have a picture and update it frequently; another third (33%) rarely update their picture and 12% have never updated it.

About the data: Findings from a survey of 503 registered LinkedIn users, conducted by Lab42.com in July 2011.