Social networks and blogs now reach 80% of online adults in the US and together account for nearly one-quarter (22.5%) of the time Americans spend online, according to a report from Nielsen.

Below, additional findings from the State of the Media: The Social Media Report, Q3 2011, by Nielsen NM Incite.

Americans spend more time on Facebook than any other social media brand: In May 2011, online adults spent 53.5 billion minutes using Facebook, up 6% from 50.6 billion minutes a year earlier. 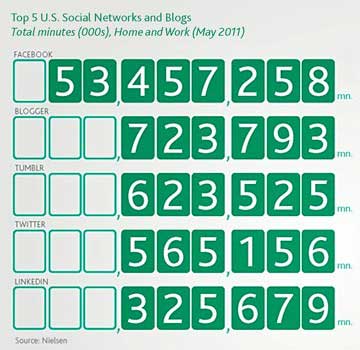 Facebook reached 70% of active online US adults in May; among them, 62% were women, according to Nielsen.

Mobile technology is a big enabler of social networking use. Though most (97%) social network users visited via computer in May, more than one-third (37%) did so via mobile phone; fewer accessed social networks via gaming consoles (3%) and iPads (3%).

As of May 2011, the number people accessing social networks via mobile devices grew 62% year over year (YOY), but adoption among online adults age 55+ registered the largest increases, up 109% YOY. 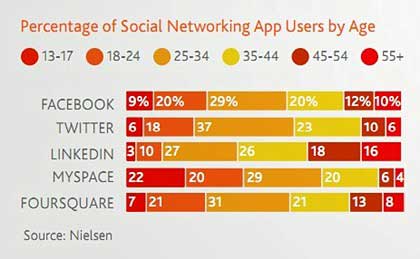 Among the various activities people conduct using their smartphone, accessing social networks is the second most valued (30%)—less so than accessing GPS systems (56%), but more so than playing music (26%) or browsing the Web (26%). 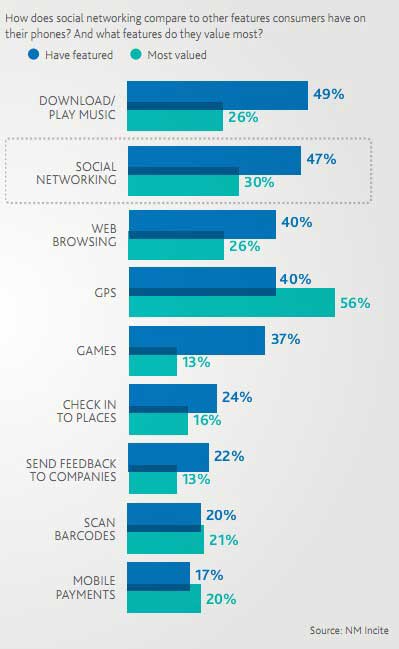 More than one-third (37%) of smartphone owners use their devices for gaming, but far fewer (13%) value the functionality, whereas a fair number of people pay bills via their device (17%) and value that feature (20%).

More women view online video via social networks, but men spend more time doing so.
In May 2011, over 31 million people in the US watched video content on social networks and blogs, viewing nearly 157 million video streams. Although roughly 4,000 more women than men viewed video on those sites, men were the heaviest users, streaming more videos and spending 9% more time watching.

Tumblr on the Scene

Tumblr has grown to become the eighth largest site in the US Social Networks and Blogs category, reaching 11.8 million users in May 2011, up 183% from 4.2 million in the previous year. 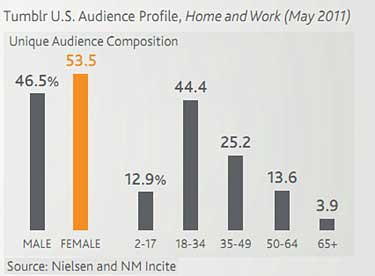 About the data: Findings from Nielsen's State of the Media: The Social Media Report, Q3 2011, are based on Nielsen NetView home and work data, collected in May 2011; and NM Incite's State of Social Media Survey, based  on a representative sample of 1,865 adult (18+) social media users who were recruited from the Nielsen Online Panel, conducted March 31 to April 14, 2011.