Although online shoppers who arrive at retail websites via Facebook and Twitter are less likely than those who arrive via search engines to make a purchase, they tend to spend more money when they do buy, according to research from RichRelevance.

Shoppers who click to retail sites via Facebook convert 1.2% of the time on average, while those who arrive via Twitter convert 0.5% of the time. By contrast, conversion rates are higher for major search engines such as Google (1.9%), Bing (2.4%), and AOL (2.9%). 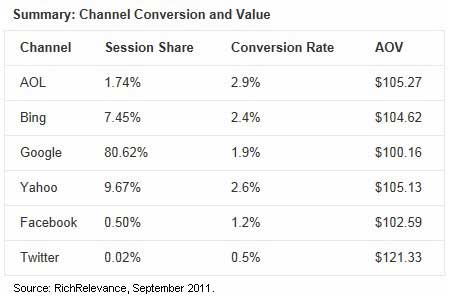 Among all online shoppers, however, those who arrive at retail sites via Twitter have the highest average order value ($121.33), whereas those who arrive via Google spend roughly 20% less ($100.16).

Though traffic from both Twitter and Facebook to retail sites has grown dramatically in the last year, according to the study, those networks still account for a very small portion of total traffic (less than 1%).

Among social media platforms, Facebook is growing the most dramatically as a source of retail shopping traffic, growing its contribution some 92% between August 2010 and August 2011.

AOL, however, has the highest conversion rate, slightly edging out Yahoo for highest average order value ($105.27).

Other key findings, issued by RichRelevance:

About the data: Findings are derived from the analysis of customer viewing and shopping behavior of selected major US online retail sites in August 2011. During the one-year study period, such sites hosted more than 200 million shopping sessions, resulting in over four million orders for a total value exceeding US$500 million.