Do Social Media Spaces Belong to the Consumer?

Businesses may be wasting time and money trying to reach consumers who resent brands intruding on their social networking spaces: Fully 60% of socially networked Americans say they don't want to engage with brands via social media, according to the Digital Life study by TNS, a Kantar company.

The 60-country study found that people living in developed markets* are the least likely to welcome communications from brands via social channels, whereas those in developing markets** are more open to brand communications. For example, among surveyed consumers who use social networks:

People Engage Online to Give Advice

Nearly one-half (47%) of Internet users worldwide post comments online about brands, but that number varies by country. For example, 74% of Chinese consumers comment online, compared with 32% of American consumers.

Among the 32% that engages online with brands here in the US, most (39%) say they are motivated by helping others, whereas 31% simply want to share their thoughts and 18% want to praise a brand. 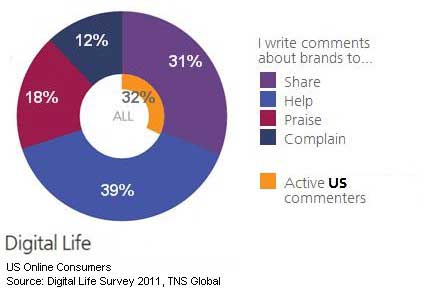 Some 12% of active commenters post comments online primarily to complain.

Not surprisingly, comments written by friends are trusted more than those written by strangers.

Among consumers who read friends' online comments, 61% say they trust the comments, whereas only 41% trust comments from strangers: 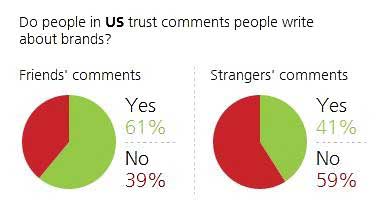 TNS has made some of the key findings from this study available to the public via interactive data visualization.

About the data: Findings from TNS's Digital Life Study was conducted online, in-person, and via phone in July and August 2011 among some 72,000 consumers in 60 countries.