Pinterest is arguably the hottest social media site on the Internet—user traffic to the online social catalog has skyrocketed since mid-2011—but the website also boasts strong audience engagement, retention, and "virality" among its core demographic, according to a report by RJMetrics.

Based on data collected and analyzed by RJMetrics, key findings from the report include:

Below, detailed findings from the RJMetrics report Pinterest Data Analysis: An Inside Look.

Pins Connect to a Vast Array of  Web Sources

On Pinterest, every pin (or linked image) ties back to an external link. Among a sample of roughly 1 million pins, more than 100,000 distinct source domains were found.

Among those 100,000 domains, the following chart shows the top 20 sources. The most popular domain was Etsy, which powered just over 3% of pins. Google was a close second, though almost all Google links point to Google Image Search, which is technically misattributed content from other 3rd party domains, RJMetrics points out. 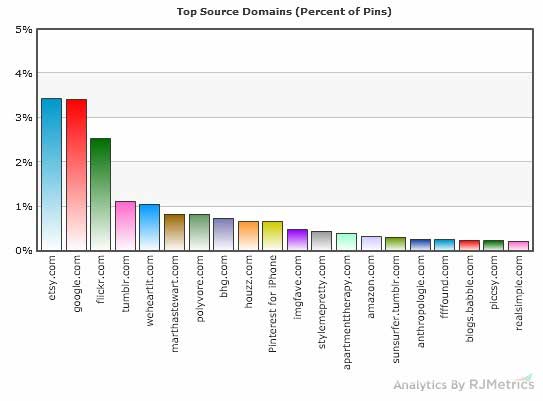 The Viral Nature of Re-Pins

The analysis also broke out the population of pins by how those pins were posted to Pinterest.

Remarkably, over 80% of pins are re-pins, demonstrating the impressive level of "virality" at work in the Pinterest community. 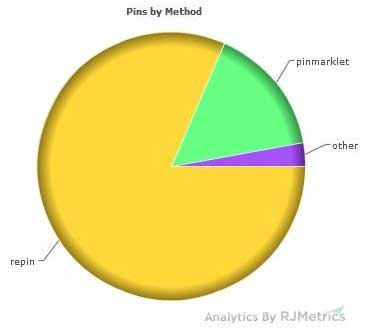 By contrast, a study conducted by Hubspot at a similar point in Twitter's history found roughly 1.4% of tweets were retweets.

Cohort Analysis is a tool that allows marketers to study different groups of users at identical points in time in their lifecycles, regardless of when they actually joined the site.

In the following chart, each line represents a cohort, or a segment of users who made their first pin in a specific month. For example, the June 2011 cohort consists of users who made their first pin in June 2011. The line itself shows the "average cumulative pins made per cohort member." So, the "Month 1" data-point for the June 2011 cohort shows us how many items were pinned in June 2011 among users who joined in June 2011. The "Month 2" data-point on that same line shows how many pins were made by the typical user in that cohort by the end of July 2011, and so forth. 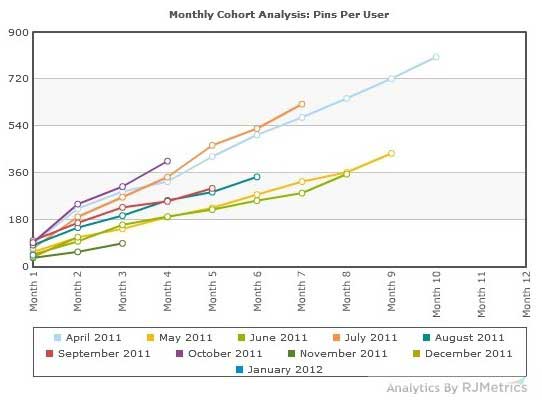 Among most most companies, even highly successful ones, similar cohort analyses show lines that steadily decay toward a more horizontal slope over time, RJMetrics points out. The effect occurs because there is some natural attrition, causing the incremental engagement of the typical user to drop off.

But that doesn't appear to be the case with Pinterest. Instead, the lines show little to no decay whatsoever. Their slopes remain consistent, indicating a net attrition rate of close to 0%.

Why no decay in engagement? The reason, according to the study, is possibly one of two factors: (1) no one who starts using Pinterest ever stops or, more likely (2) users who continue to use Pinterest become so much more engaged over time that their activities fully make up for those users who quit the site.

To explore the issue further, RJMetrics broke out the data on a weekly basis for the eight weeks ended December 18, 2011. The analysis found that between 40% and 60% of unique users were still actively returning back to the site to pin again in each of the first 8 weeks of their life cycle. Although that may seem like a steep drop-off, the results are exceptionally strong, particularly for a consumer Internet business, RJMetrics notes. 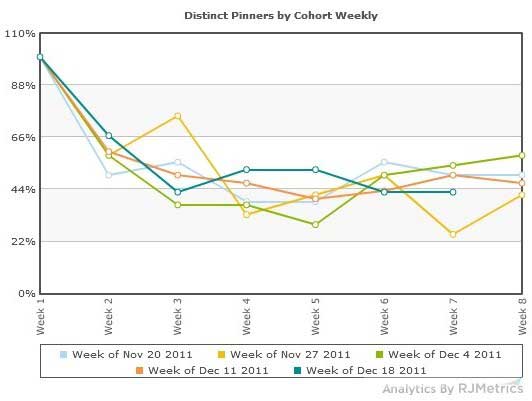 By contrast, when Twitter was at a similar point in its life cycle (late 2009) Twitter's decay rate was twice that of Pinterest, with user activity (measured by tweets) rapidly plummeting to roughly 20% before stabilizing, according to a 2009 analysis of Twitter by RJMetrics, published by Techcrunch.

Among most fast-growing consumer startups, however, an increase in media coverage inevitably drives a big spike in the number of registered users and a drop-off in the quality of the typical user, RJMetrics points out. (Similarly, quality is defined in the study by levels of engagement and likelihood to remain active.)

Pinterest is no exception tho that rule. The following chart shows how the typical new user who has joined Pinterest in November and December 2011 is using the site far less than their counterparts from previous months. 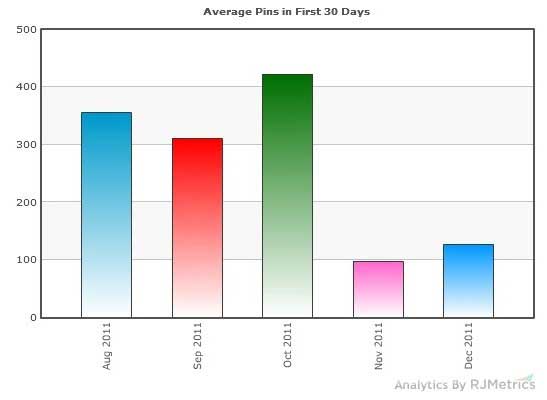 The drop off is likely caused by flocks of curious onlookers who are outside of Pinterest's core audience who are registering accounts but failing to get engaged.

In order to put the RJMEtrics research in context, it's interesting to note Pinterest's growth trends, particularly over the past six months.

Below, some key Pinterest stats, according to separate research from Compete:

About the data: For the analysis, RJMetrics wrote various scripts to identify random users who joined Pinterest at different times in the company's history, and to download their complete history of pins to conduct the cohort analysis. Several hundred thousand additional pins from the general user population were also compiled, amounting to a database of nearly one million pins, to represent the greater Pinterest population. Though the sample base is sizable, there is always a risk of sampling bias, the researchers note. In order to identify users and pins (because Pinterest does not use auto-incrementing IDs) the researchers identified user names based on common dictionary words and then expanded to general-population pins by guessing at ID numbers in numeric proximity to the pins of those core users.