'Tis the season for future-gazing... See how banner ads are getting a social makeover. Learn which social network is tops for business, what brands topped YouTube's 2013 charts, what video put the 'Net in holiday mode, and how Twitter and Instagram plan to beat back Snapchat. Skim for some social sunshine.

We give you Instagram Direct! Last week Instagram teased us with the promise of a big reveal. This just in: the social photo site's launched Instagram Direct, which lets you privately send photos and videos to family or friends. Unlike Snapchat, those pics won't disappear, though. Access the feature with the brand-new icon in the top-right corner of your feed; there, you'll find a spankin' new inbox. To share an image/video with specific people, simply click on "Direct":

Real-time giving. Airline WestJet scored plenty of local—and digital—love with its holiday execution. At a machine for scanning boarding passes at the airport, a digital Santa asked departing families what they wanted for Christmas. Then the WestJet team hustled to satisfy some of those wishes before passengers arrived at their destinations, where a branded blue Santa helped distribute the prettily wrapped presents. With over 15 million views and counting for the video, we're sure those families—and WestJet—are having a happy holiday:

YouTube's Best of 2013. Check out the top 10 viral videos on YouTube this past year. No. 1 was "The Fox (What Does the Fox Say?)"—possibly the most enigmatic meme of the year—followed by the Harlem Shake (remember that?). Three branded videos made the cut: Evian's "Baby & Me" (No. 5), that mind-splitting (and leg-splitting) Volvo Van Damme video (No. 6), and "Telekinetic Coffee Shop Surprise," a powerful teaser for the new Carrie movie. Below, find YouTube's tribute employee mashup of 2013's best social video moments. Stand up for this... the better to spontaneously dance (instead of bobbing your head on your desk chair):

Twitter also launched its top trends in 2013. Relive the hashtags that carried us, conviction-ridden and hysterical, through 12 months: #Sharknado, #StandWithWendy, and #SFBatkid are only a sampling. But we'll never get tired of this picture of Paul McCartney: 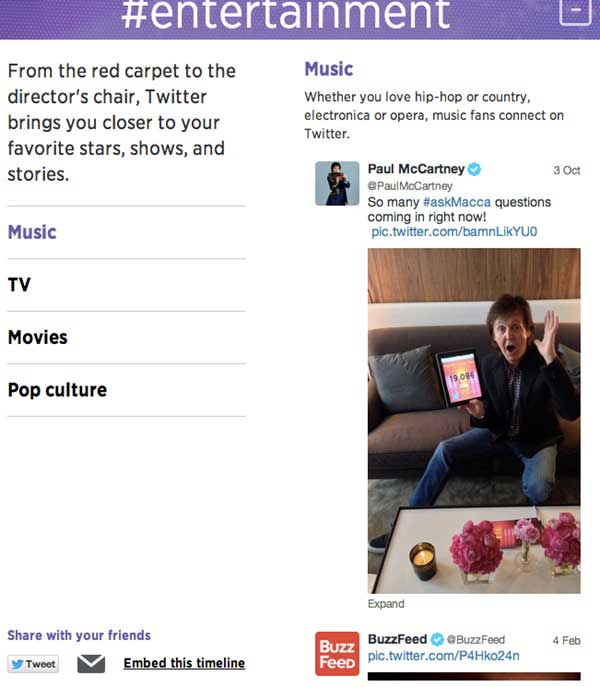 Can a tweet take on Snapchat? Speaking of our 140-character Goliath, Twitter's launched direct messages with photos, one move that it hopes will make direct (private) messaging more prevalent among tweeters. Looks like everyone's getting in on this act (see first story, above). Twitter's also moved the DM icon to the app navigation bar to make direct messages easier to access. ReadWrite suspects that this is a defensive move against Snapchat; either way, we're not complaining about more media in any of our feeds. 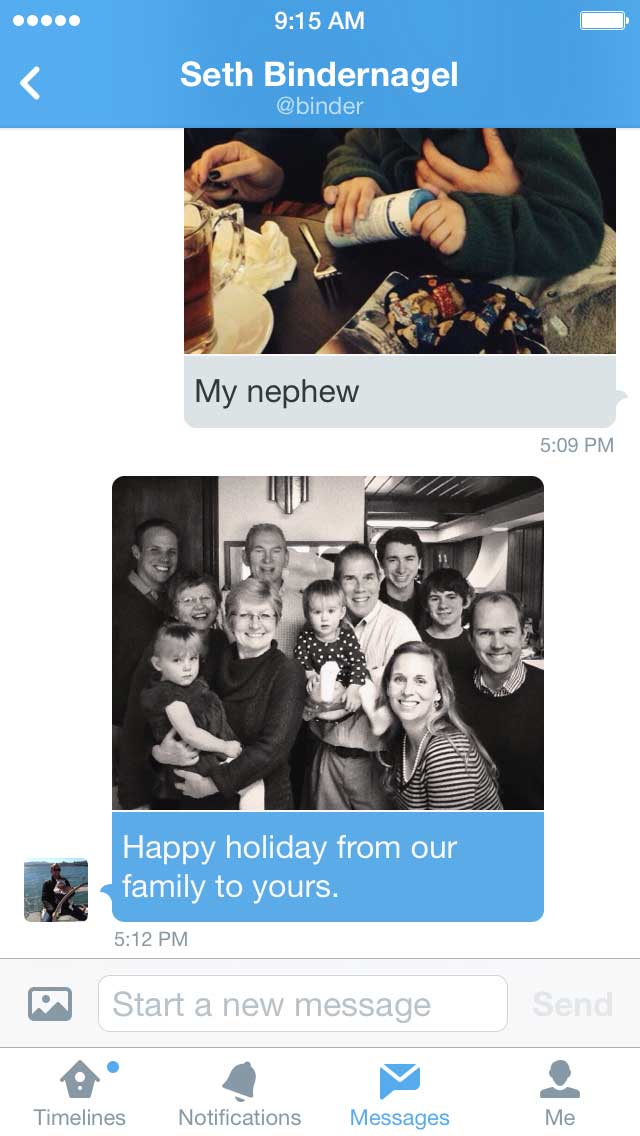 Hangout live! YouTube's expanding its livestream service to all YouTube channels (as long as your account is verified and generally well-behaved). You'll also be able to hold your Google+ hangouts "on-air," complete with multiple camera angles, closed captions... and ads! Check the feature out in your Video Manager, but if it's not there yet, don't freak out; rollout could take a few weeks.

Social banner ads from an unlikely source (or is it?). In another effort to get people using Google+, Google's launched +Posts: sponsored versions of Google+ content. The idea's pretty cool: you know how you can sponsor posts on Facebook, creating "native ads" in newsfeeds? It's the same thing, except that your +Posts (ironically!) won't appear on Google+ (since its official stance on advertising is NO). Instead, +Posts will appear as banner-ish (but also native-ish) content throughout the web, and will include the added value of letting users comment or join a Hangout. Talk about a social-age update for banner ads.

Facebook: now (auto)playing. Facebook's finally released its anticipated auto-play feature for native videos. It's is less obtrusive than we expected: If you don't want to play a video, just keep scrolling past it. Once the video starts autoplaying, you can click directly on it for sound. Expect autoplay video ads to arrive soon, but they'll likely cost a pretty penny: AdAge estimated that the 'Book can charge between $1 million and $2.4 million to share a 15-second video ad for a day. Think of that as discounted compared with the Super Bowl...?

Target tweets more ...broadly? Twitter launched Broad Match for keywords, which better equips companies to sell in-context ads against tweets. Taking into account that users often tweet the same general idea in different ways, Broad Match automatically accounts for terms related to the keywords you're targeting. Paired with Twitter's (also recently launched) features such as sentiment filtering and negative keyword match, it'll be nearly idiot-proof to ensure your hand-tailored Sponsored Tweet shows up at a conversation's primetime, whenever that may be. 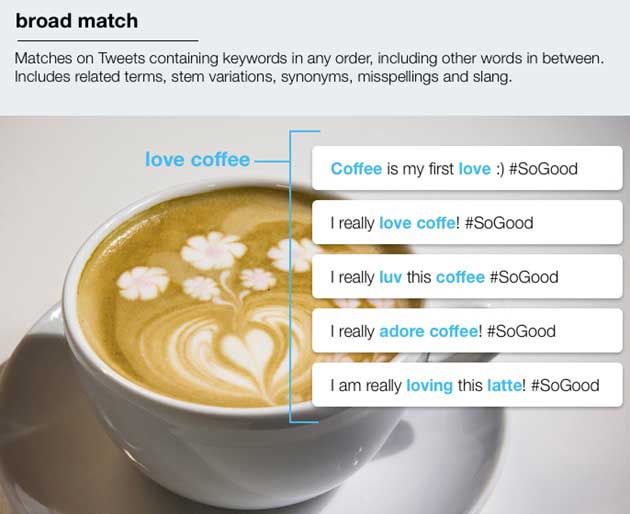 Faster, easier Vimeo "On Demand." Vimeo's updated its "On Demand" feature to include content ratings and to speed up checkout: Viewers have the option to save their billing info, making the barrier to purchase less high (and increasing the likelihood of more compulsive buys). Content ratings also let them see what others thought of your videos before they decide to pay for access. So if you ever dreamt of becoming a director, there's no need to wait for Hollywood to call. Maybe it's time to test your skills. 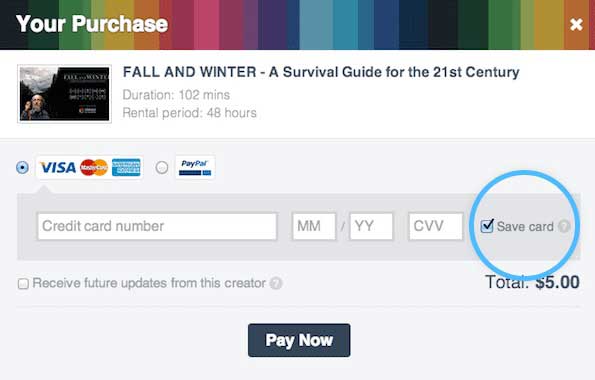 And the best social network for business is...! Instagram, according to SumAll, which found that US businesses on Insta increased revenue 1.5-3.5%, and UK businesses... 3.6%. And that's with unpaid, organic traffic (so no sponsorships) over the last 11 months, vs. Twitter, Google+, and Facebook. We admit to being shocked, then we wandered off and Liked another Starbucks photo.

You tweet, iTweet. Late last week Apple snapped up Topsy for a purported $200 million. The latter is a Twitter analytics site that analyses over 500 million Tweets per day to report on user sentiment and product popularity. The buy is odd for a company that isn't much known for its social cred, but it's likely that Twitter's growing strength in social TV may have motivated it. Since Twitter's also been known to use Topsy from time to time, this may also facilitate (or force?) more collaboration between the two companies. More tweets in your hardware!

MindMeld... with your iPad. Expect Labs just released MindMeld for iPad. Think of it as an assistant perpetually standing beside you (or in this case, in your arms): The voice chat app can listen to up to eight people talking at once, then pull up related links based on context. Bookmark what you find useful. You can also use it for dictation: It does the research while you're talking! The intern researcher you've always wanted can be yours for just $3.99.

Surprise! Social media affects B2B tech purchases. By now you should be rolling your eyes and saying, "Nobody needed to tell me that." Well, Starcom MediaVest still thought it worth analyzing the social conversation of 500 business and IT-decision-makers, so now there's proof. The tech purchasing cycle was divided into stages, from awareness to consideration to purchase to post-purchase, and social media use at each was closely examined. Over 13% of social media conversations about IT purchases happened during the awareness phase, when people are discussing new products (typically discovered on tech blogs or via other Twitter users).

Let's wrap with some girl power. Pantene Philippines released a riveting ad that showcases how women are perceived when they try stepping out in life and at work (authoritative men are seen as bosses, while authoritative women are seen as bossy. Surprised?). The ending encourages them to "whip away" double standards and shine, stoking the fire with a hashtag that ties empowerment to hair-swishing (convenient!): #whipit. The video's generated over 5.6 million views... and as for how the hashtag's doing? See for yourself. Learn from Pantene: This year on social, #whipit (maybe use a different hashtag, though).