Mary Meeker's state of the Internet, #YesAllWomen, LinkedIn headline do's and don'ts, and how Twitter might breathe new social life into the Billboard charts. Do read on. Don't skip your week's dose of skim!

Mary Meeker's 2014 Internet Trends. It's that time of year! Mary Meeker's released her latest (and anticipated) report on where the Internet's headed. We suggest reviewing all 164 densely packed slides; but, if you can't, TechCrunch broke down the key insights. A few: Mobile now accounts for 25% of all Web use, app purchases comprise 68% of money made on mobile, and social networking is shifting from broadcasts to more selective sharing. You are forewarned. Also: Brush up on cyber security, because threats are rising.

A tweet that took 45 days? Social media pros are abuzz about a Président Camembert tweet that took supposedly 45 days (and up to 13 specialists!) to create—getting 2 Favorites... and little more else. (That is, until the media got a hold of it.) A Business Insider article, written to highlight the efforts that go into a single corporate tweet, won Président a flurry of ridicule and derision over the time and money brands waste for a result that's trademark "work by committee." (To be fair, all that effort was to create an entire campaign, not a single tweet.) The tweet was part of a promotion, #artofcheese, which—thanks to all this attention—is attracting more pungent entries than planned, whether deserved... or not.

Sharing a Camembert with friends? (How generous!) Get the best flavor by serving at room temperature. #artofcheese pic.twitter.com/R6iWPeKv1z — President Cheese (@presidentcheese) April 30, 2014

Are your selfies #tryingtoohard? The Social Effort Scale, released by Axe, analyzes selfies to gauge whether they're "effortless," "trying too hard" or "not trying at all." According to the science, guys who try too hard tend to lose ladies' interest really fast, whereas effortless shots win the screaming ovarian masses. It's a smart leap on the selfies craze with a value-add on top, plus it advances Axe beyond its "use us and girls will fawn" positioning to something more interesting: Be yourself, and maybe girls will like it.

When content creation gets High Maintenance. Vimeo's investing in its first original show, an additional six episodes of Web series High Maintenance, created by 30 Rock casting director Katja Blichfield and Ed Sinclair. The new episodes will appear on Vimeo On-Demand, an effort to support original content creators (and make money for itself). It joins Amazon, Netflix, and Hulu, which have also begun producing or supporting exclusive content. Hulu notably hosts Chipotle's Farmed and Dangerous Web series; reviews aren't bad (rating an IMDB 8 out of 10). If you've ever considered storytelling on a larger scale, you've never had more allies.

Twitter takes Billboard real-time. The microblogging network is partnering up to launch the Billboard Twitter Real-Time Charts, which measures song popularity by scanning interactions for certain links and hashtags. There are two charts to watch: the Billboard Trending 140, which compares how often songs are shared in the past hour with the hourly average of shares in the last day; and Billboard Twitter Emerging Artists, which ranks songs by artists who have fewer than 50,000 followers. You'll also get summaries for the most popular tracks on Twitter. 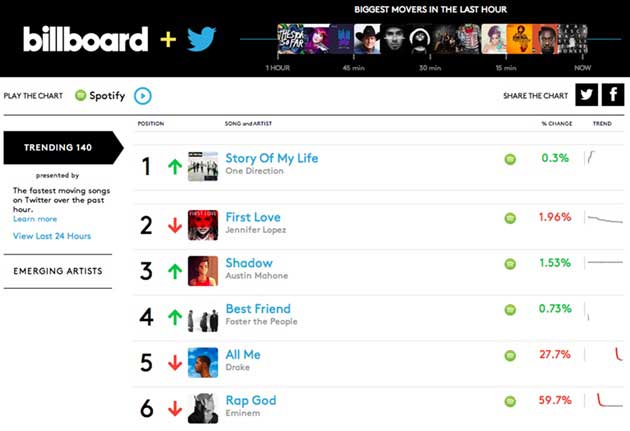 Ace your LinkedIn headline. Tobias Schremmer provides handy tips on how to polish up your LinkedIn headline—and what to avoid. (No "handsome devils." please.) He includes examples of strong headlines, and useful resources: When editing your profile, take advantage of LinkedIn's "Show Examples" and "See what others in your industry are using" options. They'll lend a sense of how others in your space position themselves. Use that data to beat the crowd in a 300-million person pool.

This can't be Snapchatted away. Snapchat co-founder Evan Spiegel is in the media spotlight for some leaked emails from his college years (Spiegel's in his early 20s), which include crass references to women and some endorsing of substance abuse. Many say that's typical frat boy talk; Spiegel says he's "mortified" and the emails "in no way reflect who I am today or my views towards women." But Business Insider's Jim Edwards says the emails do matter: They magnify a tech culture that's historically closed to women. He also observes the emails were leaked on the same day Google admitted that 70% of its employees are male. When building your company, take a look at its people and consider what message they give outsiders. People care as much about your culture as your service.

Notably, in top news this week a gunman in Santa Barbara went on a killing spree as "retribution" for women's refusal to love him or sleep with him (an angry admission that he broadcast on YouTube), sparking online movement #YesAllWomen—a hashtag that thousands of women are using to share fears, stories of rape or abuse, and anger at being seen as objects or trophies, or as deserving of punishment if they refuse men's advances. Faced with so many 140-character tales, Forbes's Tom Watson says #YesAllWomen presents "a scary, desolate, dystopian landscape that can and should shame us into abandoning silence." 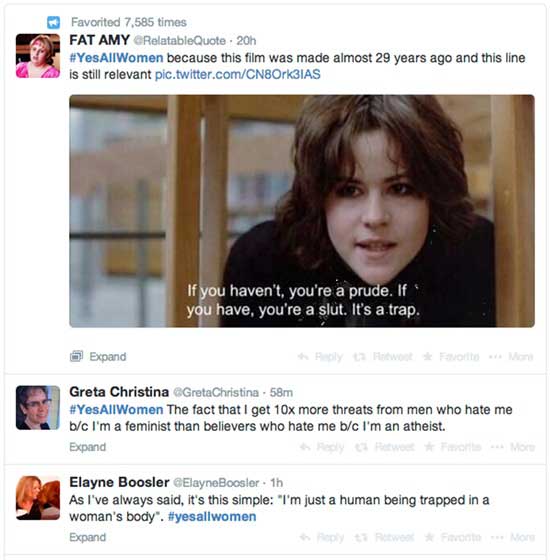 A study in building rituals. Apple's always done a good job of using beautifully produced ads to show, and not tell people, how to use their products. These new iPad ads go a step further, illustrating how creative icons incorporate the product into their work. Pro tip: Show users how your product will improve their lives, or help them do more of what they like.

What makes an ad viral? The short answer: Strong emotional pull and social motivators, writes Ayaz Nanji, reporting on an Unruly study analyzing the most-shared ads of the Super Bowl. He also reminds us that virality doesn't equate to brand recall: Only 7% of consumers remembered the brand whose Super Bowl ad featured Bob Dylan (Chrysler). For better recall, we suggest consistency and a clear value alignment: Cheerios' "Gracie" ad, which enjoyed 95% brand recall, is part of a year-old campaign featuring Gracie and her mixed-race family.

We'll wrap with some reverence. Celebrated poet, writer, and civil rights activist Maya Angelou died this week at age 86, and her own warmth-filled words are filling our newsfeeds. For us, her last tweet is a tribute to her legacy—encouragement and a guide for issues personal, political or professional:

Listen to yourself and in that quietude you might hear the voice of God.