Get the week’s scoop on new Tumblr CTAs, discounts via Twitter Offers, Thanksgiving Vines, and Hemingway in 15 seconds. Skim for your second tryptophan high (or is it low?)!

Turkeys on Vine. New Media Rockstars compiled a few Thanksgiving-inspired Vines for those not yet ready to return to a reality with no turkey-starred feasting over the horizon. The one below is probably the most all-encompassing, although it ends rather unhappily:

A very Westjet Christmas. On Christmas eve last year, Westjet brought a magic sleigh to a community in the Dominican Republic, where families could sit and tell Santa what they wanted most for Christmas. The next morning, employees granted those wishes, bringing not just gifts but also snow... and Santa himself. The video is climbing the Viral Video Charts and has already hit over 2 million views.

e-shopping hits a new high. For the first time ever, Cyber Monday online desktop spending hit $2 billion, up 17% from last year, making it the heaviest online spending day in history... and the only day to ever surpass $2 billion in sales. But Thanksgiving weekend in general was strong, with Saturday hitting its first-ever billion-dollar online shopping day (and Sunday not far behind). The combined two days amount to an increase of 26% versus last year. comScore chairman emeritus Gian Fulgoni calls it "an accelerating shift to online buying as mobile phones spur increased showrooming activity."

Hemingway for the Instagram generation. Who says literature is dead? The Ernest Hemingway Foundation of Oak Park, IL, partnered with Ogilvy & Mather Chicago to create a charming series of 15-second Instagram videos that bring Hemingway's novels to life. This is a lovely example of using social tools to transmit classic stories to new eyes. Below you'll find their treatment for The Old Man and the Sea, but you can also see more here.

The Old Man and The Sea in 15 seconds. Learn about Hemingway's own fishing adventures at The Ernest Hemingway Foundation of Oak Park. #ehfop #hemingway #oakpark #papa #theoldmanandthesea #book

It's a #SoloSelfie revolution.
Beats By Dre is building on the selfie trend with #SoloSelfie. A campaign video shows a montage of star-studded selfies featuring Beats headphones, but in the how-to video below, users are encouraged to join in (and post using the #SoloSelfie and #BeatsByDre hashtags, of course). We sense more (sponsored) selfies in the future.

The best channels for online promotion. Column Five's created an infographic that explains the difference between earned, owned, and paid media, which platforms make the most sense for each, and what the benefits are. It also describes the offline sales impact of each. This one's worth printing out. 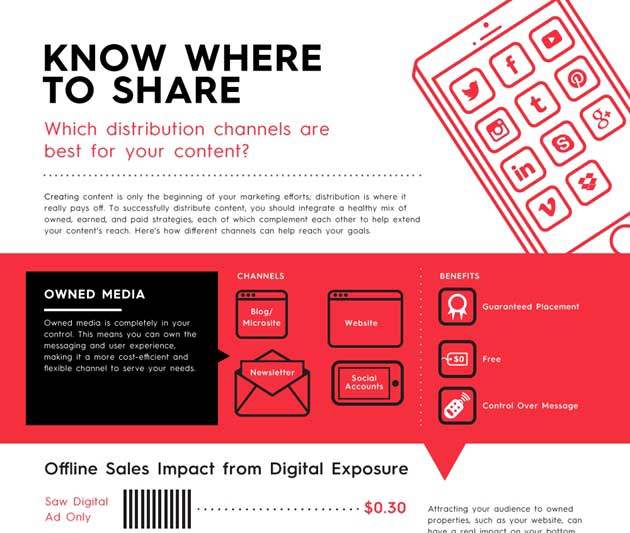 What better way to say thank you than with Facebook? For Thanksgiving, Facebook launched "Say Thanks," which lets people choose someone from their friends' list, select a video theme, then add pictures and wall posts about the both of them. The result is a video that lets you say thank you while promoting different moments in your relationship. There is no limit to the number of videos people can send—which is great if you're tired of writing thank-you cards, and great for Facebook, which is ramping up its video investments. But one of the best ones we've found turns the idea on its head: Instead of giving a warm, cuddly thanks to a family member or close friend, one man said thanks to his ex-girlfriend, filling his video with awkward, sometimes funny moments from his life post-breakup... like the one time he listened to Adele all alone.

Say hello to Twitter Offers. In a big step into commerce, Twitter's launched Twitter Offers in the US, enabling consumers to take advantage of discounts you tweet, and share their purchases with their friends. In short, you can create a promotion in a tweet that people can add directly to their credit or debit cards, then redeem in real-time either online or offline. After the purchase, the money saved appears on their card in a few days—making it easy for you to attract new buyers and measure your ROI from Twitter campaigns. 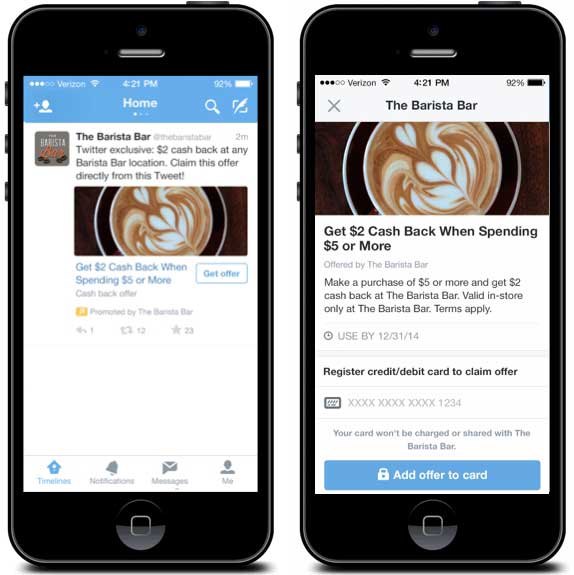 Tumblr goes for the 'Buy' button. And how! Buttons come directly from Etsy, Kickstarter, Artsy, and Do Something: When you post content from those sites, you'll automatically see action buttons in the top right corner of your post, encouraging people to "buy," "browse," "pledge," or "do something"—making Tumblr, now the fastest-growing social media property, that much more interesting for advertisers. More partner sites will likely join the program in the future. 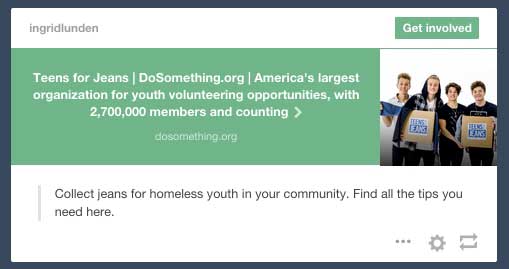 Using Snapchat for... brand RFPs? Hoping to make Snapchat more accessible while expressing their digital know-how, MRY's announced plans to accept RFPs via Snapcash, a new Snapchat digital payment feature (mentioned here). For one day only, brands could send MRY a short creative brief—for example, for logos, taglines, and other small jobs—as well as a charitable donation via Snapchat for Giving Tuesday. MRY snapped its proposals back accordingly. MRY hopes that even if the effort results in nothing big, it will give clients an opportunity to get more comfortable with the app, which seems to be an enigma for everyone who isn't a teenager or a college student. 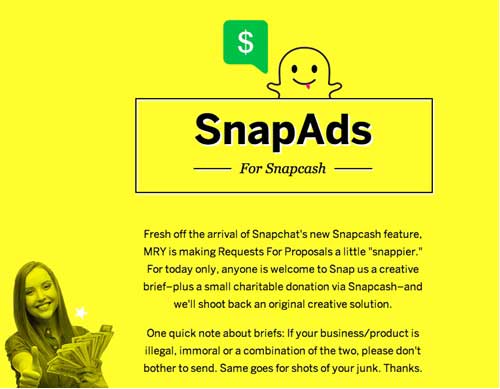 It's an Instagram advent calendar, brought to you by Asos. Under the handle asos_advent, each day Asos will post images using a hashtag that changes daily (#Instaadvent1 for day 1, #Instaadvent2 for day 2, etc.), and encourage people to post pictures with the hashtags in hopes of winning a voucher or other goodies. There's a new surprise each day!

We've got a Lomography Fisheye Baby 110 Camera up for grabs today. Upload or tag your Christmassy snaps using #Instadvent3 for a chance to win! Full Ts&Cs here: https://asos.do/GOFY7y

Twitter wants your app data. An update to its mobile app will allow Twitter to see what apps you've downloaded onto your phone, although it won't know what you do there: If you have YouTube, Twitter will see it, but it won't know what videos you watch. The microblogging site hopes to use the info it gathers to deliver more relevant promoted content and provide better follower suggestions. Data is automatically collected unless you choose to opt out.

We'll wrap with the glorious year in fandom. What did people go crazy for this year? Maker Gen partnered with Wikia to create Year in Fandom 2014, a video series that celebrates—and categorizes—the top moments of the year. There are six categories in all, including "Return to a Galaxy Far, Far Away," "Big Screen Battles," and "Level Up: The Next Evolution in Games." For each category, talent from Maker Gen showcased their favorite moments in creative ways, like this Lego Movie parody: