#SocialSkim: Facebook E-Shops, Plus 14 More Stories in This Week's Roundup

Learn how Facebook plans to own the entire consumer journey. (Yes, we'll talk about Moneypenny, too.) Also: tools that'll up your GIF game, create instant replays, and save Periscope videos; and why bloggers would rather work with you... not agencies. Skim to skip ahead in line!

Facebook's testing the ability to build online shops within Pages, some of which now feature "buy" buttons. Users will be able to complete a purchase without leaving the social network—which means it's got a shot at owning the full consumer journey, from discovery to checkout.

The 'Book won't share names of pilot brands, but the test shops currently number in the double-digits and are especially prominent on mobile... right beneath the standard toolbar and About sections.

As always, this is a great option for businesses, as long as they don't put all their eggs in this blue basket. You never know when the algos will change again. 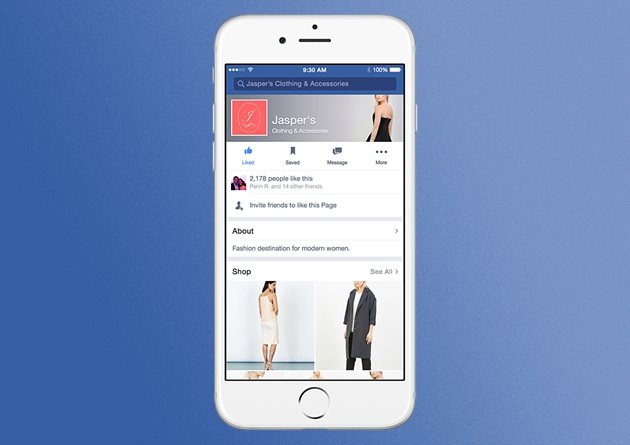 No, not the Bond girl. Facebook Messenger is creating a virtual digital assistant codenamed "Moneypenny." But, unlike Siri, which is productivity-focused, Moneypenny helps real people research and buy products and services.

Testing is taking place internally and it isn't yet clear when Moneypenny will go live. It's also possible that Facebook will hire a fleet of delivery drivers to manage shipping on its own (which also provides interesting insight on its plans for retail Brand Pages).

2. Say hello to PopKey for desktop

It's never been easier to GIF your heart out: PopKey, a GIF keyboard for mobile, is now available for desktop users. Forget Google; one PopKey quick search for anything from "happy" to "excited" will yield a plethora of animated pop culture expressions that you can quickly save and share across social networks. GIF on!

That's gotten easier, too. Slate lets you create animated text GIFs and save them to Imgur. You can also edit text, fonts, colors, GIF speed, and even add in emoji (please don't overdo it). Once the image is ready, grab the Imgur link and share away. You are now a GIF master.

4. Stop the presses! Social is a key news source

Curiously, though, 60% of users on both platforms say neither is an "important way I get news." This might be a reflection of what people interpret as worthwhile news consumption: Nobody wants to be the guy who gets news of world politics on Facebook, although everyone basically is. 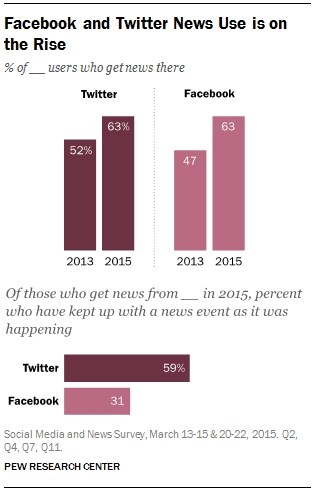 5. How to handle a #HashtagFail

BL Ochman provides seven tips on what to do if your hashtag campaign goes horribly wrong. In case you don't know what that looks like, she kicks off with examples, like #AskELJames, a hashtag soliciting Twitter questions for the author of 50 Shades of Grey. (Unforgettables included "What do you dislike more: Independent strong woman [sic] or the English language?")

A few tips: apologize immediately if you're wrong and outline how you plan to fix the problem; a sense of humor is crucial; don't ignore complaints; and, whatever you do, don't blame the intern (no one will believe you, says Ochman), and it perpetuates the idea that brands think of social as a low-level job. You don't want to be that guy.

6. Katch lets you save Periscope streams and make instant replays

Katch, which lets you save Meerkat videos to YouTube, now lets you save Periscope streams the same way. You can also download your videos, create instant replays, and up your privacy controls.

The method is simple: To save a video, add #Katch to its title and tweet it. If you'd like to archive all your videos, sign up for a Katch account and it'll do that automatically. Notably, Katch no longer hosts videos on YouTube; all content is natively hosted on its own site. 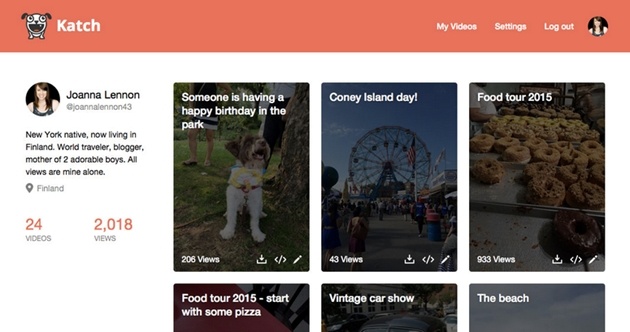 A GroupHigh report finds that 79% of bloggers surveyed want to work directly with brands, not agencies or networks—likely because that way their margins are higher and creative collaboration is simpler when it's direct, versus third-party. As for what potential partners (that's you) are most interested in, 87% of bloggers say they are asked for links to their social profiles and data on the size of their following, before starting partnerships.

To measure success with blogger collabos, marketers look at pageviews, 90% of bloggers say; 60% say social shares are important, too. Here's a breakdown people who pitch bloggers: 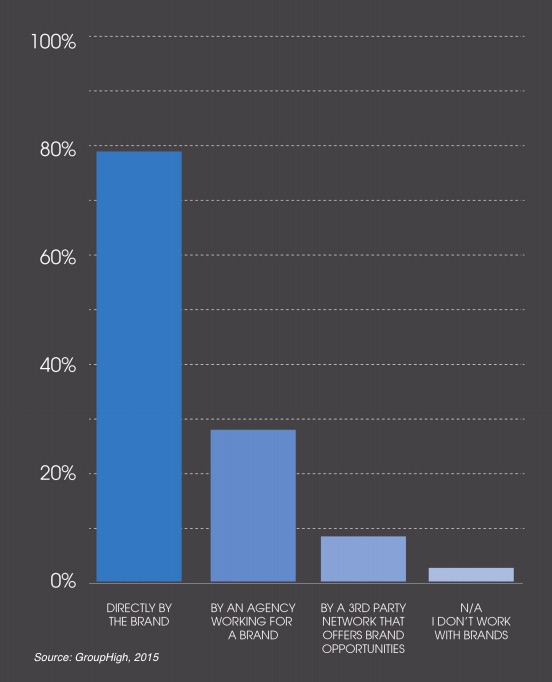 A combination of quick commodification, widespread adoption—possibly this holiday season—and low costs for advertisers and brands will make virtual reality a hotspot for marketing. Consider the possibilities: A VR-based e-store could be set up to look like a real store, with engagement features as well as a means of remotely ordering.

SapientNitro says it created a VR e-commerce demo for Cannes in six weeks for "low six figures." It worked just as well on Google Cardboard, one of the cheapest VR models you can get right now, as it did for the Samsung Gear, which it was built for.

Unilever is already preparing tests, and Gartner Group thinks that 25 million virtual or augmented reality headsets will be in the hands of consumers by 2018. Here's a Google Cardboard demo:

9. How to calculate optimal video length

This article breaks down what questions you should ask before defining the right length for your content. They include the type of content you're offering—because a TED talk can get away with being 15 minutes long, but something Vine-worthy obviously can't.

Visible Measures says you have 10 seconds to grab a viewer's attention; by the 30-second mark, you've already lost 33% of them. (We'd lower that attention limit to three seconds on sites that include autoplay, like Facebook, because that's how much time it takes for somebody to decide whether it's worth stopping... or scrolling on.) 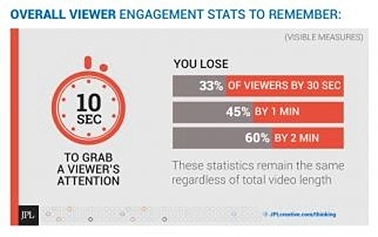 You've probably heard of a few: Nutshell is a short and sweet visual storytelling tool that we mentioned a couple of weeks ago. Candid lets you integrate customers' Instagram photos into your product pages. (Think of it as a sexier take on the testimonial.) And Plyfe lets you create quizzes, polls, and swiping features (à la Tinder) for content that merits more interaction. Dig in!

11. Where's your age group hanging out?

A Business Insider Intelligence report provides a super-handy visual breakdown of how all the major social networks look in terms of age.

Some 45% of Snapchat's population is 18-24 years old. If you want to talk to the 25-34-year-old market, Instagram and Pinterest have the largest ratio. Interestingly, for the two oldest demos—55-64 and 65+—Facebook and LinkedIn are pretty close, at 15% and 10%, and 16% and 9%, respectively. (Missing from this data is how big each socnet is with respect to the others. But no one needs to tell you that Facebook would quickly eat up that pie.) 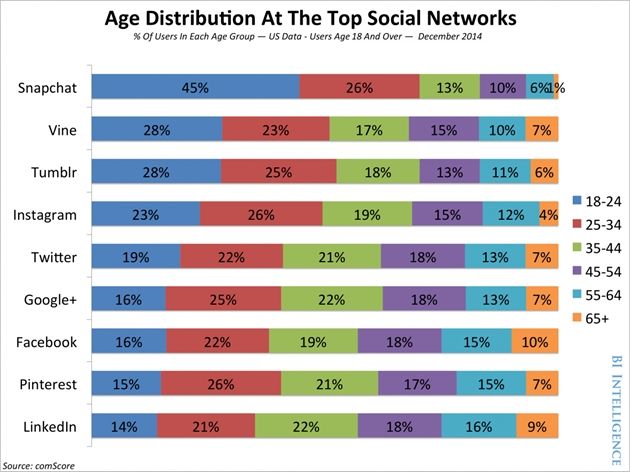 12. Why everyone's sick of Minions

Aggressive marketing for the Minions movie, coupled with the creatures' all-purpose weird-cuteness, has made Minions a pervasive tool for pushing everything from social values to Target graphic tees.

But a Brandwatch survey finds that 40.5% of tweets about Minions are negative, meaning there's a backlash brewing. Still, 59.5% are positive, and last Wednesday alone there were 222,000 mentions of the little yellow sidekicks.

So if you were planning some kind of weird yellow minion-related riff, don't wait too long... unless you're the kind of person who thinks all engagement is good engagement. (It may be for the movie, but for you, it may just look very late.)

This stupid Minions advertising has gone too far pic.twitter.com/hdVapBH5hB

13. Nix these 10 words from your LinkedIn profile

Are you motivated? Passionate? Creative? Awesome! So is everyone else on LinkedIn. Here's a breakdown of the most overused terms on the professional site, coupled with creative ways of showing (versus telling!) what you're capable of.

One way to stick out: Front-load your strength instead of hiding it behind a generic title. Instead of "Mary Smith: Software Engineer," why not "Mary Smith: Solving complex technical problems through code"?

14. We'll wrap with something inspirational

Always builds on its #LikeaGirl campaign with "Unstoppable," where girls young and old talk about the limitations that society imposes onto them. They're then encouraged to write those boundaries onto boxes, which they topple in all kinds of ways at the end. Think of it as a grittier, less surface-oriented take on Dove's Real Beauty work.

The video's generated over 30 million views since its publication less than two weeks ago—making it one of the top global ads of this period.

Studies show that Millennial buyers care overwhelmingly about a brand's values and contributions to a community.

With work like this, Always is a far cry from its blue-fluid days; it's joined a battle call to raise the value of girls everywhere. What can you bring to the cultural table?