#SocialSkim: More Ways to Sell Directly on Twitter, Plus 10 More Stories in This Week's Roundup

Twitter's Buy Now button is hitting the big leagues! The site's entered into some new partnerships that make it easier for businesses to punt products via tweet: Bigcommerce, Demandware, and Shopify are now part of the program, as well as retail partnerships powered by Stripe Relay for Best Buy, Adidas, and PacSun.

"With Buy Now, businesses can drive more conversions and remove much of the friction in the mobile purchasing process," Twitter writes. Sounds like a good day for joining hands with a new e-commerce platform partner.

1. Also, get ready for long-form Tweets

Twitter's allegedly working on a way to let users share tweets that are longer than 140 characters, which is odd for two reasons: Brevity sets it apart (and drives people—and brands—straight to the point), and it's already got a long-form platform called Medium, which, following a recent $57 million funding round, is now worth $400 million (so it ain't doing too bad). Twitter already lets people send direct messages longer than 140 characters, so it's possible the whole platform's moving in this direction. Sigh. Don't tell Marketing and Legal yet.

First], there's TRP: The "total rating point" buying system lets marketers "plan a campaign across TV and Facebook with a total TRP target in mind, and they can buy a share of those TRPs directly with Facebook." Nielsen's Digital Ad Ratings will verify Facebook's TRP delivery, and its Total Ad Ratings system will verify TRP delivery for both Facebook and television.

Then there's brand awareness optimization, which lets advertisers target those most likely to recall their ads based on attention and reach. Find it when you buy from the Ads auction, or through the Reach and Frequency tool in Power Editor, beginning this October, and rolling out fully in the months to come.

Next, mobile polling now lets you conduct mobile polls on Facebook or Instagram to gauge campaign effectiveness (see image that follows). Talk to a sales rep for more details. 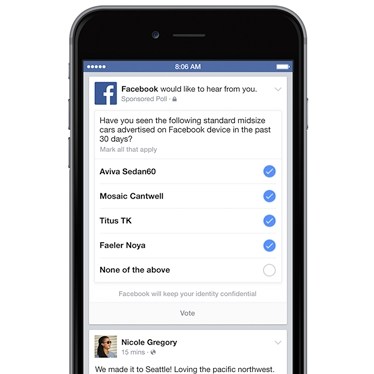 Finally, there's the inclusion of videos in its carousel format, creating room for "more compelling storytelling." Extra plus: The 'Book says this format costs less per click and conversion than single-photo formats. Also, videos generate the most engagement (though interactions are declining as the volume of videos rises).

The Millennial generation's Big Blue is improving profiles with some grabby features, including...

The new features will roll out to a few iPhone users in the UK and California first, and it isn't yet clear how Brand Pages will be affected. But whatever changes remain will likely appear on Pages soon after, if Facebook follows its usual pace. Time to start working on your production chops.

4. YouTube's got another subscription service in the works!

The site's updating its TOS, asking creators to agree to make their videos available on an upcoming paid subscription. Per an email sent to Re/Code: "If you haven't signed by (October 22), your videos will no longer be available for public display or monetization in the United States. That outcome would be a loss for YouTube, a loss for the thriving presence you've built on the platform, and above all, a loss for your fans."

The platform will probably let users watch videos without seeing ads (as long as they pay), and will likely also affect YouTube's current Music service.

Digital marketing and media have been in a panic over the rise of AdBlock, but those who have it installed were surprised by an announcement yesterday (see image that follows when they tried opening a new tab: AdBlock's joined the Acceptable Ads program, the guidelines of which identify "non-annoying" ads that AdBlock will now show by default. As long as your ads are relevant, entertaining, and well-considered, they'll make it past the filter. 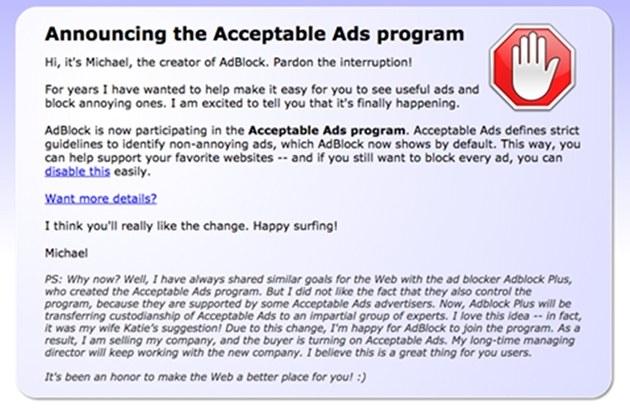 However, users can disable the feature if those "non-annoying" ads actually do get annoying. Or if they just don't care that businesses are losing money (which we think is mostly the result of bad advertising, so spruce up!)

To find out how to create brand content people want to see, check out this handy-dandy presentation by Grégory Pouy, where, among other things, you'll learn that 90% of information is processed through visuals. Make it count.

Some 93% of 18-34-yearolds surveyed by the Media Insight Project regularly use paid content, and 87% personally paid for those services (think Netflix, Candy Crush, or iTunes downloads); 40% have personally paid for a news product or service, with older Millennials more likely to pay for news than younger ones.

People who pay for news are more likely than non-payers to follow sports (56% vs. 44%), current events (51% vs. 38%), and engage more with news on platforms such as Twitter and Facebook. There is no major economic difference between payers and non-payers. 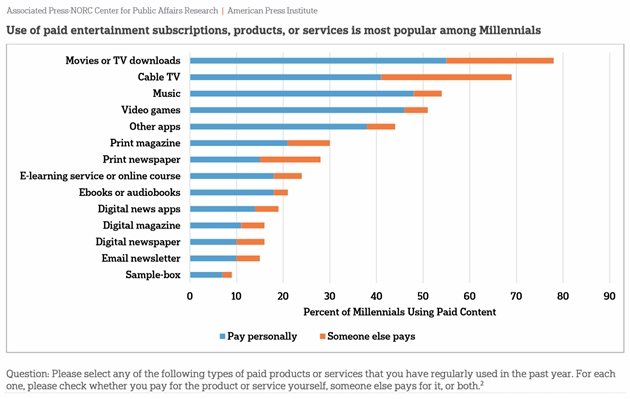 So if you've got a clever developer on your team, pass this article his or her way. For brands, getting aboard is lucrative: Polyvore, which worked with Pinterest for one of its first integrations, had traffic rise 35% while Pins saved rose tenfold. 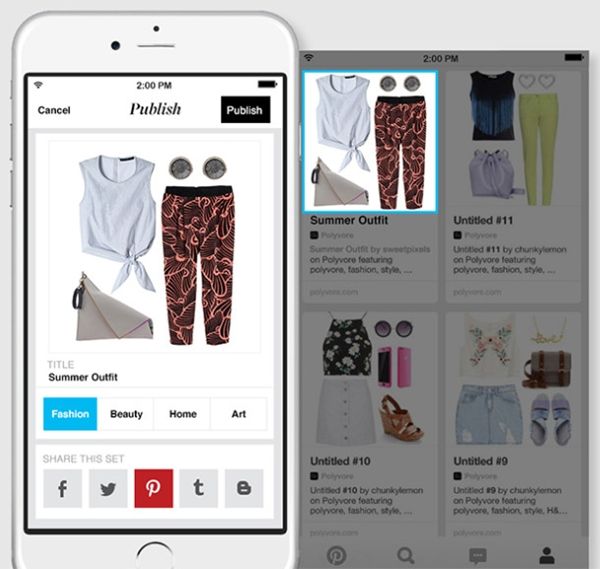 8. A daily, weekly, and monthly checklist for social media masters

It's right here , complete with tools to make social tasks more efficient. Examples: daily tasks include scheduling updates for tomorrow and checking mentions; weekly tasks, checking your stats and weekly goals; and monthly, performing a social media audit and planning for next month.

One cool tool mentioned, and which we use to stay on-point, is Nuzzel, which creates a feed made up of articles that people on your Twitter and Facebook feeds are sharing now most often. And for updating on different networks, remember: 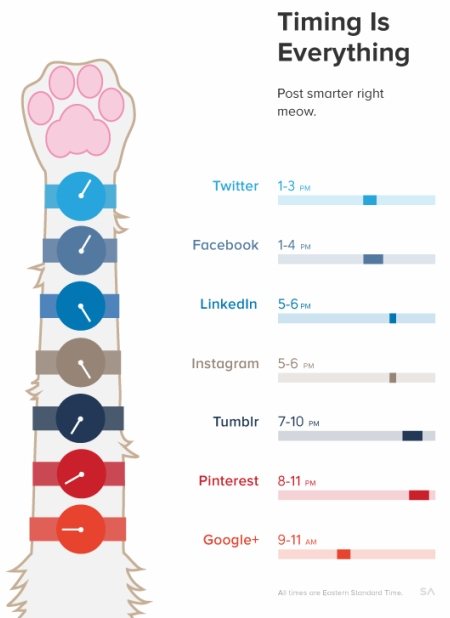 9. Do people use social media during the holidays?

Marketers often think not, so Christopher Penn checked the data. The short answer: Yes. Christmas Day scores lots of engagement—and though Thanksgiving-day engagement is low, most of the fourth quarter is, too, so the problem isn't the event so much as the time of year.

Buying intent does decrease, but it's still there—"in the thousands rather than the millions" (see chart, below).

Penn's verdict: Feel free to post and market during these periods, as long as it's worth reading and discussing. The people will come. 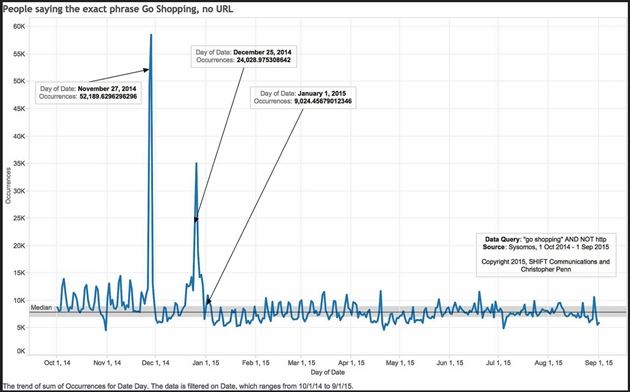 For the launch of "The Peanuts Movie," Fox Family created Peanutize Me!, which lets users transform themselves into Peanuts-style characters, then share those images on social networks. (It's pretty awesome, for old Charlie Brown fans and new ones alike.)

But as often happens when something explodes like this, someone—in this case, TV podcaster Grant Davis—took the concept and transformed it into something that hits all kinds of new pop culture buttons.

Check out his Peanuts treatment of various beloved TV shows, including Breaking Bad, The X-Files, and 30 Rock. Below, see Seinfeld in ways you never have before.

This is a cool example of how a successful marketing push can be embraced and adapted—to reference, and even augment, other brands. Because unlike companies, people don't always take sides. 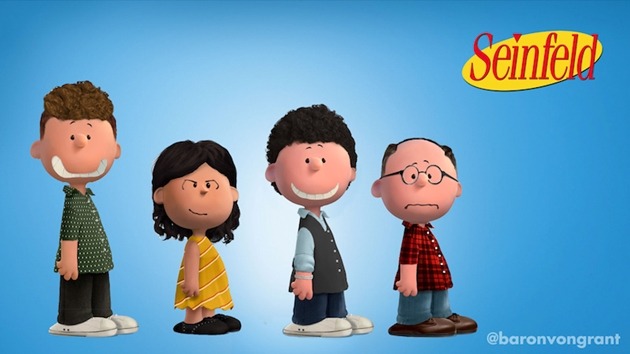