#SocialSkim: How Twitter's New Algorithm Works, Plus 10 More Stories in This Week's Roundup

We come bearing good tidings! Instagram officially launched multi-account support. Also: How does Twitter's new timeline actually work, and how do you activate it? And find out which platform outshone Facebook and Twitter as brands' favorite for the Super Bowl. Skim for the latest in social touchdowns.

And it's powered by an algorithm. The change is temporarily opt-in, but it's been surrounded by outrage in the Twittersphere following a BuzzFeed report claiming the platform would abandon its signature real-time approach for an algorithm that would serve more "relevant" content (like Facebook does). Unfortunately for those users, Twitter's in a state of turmoil, and pressure from Wall Street means the company has to adapt.

The new "show me the best tweets first" feature can be switched on in account settings. Once it's enabled, users will see a chunk of non-chronological tweets at the top of their timelines each time they launch the app or open the website, but a refresh will remove the non-chronological items and replace it with the timeline you already know so well.

Twitter cites increased engagement with content due to the new feature, which could give marketers a reason to be (cautiously) optimistic. Check it out for yourselves and tell us what you think in the comments below.

Starting today you can choose to try our new feature, so you'll never miss important Tweets from people you follow: https://t.co/fS1axkDiUh

1. Not a coincidence: Twitter introduces an autoplay video ad unit

The new ad format is video-only for now and lets marketers grab the top ad spot on timelines for a 24-hour period when users first launch the app. The premium "First View" offering is likely an effort to increase Twitter's revenue per user. It will first be rolled out to select US clients before expanding worldwide.

Brand managers and digital marketers rejoice—and give your thumbs a rest this week! Last week we let you know the photo-sharing platform was testing the feature, and this week it officially rolled out for all users. Here's how to add up to five accounts, but be sure to update to version 7.15 of the app first:

Amazon tapped social media star David Lopez to "hang out" with Alexa, the company's voice-controlled Echo technology, in a series of snaps showing off the product in amusing ways. Gatorade opted for a custom filter of the infamous post-game Gatorade shower, starring tennis star Serena Williams. Even GE got in on the action, buying inventory on ESPN's Discovery channel to promote its smart barbecue equipment for tailgating.

Snapchat may have upped its game this year, but there was significantly decreased chatter on Facebook and Twitter, despite Facebook's new Sports Stadium and Twitter's new Moments feature, which aggregated post-game highlights. Click through to enjoy all seven Snapchat campaigns in depth, and note that not all required expensive influencers, custom filters, or even national buys (great news for brands that don't have $5 million to drop on a :30 spot).

4. Google is breaking up with Flash ads

Adobe's Flash multimedia software has long been plagued by security vulnerabilities, which may be one reason why Google's decided to accept only ads written in HTML5. The search giant will officially stop accepting Flash-based display ads for AdWords and DoubleClick Digital Marketing on June 30 this year, and Flash won't be allowed on Google's Display Network or DoubleClick after January 2, 2017. Prepare yourselves!

Although smartphones are becoming the go-to device to buy products and services, most consumers are dissatisfied with the mobile experience, a study commissioned by Facebook IQ finds.

A full 45% of shopping journeys involve a mobile device, yet about 70% say the Web, app, and transaction experiences could be improved. Along with the other eye-opening stats below, the study can help you better understand which aspects of your mobile experience are most important to customers, and where you could improve. Bon appétit! 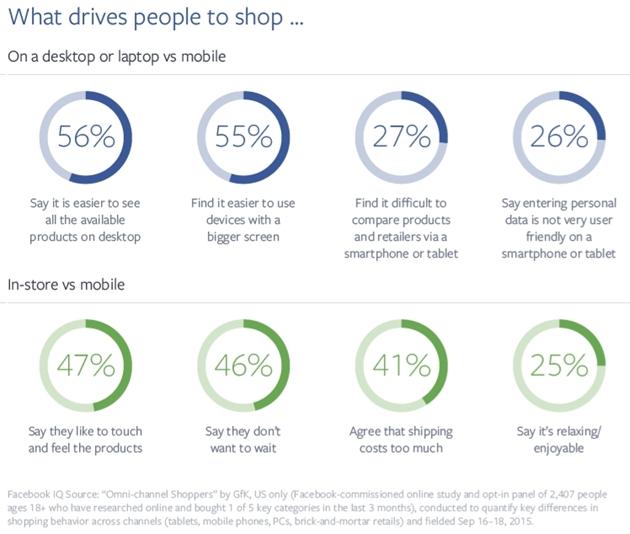 6. Running lead-generation ads on Facebook? Here's when to do it...

According to Facebook Marketing Partner and advertising software provider Nanigans, brands would be smart to engage users in the first half of the week, when spending and conversions are at their highest.

The study also notes that the lead generating ad sector is relying more on mobile, accounting for 80% of inventory in the category. Expect more of this as B2B brands realize the importance of social shopping, and check out Facebook's beefed-up lead ads if you need a refresher.

7. Ad tech trying to calculate the ROI of emojis

It's far from an exact science, but some companies are working to put a value on emoji campaigns, like those run by Ford on Facebook and Coca-Cola on Twitter. Typical display and video campaigns come with fleshed-out tech that can gauge sales and brand lift with ease. Emojis prove more difficult, but that could change as technology advances.

Companies like Swyft Media, a virtual keyboard maker that specializes in emojis and GIFs, says advertisers can gather basic metrics like downloads, shares, impressions, but also the ability to retarget emoji campaigns based on previous interest.

Some agency veterans remain skeptical, saying emojis are a good tool for general branding, but not for driving traffic in-store.

Facebook will command 73.4% of social network ad spend in 2016, and the company will reach another major milestone this year when over half of the American population (50.3%) logs onto the platform at least once per month, eMarketer projects.

That level is expected to reach 53.1% by 2020, leaving it with a commanding grip on total social ad spend, with Instagram and Twitter lagging behind with 34.8% and 21.1% penetration rates, respectively, and Pinterest and Tumblr rounding out the top 5 platforms. 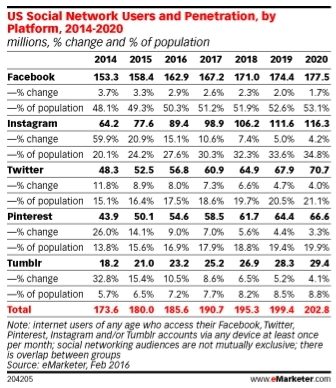 9. Boost your reach on Twitter with these seven easy, free tactics

Even with Twitter's new algorithm update, most tweets will still be arranged in real-time, meaning your message could fall on deaf ears if not published when people are looking. Luckily, we've got seven super easy ways to spread your message more broadly.

10. We'll wrap with a reminder about plagiarism in the digital world

French YouTube sensation Mathieu Richard was the target of outrage this week when people discovered he blatantly plagiarized creative videos of other, non-French YouTube stars like American Motoki Maxted. The controversy grew so large that Richard executed a French media blitz, where he defended himself but also acknowledged fault.

This serves as a good reminder for all of us using content marketing to drive engagement: It's easy to appropriate other creative ideas and concepts that are gaining lots of traction, but the lines are thin between learning from pros, paying homage, and flagrantly stealing the storytelling. The Content Marketing Institute has a great piece on how to use content that didn't originate with you—whether that means taking the 100% legal route with resources like Creative Commons, or getting an informal OK via social channels. (Alternatively, you can always directly contract the work's originator or openly cite them as inspiration. Even if you follow the latter route, remember to work on making an idea yours versus using another one wholesale.) Watch how these constraints evolve, and remember to respect fellow creators!