#SocialSkim: Snapchat Gets Serious About Advertising, Plus 11 More Stories in This Week's Roundup

This week's all about ads, ads, and more ads. Major players, including Facebook, Pinterest, and Instagram, introduced new ad products, and Snapchat debuted its ad application programming interface (API), which will for the first time allow businesses purchase ads on the platform via third parties.

We'll also discuss Microsoft's acquisition of LinkedIn, let you know what social network just pulled ahead of Twitter in popularity for advertisers, and dive into Facebook's struggle to stop criminals and terrorists from livestreaming their crimes. Skim to stay smart!

It may have just wrapped up its latest $1.8 billion funding round, but the ephemeral-messaging app apparently can't slow its roll. Snapchat just announced the launch of its advertising application programming interface, dubbed Snapchat Partners, through which it will sell 10-second ads on its platform via third parties for the first time ever.

The Partners are split between Ads Partners and Creative Partners—the former developing software to let advertisers buy inventory on the network, and optimizing and analyzing campaigns, and the latter providing expertise in social content.

The latest changes also have the company placing ads between user-generated Stories.

Do you think Snapchat's latest move will see the platform overrun by marketers?

1. Pinterest adds site and app retargeting to its arsenal

Advertisers are now able to target ads at Pinterest users who've visited their brand's sites—a powerful tool that enables marketers to place Pinterest conversion tags across their websites that let them follow viewers onto Pinterest and better target their ads.

In all, the additions should help your brand get your Pinterest content in front of the eyes of a more qualified audience, and hopefully convert those users into customers.

2. She said yes! LinkedIn to Microsoft, that is...

And for a cool $26.2 billion. The business-focused social network for professionals has enjoyed major growth in China, but concerns have been mounting over its inactive user base (i.e., only 25% of them use it monthly).

It's Microsoft's biggest acquisition to date, and it's bound to give the tech behemoth all sorts of new insights about you and your professional connections. LinkedIn is expected to guard its distinct brand and independence through the acquisition. Oh, by the way, it's an all-cash deal. Who has that kind of dough laying around? Microsoft, apparently.

Store locator lets users quickly access maps and contact information (see image, below), while store visits provide retailers with info regarding the number of people who viewed local awareness ads and then visited their stores. The final addition, the offline conversions API, helps retailers measure the impact of Facebook marketing campaigns on their in-store transactions, call-center transactions, and more! 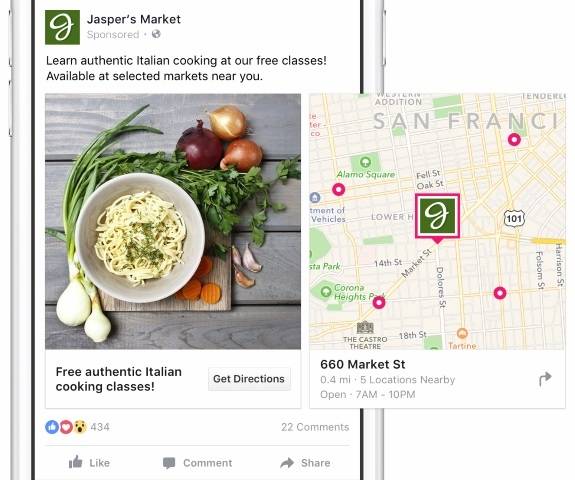 4. Facebook VP predicts News Feed will be all video in five years

Pointing to year-on-year declines in user text posts on the social network, Facebook's VP for Europe, the Middle East and Africa told the audience at a Fortune Magazine summit that our News Feeds will "probably be all video" in five years.

The Facebook executive also said the network's new 360-degree videos will soon feel commonplace for users, and says that videos in general help users tell better stories and often help communicate a greater amount of information in a shorter amount of time.

Not everyone agrees that text will die any time soon. Ann Handley certainly doesn't.

Nevertheless, we suggest it's time your brand had a solid video production team in place—even if only for your Facebook presence.

A new survey reveals that, for the first time ever, advertising agencies are leaving behind Twitter's newly expanded 140-characters and turning to Instagram more often for social media campaigns.

The revelation ushers in more bad news for Twitter: Its ongoing struggle with stagnant user growth amid rising competition from the likes of faster-growing Snapchat has only been exacerbated by management shakeups and declining investor confidence.

In an effort to bring any holdouts to Facebook's chat platform, the social network introduced an opt-in way for Android users to view and send traditional SMS messages directly from Facebook Messenger.

SMS within Messenger will support images, video, stickers, emoji, and location sharing, but those looking to send money, use GIFs, make video calls, or hail an Uber via the platform will have to do so within actual Messenger threads, which will remain blue. SMS messages will appear in purple.

Unfortunately, Apple's policies barring developers from the same type of freedoms mean there are no plans to bring such a service to iOS users. 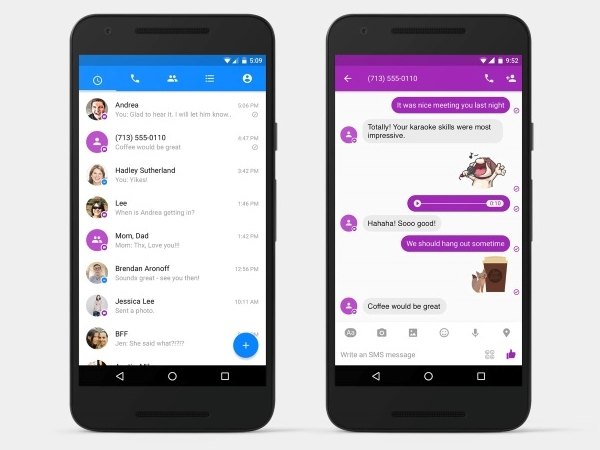 The Facebook-owned photo-sharing app is rolling out a direct-response feature internationally that links ads to profile pages. Users will see a call-to-action banner ad at the bottom of their screen when they click an ad that appears in their news feed.

Clicking on the banner will open a website within Instagram itself, hopefully driving users through the purchasing funnel. See below for a clearer picture! 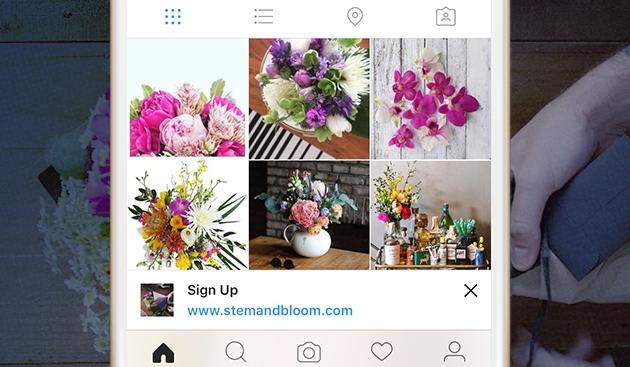 The videos, which depict users unwrapping and diving into new products so their followers can catch a glimpse, became an institution on YouTube, but they now appear set to take on a new platform: Snapchat.

With the ephemeral-messaging app all about showing behind-the-scenes sneak peeks, and unboxing videos serving just that purpose, brands like GQ and Benefits Cosmetics are trying to capitalize on the video format's popularity while digging into the younger demographic that Snapchat has to offer.

Now it's just about finding the right influencers to open those packages... 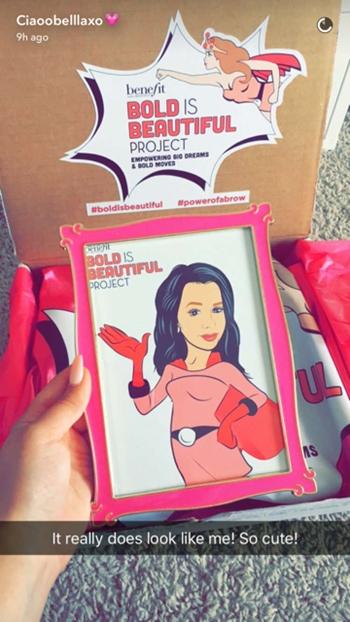 9. Facebook brings 360-degree photos to News Feeds near you

The new photo format can also be seen with virtual reality devices and marks a new addition to the network's goal of creating a "social VR" experience that allows users to share real experiences with their networks.

Men and women, Millennials and Baby Boomers: Who shares what on social, and how often?

Dive into the numbers and hone in on your target audience to help optimize the content you're producing to receive the best results. MarketingProfs takes a look at a Fractl infographic that explains it all! 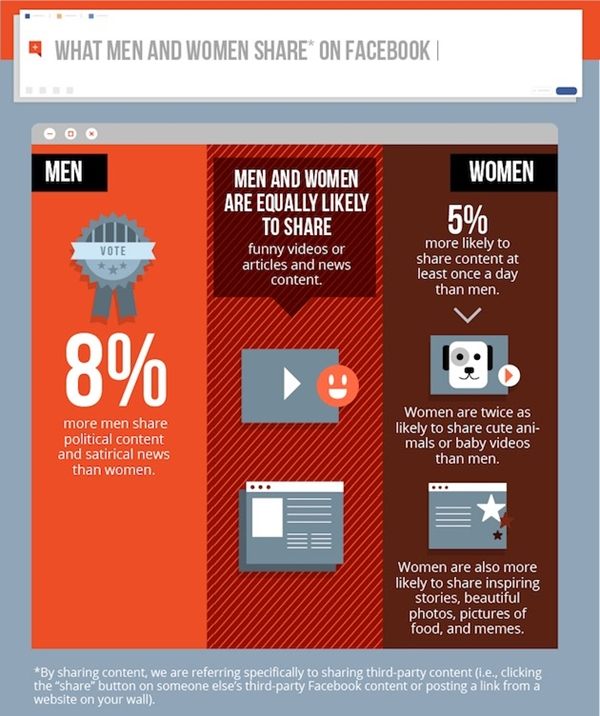 11. We'll wrap with Facebook's struggle to stop crimes from being live-streamed

Even as the world mourned the loss of 49 lives in the Orlando nightclub attack this week, a northwestern suburb of Paris became the latest example of social networks' struggle to stop criminal and terrorist activities from going live across their networks.

A French Islamist extremist livestreamed the aftermath of his deadly stabbing of a French police officer and the officer's wife on Monday, sparking Facebook to work with French authorities on the case and bringing into question the ability of social platforms to stop the dissemination of livestreamed crimes.

Facebook and Periscope, two major live streaming players, have teams that monitor activity, but they mostly depend on users to flag inappropriate publications. That can be a problem when anyone can pick up a smartphone and livestream with ease.

As the live format increases in popularity, we'll likely see new debates on how companies can regulate the content that's airing directly on the screens of billions of users.