This week's 'Skim: How brands can switch up their social strategy in the wake of Facebook's big algorithm change; WhatsApp officially launches its business-friendly app in six markets; just how angry Snapchat users are about the app's redesign; Facebook's plans to become more local, and to declutter Messenger in 2018; why micro-influencers could be a goldmine for your business; Facebook introduces interactive Watch Parties; top marketing tips for livestream videos; and much more...

Skim to stay with the pack!

1. Here's how marketers can adjust their Facebook strategy in wake of the algorithm shakeup

Last week Facebook announced its most disruptive algorithm change in years, deciding it would send less traffic to publishers' content and instead prioritize content that users' friends and family engages with. For brand pages and publishers, that likely means plummeting organic reach numbers, and probably higher advertising costs.

So how can you prepare for the inevitable shift?

If you want to maintain your reach, the change probably means spending more money on ads, which isn't a surprise, considering that Facebook's ad rates have climbed 35% in just the last quarter.

It also means training your digital team to not only execute campaigns and push buttons as before but also constantly optimize and deliver quality content, especially as Facebook continues its witch hunt for "engagement bait".

A bright side to all this? Facebook will likely find new ways for brands to engage with users, just not in the News Feed. It might pull a WeChat and give brands new access to Messenger, all while holding fast to its insistence that Facebook isn't a media company. Prepare yourselves for the apocalypse.

Marketers in Indonesia, Italy, Mexico, the UK, and the US were last week treated to an official release of the WhatsApp Business App, before the Facebook owned platform makes itself available worldwide.

The free app is currently Android-only, but it will serve as WhatsApp's path to new revenue streams when it starts charging large businesses for advanced ways to reach consumers.

For now, though, the app is positioned as a free way for small brands to build an official presence on the platform and take advantage of new tools, such as quick replies, greeting messages, away messages, and more. 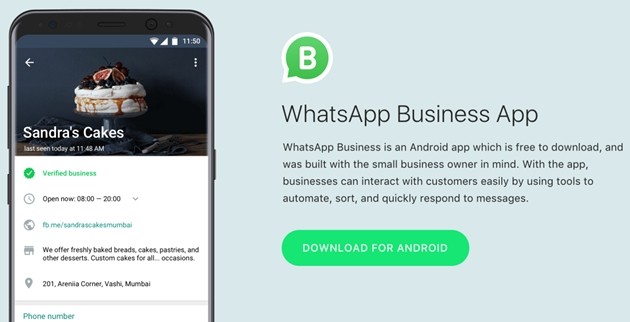 3. It turns out Snapchat users hate its redesign

It didn't take long after Snap Inc. rolled out a redesigned Snapchat for users to bash it en masse.

In fact, 83% of user reviews on the App Store are negative, with many active Snapchatters complaining that the app no longer makes sense as their feeds no longer present snaps in chronological order.

Probably an a gesture to prove the app's attractiveness to investors on Wall Street, Snapchat also decided to mix a higher number of advertisements into users' feeds with the facelift. The social network anticipated the redesign would be disruptive to the business, but it's confident that the changes will "settle in" and business will carry on as usual... eventually.

4. Facebook aims to be more local with news section aimed at communities

The social network is hoping to make your community a little more accessible with the test of a new section that brings city-specific events, local news, and announcements to users.

Dubbed "Today In," the machine-learning tool will help a Facebook team deliver local content to six American cities—New Orleans, Little Rock, Billings, Peoria, Olympia, and Binghamton—and provide users in those towns a new way to connect with their neighbors and to access news through approved Facebook local news publishers.

The test was born out of Facebook's Journalism Project, which vowed to curb the spread of fake news on the platform. 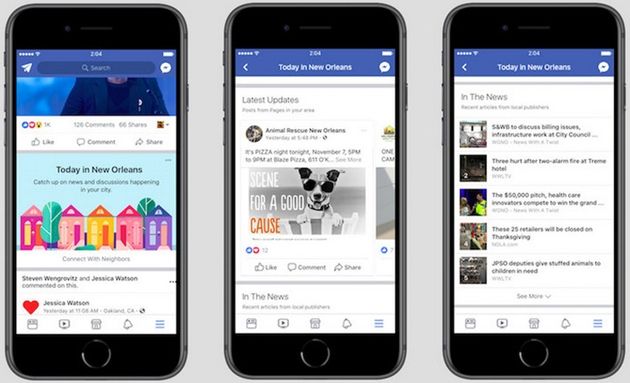 5. Micro-influencers are getting lots of attention, and here's why you can't miss out

Sure, the influencer you hired to review and relay your brand's name might have garnered a million impressions and 300,000 video views, but how many of those were bought and paid for bots, and how engaging did the operation prove?

With engagement rates for influencers who have more than 5,000 followers racing downward to 3.3% compared with the 9.6% earned by influencers with fewer followers, brands are taking a serious look at micro-influencers. And rightly so. Social media marketers are increasingly seeing the value in engagement rather than pure reach. Targeting hyper-specific audiences is proving key to effective marketing in more ways than one.

Forbes shows us how getting consumers involved with your efforts, finding influencers with rich, niche followers, and finding new ways for consumers to create UGC are all ways brands can stop overpaying for impressions and instead focus on building better brand experiences.

See more about influencer trends, including for the year that was and the year ahead.

6. Facebook aims to remove clutter from Messenger for better UX in 2018

Users who think Facebook Messenger has become a bloated platform with lots of extra gadgets might soon be singing a different tune. Facebook's head of Messenger last week posted a plan of goals for 2018 that included making the platform a more simplified, streamlined experience.

Despite the promise, Messenger is expected to receive some new features, including some form of real-time communication tool similar to Facebook Live, and improvements to the visual abilities of the platform, such as emojis, and live video chat, all while making the app more suitable for customer care and support.

Will Messenger's promise to slim down hold true throughout the year? We're not so sure, considering that ambitious agenda.

eMarketer has released its latest statistics on the state of social media around the world, figures that would shock if you went back just a short while ago and took a look at the online ecosystem of 2004.

Some 2.48 billion people—or one in three humans on the planet—used a social network in 2017, and 82.5% of them used a mobile device at least once to access them. The massive growth in 2017 is much in thanks to emerging markets, including in the Asia/Pacific, the Middle East, Africa, and Latin America.

Facebook still holds the No. 1 spot, with 1.54 billion users, but Facebook's Instagram has made headway and now counts 594 million users among its ranks. Wow.

Facebook is constantly trying to find new ways to engage users with video, and the next endeavor might come in the form of co-viewing from afar, with other Facebook users. The social behemoth is testing a new feature called Watch Party that lets users in groups view videos together, as well as react and comment in real-time.

Facebook's motivation for such a test could be that Facebook Live videos enjoy six times higher rates of interaction than regular videos, as well as the potential for monetization down the road when Watch Parties could be, for example, hosted by influencers paid for by businesses.

Facebook's goal continues to be encouraging interaction over passive consumption, and Watch Parties seem to deliver just that. 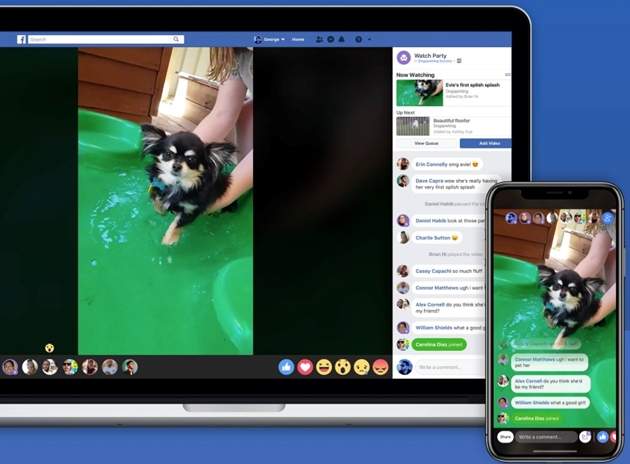 If the market for livestream video is any indication, marketers who perhaps didn't pay much attention to it in 2017 might finally want to take note: The livestreaming industry is expected to reach $70.05 billion by 2021.

Encouraged by the fact that Facebook Live videos view times are three times longer than for nonlive videos, more companies are hopping on board. But which livestream platform should you invest in?

Filmora has the answers in an infographic built to answer that question. Covered in detail: which audiences brands can reach on what platform, what type of content users are watching live, the benefits of livestream video, how brands can make good use of it themselves, and much more! 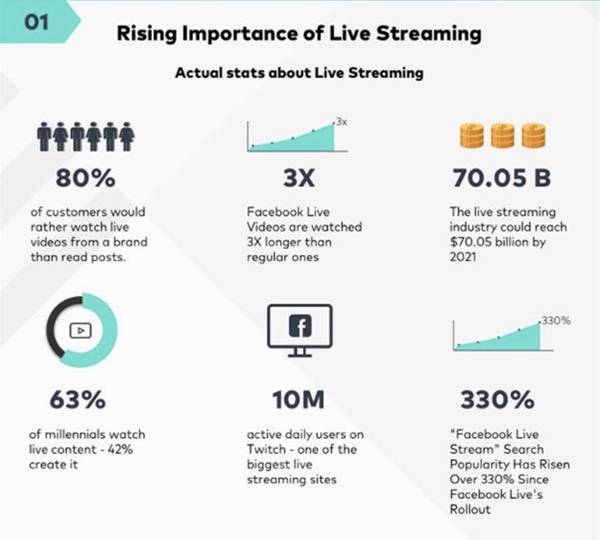 CVS Pharmacy, the primary retail consumers of which are women, nabbed headlines on social media last week in a big way when it announced it would no longer touch up images of people used in advertising materials for beauty products.

That means no more altering the shape, size, skin tone, eye color, or wrinkles of models, and that includes of images posted in stores, on websites, and on social media.

CVS Health Corp. cited dangers to the mental health of young girls and women as a motive for the change, and said any touched up images will carry a label to indicate the alterations.

Needless to say, the social interwebs were overwhelmingly pleased with the announcement.