What an Online Hater Really Wants From You

The near-universal adoption of smartphones and social media has fundamentally altered the science of complaints. Critics ("haters") can now express their displeasure faster and more publicly than ever.

But haters are not your problem... Ignoring them is.

There are no meaningful differences in educational level or annual income between online hater types. There are also no gender differences of note between onstage and offstage haters.

However, across all channels combined, men complain more often: 22% of men have complained to a business seven times or more in the past year, compared with 16% of women, our research found.

Age Has a Significant Impact on How and Where People Complain

More than 90% of American complainers in nearly every age category have complained offstage via phone or email.

Among onstage haters, young people are far more likely to have complained via social media, discussion boards, forums, and online review sites than have older consumers. More than 80% of 25-34-year-olds have complained publicly, compared with 58% of survey respondents age 65 or older. 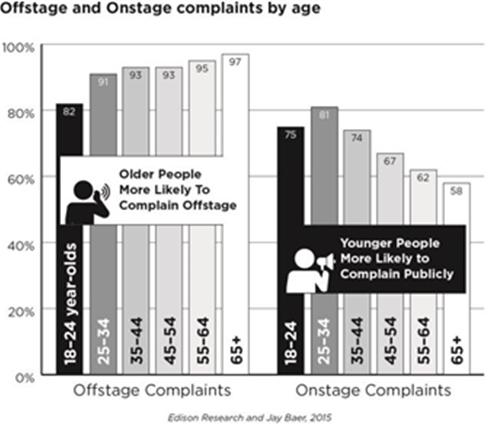 The 'Look at Me' Ethos

Facebook is a favorite haven of onstage haters. But when examining the relationship between channels and complaints, I begin to wonder whether Facebook's pervasiveness, ease of use, and "look at me" ethos is disproportionately fueling onstage haters. After all, you have to create status updates about something, and "I've been wronged by this company" is a good way to solicit interactions from friends and digital acquaintances. 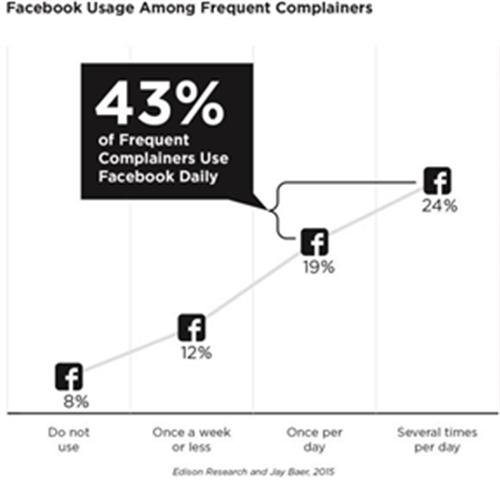 That dynamic is even more pronounced with Twitter, although the total number of users is smaller: 70% of heavy complainers have a Twitter account, but nearly one-third of the respondents who use Twitter several times per day are frequent complainers. 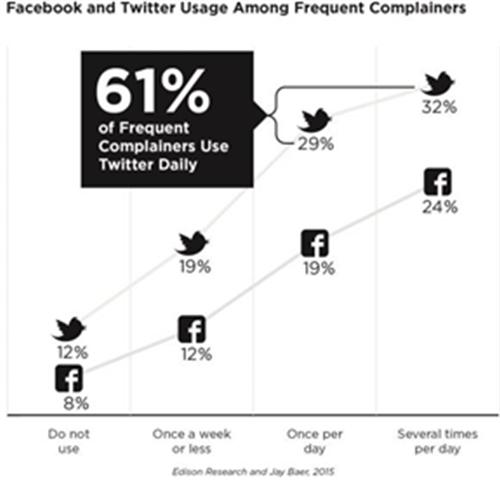 Considering the proliferation of social media and social networks, that dynamic isn't going to change any time soon, if ever.

Do Online Haters Want an Answer, or Do They Want an Audience?

Social media is facilitating complaints and breeding onstage haters. But the issues that are communicated in social media, review websites, discussion boards, and online forums are sometimes more frivolous than those in telephone or email interactions. Especially in social media, consumers often post quick missives without much depth.

Mason Nelder, formerly director of central insights and social business at Verizon, sees this difference every day: "Typically, the people who send email have, I think, much more meaning behind what they're writing, because it's long-form. In social media, because it's short-form, it's much more emotional. It's almost like, if they took time to think about it and actually write about it appropriately, it might not be as emotionally charged."

What we categorize as a "complaint" in social media (in particular) isn't a "complaint" in the same sense that a well-crafted email or a telephone call is a "complaint." Instead, these short, social missives are often simply expressions of the current situation. And among heavy social media users, any customer experience falling short of perfect is legitimate grounds to instantly admonish the business.

In the same way that bumper stickers are the most shallow form of political expression, social media grousing is the thinnest form of customer complaints.

Our research found that when people complain in private, they almost always expect a response from the business or company. Yet, when complaining in public, onstage haters expect a response roughly half the time or less. That ratio varies by channel.

Richard Binhammer agrees, recalling his time at Dell: "Often, even when customers are being difficult in public, they're just calling you out to get your attention. And once they've got your attention they actually turn around and can become good customers."

Only Half of Online Haters Actually Want Help

This characteristic of onstage haters is also evident in other countries. A survey of 2,000 online complaints in the Netherlands in 2013 by TNS found 30% were venting negative feelings, and 23% were seeking vengeance. Only 48% wanted help.

Alan Moir, my friend from high school and college, is disproportionately concerned about beverage temperature. He is fond of saying—without irony―"there's no such thing as too much ice." That's perhaps an unexpected thing to obsess over for a Canadian, since the "drinks must be as cold as possible" notion is an American construct.

Yet, a person like Alan can quite easily use social media to proclaim, "Hey, Le Pain Quotidien! How about some more ice in the lemonade"—while continuing to drink that same lukewarm beverage. He can express his displeasure in an instant, at no personal cost. He may even be able to interact with the brand (which can be a bit of thrill) or, at the very least, put it out there for his friends in social media to react to alongside him.

In his book The Squeaky Wheel, Guy Winch explains why we do this: "When we complain, we hope to purge the frustration, anger, or irritation that is generated by our dissatisfaction. Indeed, the expression getting it off our chest refers to the palpable lightness, the cathartic easing of internal tension, we hope to experience by speaking up about a troubling complaint. But what creates the catharsis is not the voicing of our complaints aloud, but rather voicing them to another person."

It's much easier to get it off our chest online that it is offline. Would my friend Alan take the time to telephone about that issue? No. Would he sit down at a computer and write out an entire email? No. The platform used to voice the complaint usually fits the nature of the "crime" against the consumer. The bigger the issue, the more likely it is that contact will be through private, offstage channels.

But that's true of the first complaint only. If an issue requires more than one contact to satisfactorily solve, a much different scenario can occur.

Even though the tragedy of a beverage-specific ice shortage isn't cause for a move to DEFCON 4, the business in question still has to deal with it, because it's now in the public domain. If you don't answer that complaint, the potential to make a customer advocate of that complainer is diminished, and anyone looking on might also become frustrated by and disappointed in your lack of attention.

A lot of what we call complaints delivered online and in public would be classified as a mere comment if delivered offline, assuming they would be delivered at all. Annoyances that formerly would have qualified for an inner monologue of "oh, that sucks" now spur a "oh, that sucks and I should share it with the world."

But to garner the attention from companies, their friends, and the public at-large, onstage haters often have to up their rhetorical game, to stand out amid the same messaging clutter that companies have to face when trying to market their wares.

"The complainers? They have to break through the noise as well," Mason Nelder concurs. Which is why many onstage haters' complaints are delivered in an outlandish and overwrought fashion, way out of proportion to the seriousness of the issue. On first contact, we right-size our channel (smaller problems are registered with onstage complaints) but we do not right-size how we describe our angst.

I implore you to spend 45 glorious minutes watching the YouTube channel of a production company called Gotta Kid to Feed. The channel is titled "Real Actors Read Yelp Reviews," and it's a hilarious collection of 23 (and counting) short videos. They illustrate precisely what I mean about onstage haters' employing amazing rhetorical flourishes to get noticed.

British Airways: What Not to Do

To stand out and make sure they are heard, onstage haters sometimes go beyond inflammatory language and ensure they have an audience (from the company and beyond)—by buying it.

In 2013, Hasan Syed's father flew British Airways to Paris, and his luggage was lost. Syed went to the British Airways Twitter account to complain, but found that the account was not monitored during the evenings. Frustrated, Syed spent more than $1,000 to buy advertising on Twitter, delivering a tirade of anti-British Airways tweets to hundreds of thousands of users.

He specifically targeted followers of the British Airways Twitter account with "Thanks for ruining my EU business trip #britishairways. I shouldn't have flown @BritishAirways. Never flying with you again."

Despite the scope and scale of this rancor, British Airways replied with this: "Sorry for the delay in responding, our Twitter feed is open 0900-1700 GMT. Please DM your baggage ref and we'll look into this." 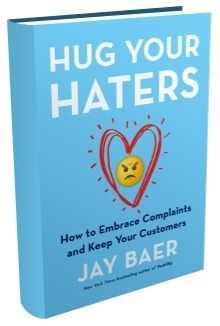 Remember, haters aren't the problem. Ignoring them is. British Airways has flights around the clock. Yet its customer service is open 10 hours per day, at least on Twitter. Without that gap, would Syed have purchased ads? Of course not.

In such situations, hugging your online haters can be a major competitive differentiator.

This article was drawn from Jay Baer's Hug Your Haters: How to Embrace Complaints and Keep Your Customers, the first customer service and customer experience book written for the modern, mobile era and based on proprietary research and more than 70 exclusive interviews.

Eight Types of Online Reviewers, and How to Handle Them [Infographic]

Online Reputation Management 101: What You Need to Know [Infographic]

What Consumers Pay Attention to in Local Business Reviews

Continue reading "What an Online Hater Really Wants From You" ... Read the full article

Jay Baer is a best-selling author of six books and has spent 25 years in digital marketing and CX. His firm—Convince & Convert—provides word of mouth, digital marketing, and customer experience advice and counsel to some of the world's most important brands.