Twitter Users Want Brands to Respond to Their Complaints

Twitter users who use the microblogging platform to lodge complaints about bad customer experiences say they expect companies to read and respond to their complaints, according to a poll from Maritz Research. Most companies, however, don't appear to be listening.

Among frequent Twitter users* age 18 and older who have issued a complaint to a company via Twitter, roughly one-half say they expect their tweets to be read. 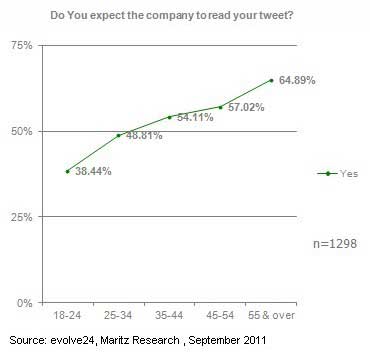 Below, additional findings from a study by Maritz Research and its social intelligence arm, evolve24.

But few companies appear to be listening. Among Twitter users who have issued a complaint to a company via Twitter, only (33%) say they have received some type of follow-up to their complaint.

Among those who have received responses to their complaints: 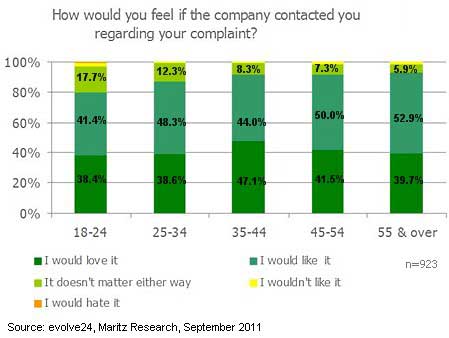 As for the two-thirds (63%) of Twitter users who say they have not received answers to their complaints, 86% say they would have liked or loved to hear from the company.

However, a striking 63% say they would hate or not like it if the company contacted them about something other than their complaint.

* People who self-identify themselves at Twitter users who frequently send tweets.

About the data: Maritz Research surveyed an online panel of 1,298 US consumers, who had pre-identified themselves as Twitter users who frequently tweet, had complained via Twitter about a company with whom they do business, and who age 18 or older, Sept 9-12, 2011.