People who follow brands on Twitter say they are more likely to buy products from the brands they follow and more likely to recommend those brands to friends, according to a new study by Constant Contact and Chadwick Martin Bailey.

Following brands on Twitter motivates people to recommend those brands: Fully six in ten brand followers say they are likely to recommend a few (42%) or many (18%) brands to friends after following them on Twitter. 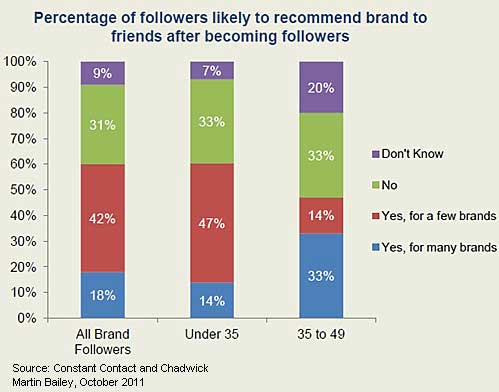 Older brand followers (age 35-49) are less likely to recommend a few (14%) or many (33%) brands to friends after following them on Twitter.

Being the First to Know

Most (64%) Twitter users who follow brands say they do so because they are already a customer, but early access to information is key for many Twitter followers: 61% follow brands in order to be the first to receive information about the brand, while 48% are motivated by discounts and promotions. 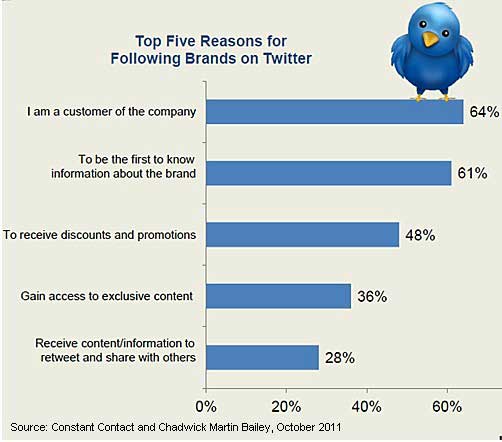 Followers Tend to Stay With Brands

Only 13% of brand followers say they have "un-followed" a brand, whereas 75% have never done so with fans over age 35 the most likely to remain a brand follower, according to the study. 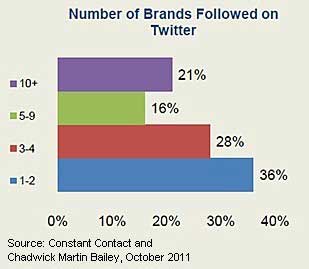 Brand followers are becoming more active with brands on Twitter: 33% of such followers report interacting with brands more this year than they did last year, whereas 57% are interacting at the same level. Men are increasing their rate of brand interaction more than women, 38% vs. 27%.

In addition, nearly half (47%) of Twitter users have been tweeting less than one year.

About the data: Findings are from a survey of 1,491 US consumers ages 18 and older, conduct via the Research Now online panel by Chadwick Martin Bailey with Constant Contact, January 2011.