Total US mobile and social media revenues—including business and consumer content, access, and advertising and marketing—reached $45.38 billion in 2011, up 30.2% from a year earlier, according to new data from PQ Media.

Among three broad categories of mobile and social media revenues—mobile advertising and marketing, mobile content and access, and online social media—mobile advertising and marketing was fastest-growing sector in 2011, expanding 53.7% year over year to $3.39 billion with the ad segment soaring 60.9% and the marketing segment expanding 46.2% during the year. 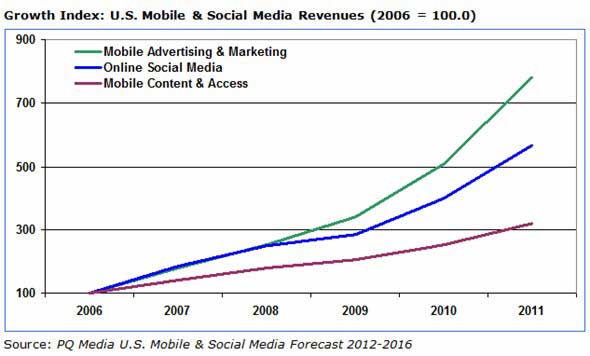 However, the mobile marketing segment is now forecast to grow faster than advertising from 2012 to 2016, fueled by location-based coupons and marketing apps revenue streams.

Other findings from PQ Media's US Mobile and Social Media Forecast, 2012 to 2016:

Together, mobile and social media accounted for 4.1% of the overall communications industry revenues in 2011, up from only 1.3% in 2006. 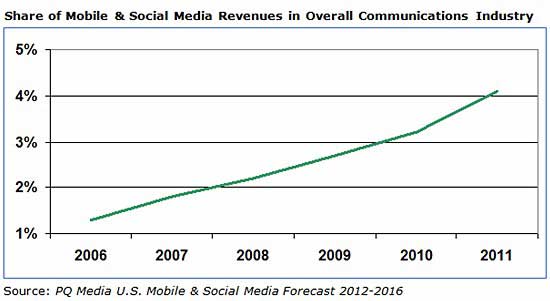 Total US mobile and social media revenues—including consumer and business access, content, advertising and marketing—is expected to grow 30.8% year over year in 2012 on higher business and consumer demand.

"The mobile media sector alone reached the $1 billion revenue mark faster than any communications industry in history in 2008, taking only five years compared with 16 for the Internet," said Patrick Quinn, CEO of PQ Media.

"Mobile will also reach the $100 billion mark in 2015 faster than any other communications industry, driven by several key growth drivers, including strong growth in overall mobile device penetration, the transition to smartphones and tablets, the torrent of new mobile content launches, and the continued growth of consumer and business time spent with mobile media."