Introducing Paper. Surprise! Facebook's launched Paper, a gorgeous news reader app that puts its actual mobile newsfeed to shame. Scroll through front-page news, shared videos, and images. It's also super-easy to create your own stories. It isn't clear yet how advertisers will feature in, but start playing with it to get first-mover advantage on what the interface offers. The app launches February 3.

The Grammys. An epic performance from Daft Punk, Stevie Wonder, and Pharrell's hat isn't all the Grammy's gave us; brands also stole some spotlight. Digiday's got a full lineup of brand Tweet wins and fails. Some were just really weird... but at least they're trying. Complex won the night, though the brand it most benefited was perhaps not its own; meanwhile, Gain tried its Photoshoppin' hardest to keep up.

That ain't enough for you? These winning Grammy GIFs may soothe your soul. OMG, it's Paul and Ringo!

Super Bowl prep: socnet users share ads, women share (and buy) most. AdAge prepared a survey of who's buying what for Super Bowl 2014: Axe is buying one 30-second ad; Anheuser-Busch InBev's nailed down five (three for Bud Light, two for Budweiser). But don't focus on the boys: Women are the Super Bowl's dominant media voice.

In Kat Gordon's words (appropriately 140 characters long): "Women watch equally, buy + share in greater #s than men on Super Bowl Sunday. Ads with female appeal = best return on $4 million price-tag." So if you're looking to score, shoot for the ladies—even if you just do it on Twitter, because 61% of Super Bowl viewers will share the ads on social media.

To get you pumped, we give you Volkswagen's epic Super Bowl entry, which has already garnered 3.5 million views, and counting:

Twitter: squeezing cash out of the impulse refresh. This week Twitter released a few updates, including the ability to crop photos you share. It's also trying to better monetize reloads: When people reload and there's no new content, the site will serve recommended Tweets, trending topics, and suggestions for new accounts to follow. In the US, this list will also include TV, sports, and news updates. For you, this means more real-time ad space... and more potential clicks. (Fun fact: did you know Twitter holds a patent on the scrollable refresh trigger? True story.) 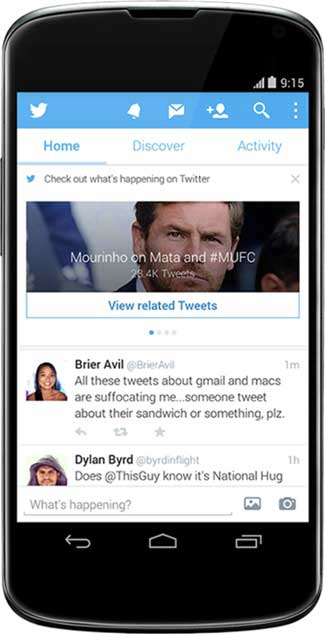 How companies use Twitter. Simply Measured's published a study that pits the Twitter activity of big brands against small ones. Of the Interbrand Top 100 brands, 98% Tweeted at least once per day in 4Q13, compared with brands in the Forbes 100 Best Small Companies list... 56% of which don't Tweet daily.

Facebook: now a mobile ad firm. Apt news considering its Paper launch: the 'Book announced its Q4 results... and it's sporting revenues of $2.59 billion. Some 53% of its ad revenue now comes from—you guessed it!—mobile users, which total 945 million people per month. Q4 was its first billion-dollar mobile ad revenue quarter, which is good news for FB app developers, who are enjoying wider reach thanks to compulsive mobile Facebook use. 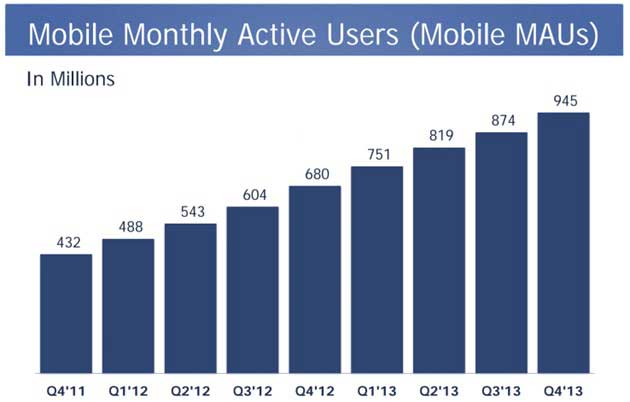 Get an easier Facebook conversion. Facebook's launching new call to action (CTA) buttons for advertisers on its site and mobile app: Shop Now, Learn More, Sign Up, Book Now, and Download. You'll soon be able to find them in the lower right-hand corner of your Page post ads. Brands already using the feature include women's activewear company Zaggora, which got 3-6 times return on its ad spend. You can also advertise to people based on actions they've taken on specific times within your app—or exclude them, as you like.

Last but not least on Planet Facebook, last week we told you about that Princeton study that estimates Facebook will lose 80% of its peak user base between 2015 and 2017. (The conclusion was made by comparing social network activity to the activity of viruses.) Facebook retaliated with a parody study that finds Princeton will be dead to the world by 2021. In its own words: "Looking at page likes on Facebook, we find the following alarming trend": 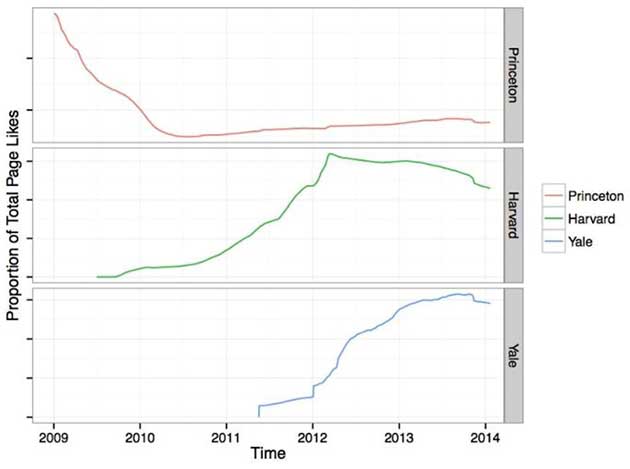 Awkward. Is it time for us to stop talking about Facebook now? Probably. We'll let you #skim to the next subject with a quiz that's flooding our feeds: How much time have you wasted on Facebook?

FINALLY! A social app map for business. This is one to bookmark: Software Advice brings you The Social App Map, which provides information on 68 top social business apps, including basic features, why they're unique, target-customer size, pricing model, and price range. Find the social app that suits you best, based on your own personal criteria. Screenshots below. 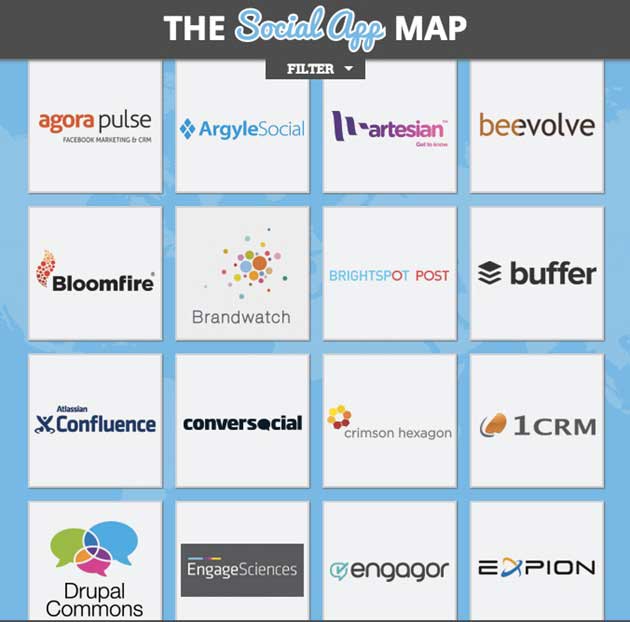 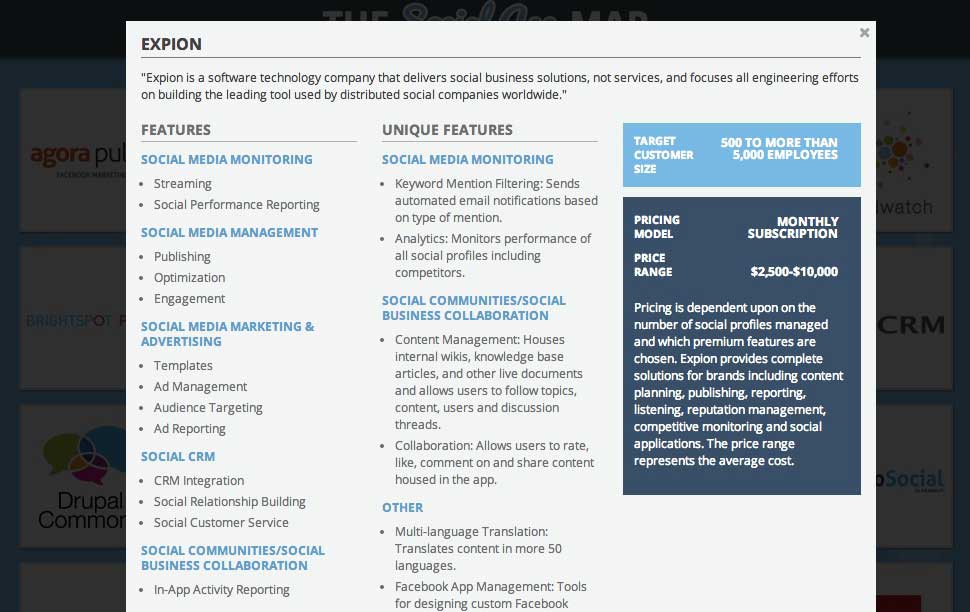 Hootsuite: data'd up and Alerts-ready. HootSuite's purchased uberVu, which will improve its social analytics capacities in two ways: more data for clients about customers, and access to uberVu's 200 enterprise customers, which include Heinz, Getty Images, and 3M. If you use the free version, you'll also be jazzed to know that Talkwalker released a free Alerts app that you can manage directly from your HootSuite account. Use it as a replacement for Google Alerts, and see results right in your dashboard: 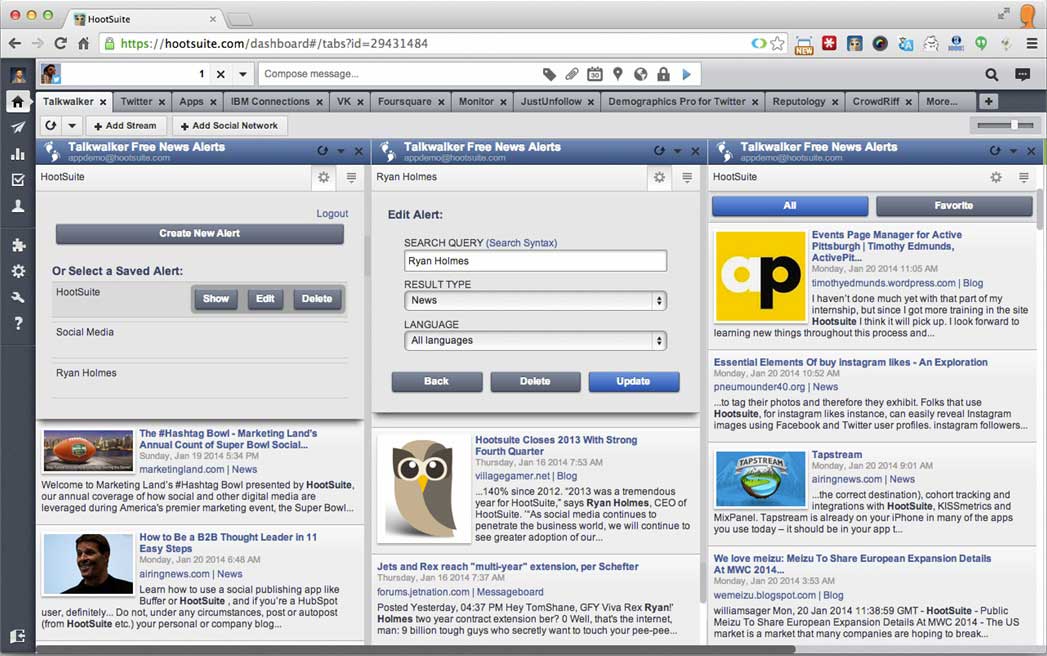 Which images will take you viral? Imgur, an image-hosting platform for social-sharing sites, like Reddit, launched an analytics platform that will help you gauge the life of your images across social networks. It will help Imgur attract more advertisers, who are under pressure to produce images that don't just market but tell a story. Track image views over time, graph them by date range or hour, see traffic referral sources, and get detailed traffic referral paths. Imgur says viral images usually explode on the first day—meaning the platform can help you to best use the images doing well in the first few hours. 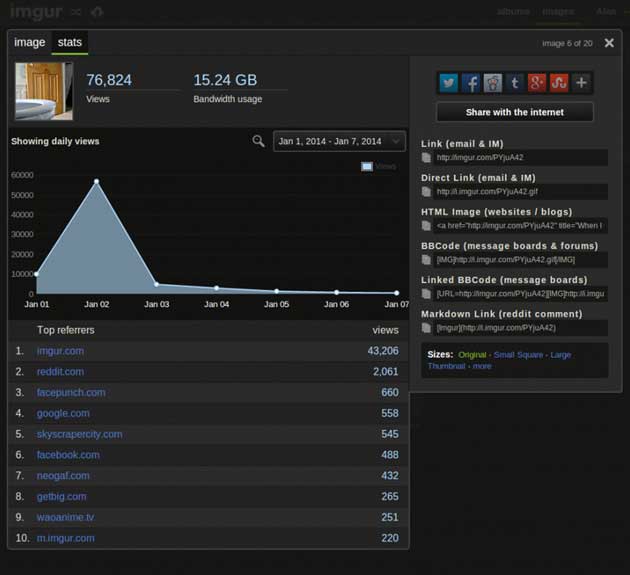 Team USA athletes on Instagram. Looking for ways to promote your message during the Olympics? Glean inspiration from Team USA, whose Instagram names were published (by sport!) so you can track their activities over the course of the Games. Don't forget that in addition to photos, you can Instagram video collages, like this one by snowboarder Jamie Anderson:

Let's wrap with inspiration from Ogilvy. John Bell created a (very orange) gallery of tips on how to make your content more shareable, using seven basic principles of social design. See the gallery, and read the whole story, on FastCoCreate. 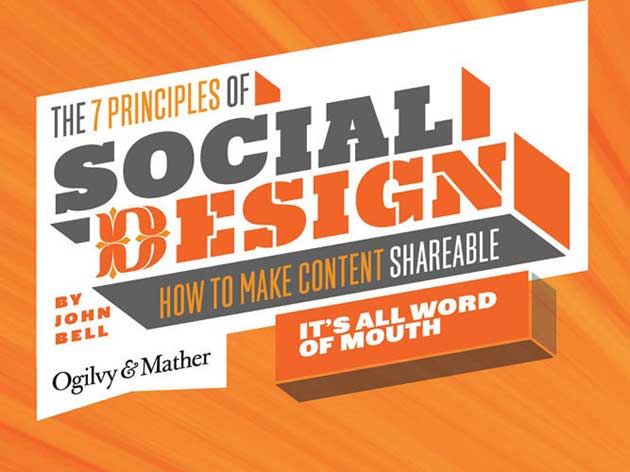