And while the Academy of Motion Picture Arts and Sciences was declaring the winner in each category, folks on social media networks were discussing the Oscars (553,195 total mentions) and naming their own winners.

Let's look at the Oscars from a social media perspective, thanks to Viralheat.

Not surprisingly, the winners for Best Actor and Best Actress received the most social media mentions during the event. 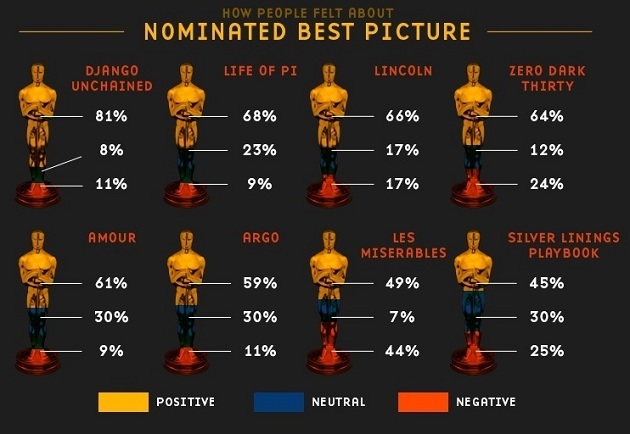 Folks on social networks made running commentaries about the winners announced during the televised event. So, how did people feel about the nominated best pictures?

Part of the allure of the Oscars is the fashion (what are celebs wearing?) and celebrity couples (who attended with whom?). Both are on sparkly display during the red carpet portion of the event, when the Academy Awards event attendees make the walk from their limos to the doors of the Dolby Theater. Here's a look at the mentions over time for the red carpet segment. 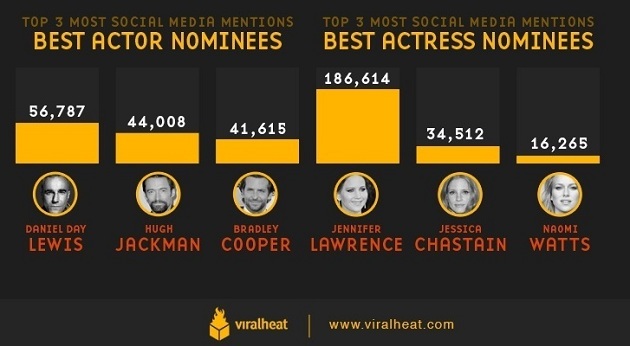 So, which actors and actresses received the most social media mentions during the Academy Awards presentation?

Best Actor winner Daniel Day Lewis received the most mentions (56,787) among his fellow nominees, which may be a result of his being the only actor to receive three Oscars in his career.